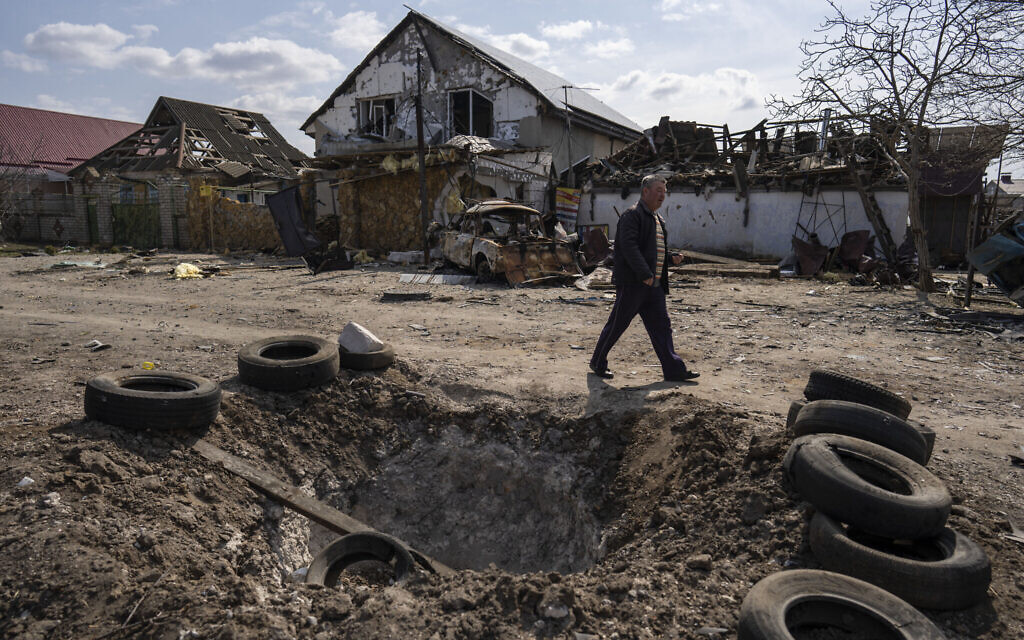 KYIV, Ukraine (AP) – In what could signal an important narrowing of Moscow’s war aims, the US said Russian forces appear to have halted, at least for now, their ground offensive aimed at capturing the capital, Kyiv, and are concentrating more on Gaining control of the Donbas region in the country’s southeast – a shift the Kremlin seemed to confirm.

Ukrainian President Volodymyr Zelensky again appealed to Russia to negotiate an end to the war, but pointedly said Ukraine would not agree to give up any of its territory for the sake of peace.

“The territorial integrity of Ukraine should be guaranteed,” he said in a nightly video address to the nation. “That is, the conditions must be fair, for the Ukrainian people will not accept them otherwise.”

While the Russians continue to pound the capital from the air, they appear to have gone into a “defensive crouch” outside Kyiv and are focused more on the Donbas, a senior US defense official said, speaking on condition of anonymity to discuss the Pentagon’s assessment. .

“They don’t show any signs of being willing to move on Kyiv from the ground,” the official said.

In comments that seemed to corroborate a change in Moscow’s military goals, Col.-Gen Sergei Rudskoi, deputy chief of the Russian general staff, said the main objective of the first stage of the operation – reducing Ukraine’s fighting capacity – has generally been accomplished. , “Allowing Russian forces to focus on” the main goal, liberation of Donbas. “

The Donbas is the largely Russian-speaking eastern part of the country where Russian-backed separatists have been fighting Ukrainian forces since 2014 and where many residents desire close ties to Moscow. Its coal-mining and industrial Donetsk and Luhansk regions are recognized by Russia as independent.

A member of the Ukraine territorial defense unit prepares to go to the front line in Yasnohorodka, on the outskirts of Kyiv, Ukraine, Friday, March 25, 2022. (AP Photo / (AP Photo / Rodrigo Abd)

Britain’s Ministry of Defense said Ukrainian forces have been counterattacking and have been able to reoccupy towns and defensive positions up to 35 kilometers (22 miles) east of Kyiv as Russian troops fall back on their overextended supply lines. In the south, logistical problems and Ukrainian resistance are slowing the Russians as they look to drive west toward the port of Odesa, the ministry said.

In fact, the Russians are no longer in full control of Kherson, the first major city to fall to Moscow’s forces, the senior US defense official said. The official said the southern city is being contested by the Ukrainians in heavy fighting. The Kremlin denied it had lost full control.

The Russian military said 1,351 of its soldiers have died in Ukraine and 3,825 have been wounded, though it was not immediately clear if that included the separatists in the east or others not part of the Defense Ministry, such as the National Guard. Earlier this week, NATO estimated that 7,000 to 15,000 Russian soldiers had been killed in four weeks of fighting.

Rudskoi’s surprise statement came as a Western official reported that a seventh Russian general, Lieutenant General Yakov Rezanstev, had died in Ukraine and that a colonel had been “deliberately” killed by his own demoralized men.

Earlier Friday, Ukrainian authorities said that about 300 people were killed in the Russian airstrike last week on a Mariupol theater that was being used as a shelter, in what would make it the war’s deadliest known attack on civilians yet.

The bloodshed at the theater fueled allegations Moscow is committing war crimes by killing civilians, whether deliberately or by indiscriminate fire. 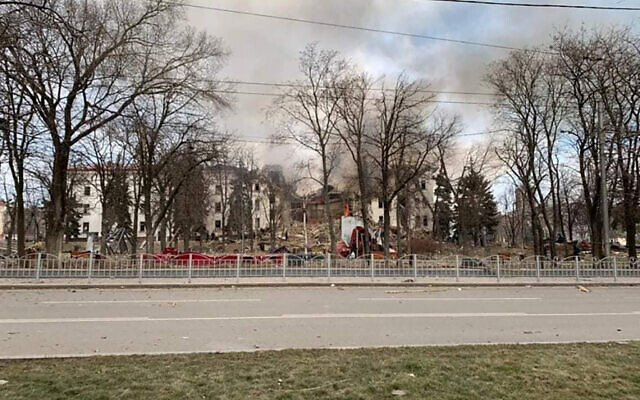 For days, the Mariupol government was unable to give a casualty count for the March 16 bombardment of the grand, columned Mariupol Drama Theater, where hundreds of people were said to be taking cover, the word “CHILDREN” printed in Russian in huge white letters. on the ground outside to ward off aerial attack.

In announcing the death toll on its Telegram channel Friday, the city government cited eyewitnesses. But it was not immediately clear how witnesses arrived at the figure or whether emergency workers had finished excavating the ruins.

US President Joe Biden’s national security adviser, Jake Sullivan, said the theater bombing was an “absolute shock, particularly given the fact that it was so clearly a civilian target.” He said it showed “a brazen disregard for the lives of innocent people” in the besieged port city.

The Ukrainian Parliament’s human rights commissioner said soon after the attack that more than 1,300 people had taken shelter in the theater, many of them because their homes were destroyed. The building had a basement bomb shelter, and some survivors did emerge from the rubble after the attack.

“This is a barbaric war, and according to international conventions, deliberate attacks on civilians are war crimes,” said Mircea Geoana, NATO’s deputy secretary general.

He said Putin’s efforts to break Ukraine’s will to resist are having the opposite effect: “What he’s getting in response is an even more determined Ukrainian army and an ever more united West in supporting Ukraine.”

For civilians, the misery is growing more severe in Ukrainian towns and cities, which increasingly resemble the ruins that Russian forces left behind in their campaigns in Syria and Chechnya. 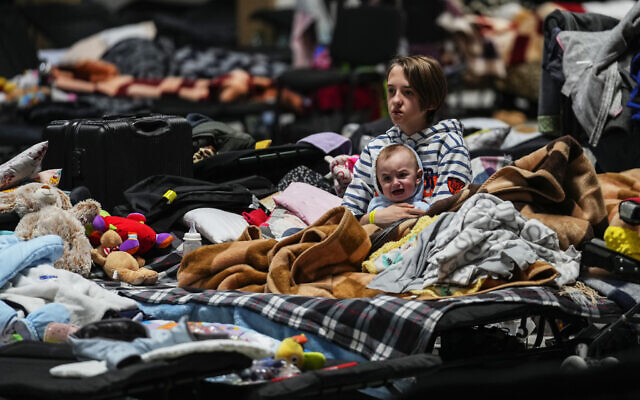 In the village of Yasnohorodka, some 50 kilometers (30 miles) west of Kyiv, Russian troops who were there earlier in the week appeared to have been pushed out as part of a counteroffensive by Ukrainian forces.

The tower of the village church was damaged by a blast, and houses on the main crossroads lay in ruins.

As for Mariupol, “nothing remains of Mariupol,” said Evgeniy Sokyrko, who was among those waiting for an evacuation train in Zaporizhzhia, a way station for refugees from the shattered port city. “In the last week, there have been explosions like I’ve never heard before.”

Oksana Abramova, 42, said she ached for those left behind in the city, who have been cut off from communication with the shelling of cell, radio and TV towers and do not have the means to escape.

“All the time I think about how they are, where they are. Are they still hiding, are they alive? Or maybe they are no longer there, ”she said.

In Kyiv, ashes of the dead are piling up at the main crematorium because so many relatives have left, leaving urns unclaimed. And the northern city of Chernihiv is all but cut off after Russian forces destroyed bridges, leaving people without power, water and heat, authorities said.

For the vulnerable – the elderly, children and others unable to join millions heading westward – food shortages are mounting in a country once known as the breadbasket for the world. 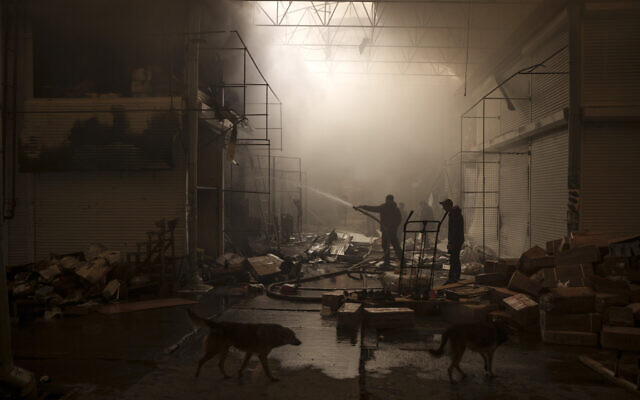 People try to extinguish a fire in a market after a Russian attack in Kharkiv, Ukraine, Friday, March 25, 2022. (AP Photo / Felipe Dana)

In relentlessly shelled Kharkiv, hundreds of panicked people took shelter in the subway, and a hospital emergency room filled with wounded soldiers and civilians.

Mostly elderly women lined up stoically to collect food and other urgent supplies this week, as explosions thudded in the distance. Fidgeting with anticipation, a young girl watched as a volunteer’s knife cut through a giant slab of cheese, carving out thick slices, one for each hungry person.

“Among those who stayed, there are people who can walk on their own, but many who cannot walk, the elderly,” said Hanna Spitsyna. “All these people need diapers, swaddle blankets and food.”