Yes, that was the most chaotic Oscars in history

Home /Movies/Yes, that was the most chaotic Oscars in history 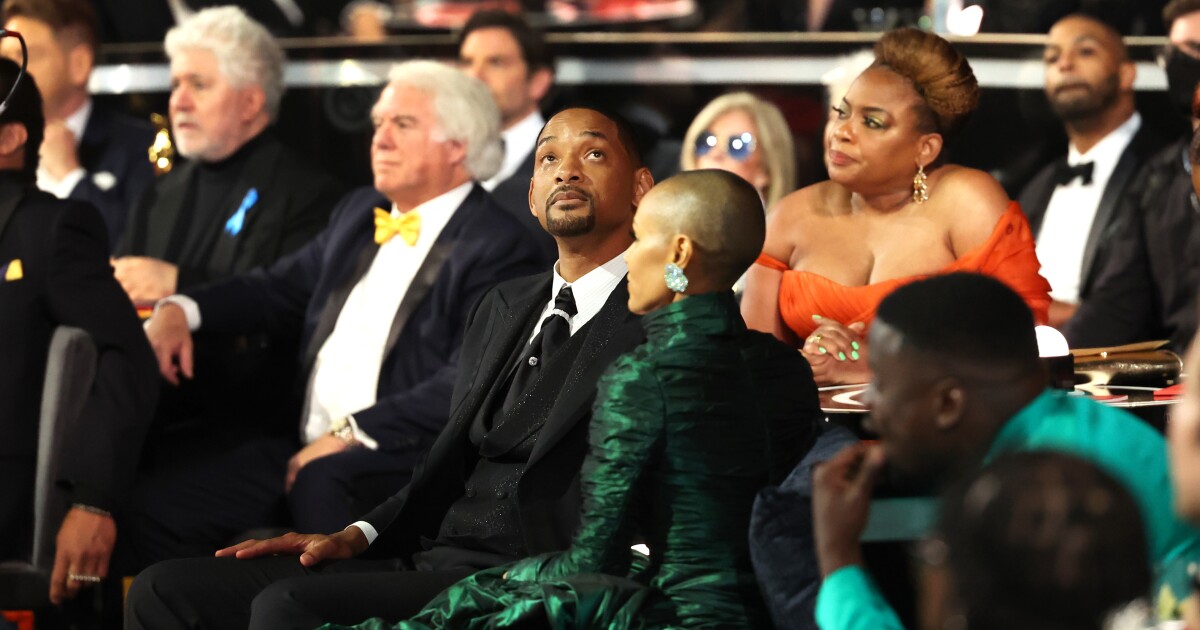 “CODA,” a heartwarming, low-budget film released by a global tech giant far better known for smartphones than cinema, won the best picture award at the 94th Academy Awards on Sunday night, a watershed moment not only for the Oscars but for the film industry as a whole.

And Will Smith, one of Hollywood’s biggest stars, slapped comedian Chris Rock across the face onstage in front of millions of viewers over a joke about his wife, Jada Pinkett Smith – then went on to win the lead actor prize for his performance in “King” Richard. ”

Suffice to say, the 2022 Oscars will be one for the history books. And not for the reasons the academy – or Hollywood at large – may have hoped.
Accepting his Oscar less than an hour after striking Rock, Smith, overcome with emotion, delivered a nearly six-minute speech through copious tears.

Denzel [Washington] said, ‘At your highest moment, be careful because that’s when the devil comes for you,’ “said Smith, who was seen huddling with fellow nominee Washington after the incident. “I want to be a vessel for love. … I want to apologize to the academy. I want to apologize to all my fellow nominees. Art imitates life. I looked like the crazy father, just like they said about Richard Williams. But love will make you do crazy things. “

The victory for “CODA,” which was released by Apple and centers on the relationship between a hearing, music-loving teenager and her deaf parents and brother, marks the first time a film from a streaming company has claimed the top prize at the Oscars. . It signals a long-anticipated changing of the guard at a moment of deep existential uncertainty for the movie business, as audiences have shifted away from theater-going and major studios have largely backed away from the sort of artistically ambitious, adult-oriented fare that has long ruled the awards.

In winning the best picture prize, Apple – which acquired “CODA” for a record-setting $ 25 million at last year’s Sundance Film Festival – beat out a varied field that included two films released by Netflix, “The Power of the Dog” and “ Don’t Look Up, ”along with bigger-budget, studio-backed fare such as“ West Side Story, ”“ Dune, ”“ King Richard ”and“ Nightmare Alley ”and such indies as“ Drive My Car, ”“ Belfast ”And“ Licorice Pizza. ”
But, in what will certainly go down as one of the most shocking moments in the awards’ nearly century-long history, this year’s Oscars may end up being best remembered for something that no one could have imagined heading into the night.

More than two hours into the show, while introducing the award for documentary feature, Rock attempted to make a joke at the expense of Pinkett Smith, who has spoken of having a hair-loss condition. “I can’t wait to see you in ‘GI Jane 2,'” Rock cracked, referring to a film in which Demi Moore played a soldier with a shaved head.

Moments later, Smith stormed to the stage and slapped Rock across the face, leaving Rock – and the audience both in the Dolby Theater and probably at home – gasping in stunned silence. “Keep my wife’s name out of your mouth!” Smith yelled at Rock, as ABC’s censors bleeped out the profanity.

“That was the greatest night in the history of television.”

“That was the greatest night in the history of television,” said a shaken Rock, fumbling for words.

Shortly after the incident, as those in attendance and watching at home tried to catch their breaths, Rock was heard joking backstage, “I just got punched in the face by Muhammad Ali and didn’t get a scratch.” (Smith played Ali in a 2001 biopic in a performance that landed him an Oscar nomination.)

Until that moment derailed the mood, the night had been all about celebrating a return to one of Hollywood’s most cherished traditions.

As glamorous stars strutted and twirled on the red carpet for the first time in two years, with many wearing ribbons in support of Ukraine but almost no one wearing masks, Hollywood’s collective sense of relief at returning to something resembling normal was palpable. COVID-19 restrictions were strict, however, following a suspected outbreak of infections at the British Academy Film Awards this month.

But despite the air of celebration at the return of a full-on Oscars extravaganza with all the familiar bells and whistles, the show arrived at a difficult moment not only for the beleaguered film industry but for the academy as an institution, as the academy struggles. to rebound from last year’s widely panned telecast, which drew a record-low 10.4 million viewers.

Under pressure by ABC to boost the ratings and hoping to trim a few minutes from the often bloated telecast, academy leaders shifted some of the emphasis of this year’s ceremony away from the less starry awards in favor of more populist entertainment, sparking bitter controversy within the organization in recent weeks. Even as ABC rallied viewers with the tagline “Movie Lovers Unite,” the academy devolved into bitter infighting over the decision to hand out eight below-the-line and short-film awards outside of the live ceremony.

Early in the telecast, co-hosts Amy Schumer, Regina Hall and Wanda Sykes attempted to defuse any lingering tension over the changes among the crowd gathered in the Dolby Theater, and most in attendance seemed ready to let it go for the moment.

“It was a controversial and difficult decision, but I think we’ve moved on,” Sykes said, only to have the lights appear to flicker and the sound to go staticky. “We’re all in the union!” Sykes jokingly protested.

But any tension in the room was nothing compared to the mood that overtook the show after Smith struck Rock – or when Smith later won the lead actor award.

For Netflix, which has long coveted the validation of a best picture prize and has had four films in contention prior to this year, losing to Apple in its first shot at an Oscar carries a particular sting. The streamers’ “The Power of the Dog” came into the night with 12 nominations, the most of any film, only to lose to a heartstring-tugging underdog that earned only three nominations, the least of any best picture winner since 1932’s “Grand Hotel. ”

In the run-up to the Oscars, there was as much heated debate in Hollywood over how this year’s awards would be presented as who would win them.

For weeks, the academy’s decision to hand out eight crafts and short-film awards off-air in the hour before the telecast began – an effort aimed at trimming the show’s often bloated running time – drew widespread criticism from industry organizations, academy members and cineastes alike, casting a shadow over the show and highlighting uncomfortable questions about the very meaning of the awards.

But while attendees seemed intent on not airing the debate on air, not everyone was happy with how the show handled the affected categories. “It didn’t feel like part of the show,” producer Bonni Cohen, a nominee for the documentary short “Lead Me Home,” told The Times mid-way through the telecast. “I understand that this awards show is the only money-making device that the academy has and they’re trying to figure out ways to make it watchable. But I don’t think this is the solution. None of the filmmakers are happy about this. “

Speaking backstage after winning for the animated short “The Windshield Wiper,” director Alberto Mielgo was more conciliatory. “At first we were all extremely… you know, it was like an indignation,” Mieglo said. “But then one day after the war [in Ukraine] Kind of came up, it felt a little bit frivolous to protest because things are really tough over there. But then I think they handled it well. I understand that extra minutes count. It was very nice to see the whole theater full. But I hope this is the last year that they do that. “

Meanwhile, Jane Campion’s best director victory for “The Power of the Dog” marked the first time two female filmmakers have won the directing prize in consecutive years following Chloé Zhao’s directing win last year for “Nomadland” – and only the third time a woman has ever won the award.

Troy Kotsur also made history as the first deaf man to win an acting Oscar for his moving performance as the father in “CODA.” (Kotsur’s co-star Marlee Matlin, who plays the film’s mother, was the first deaf performer to win an Oscar for the 1986 drama “Children of a Lesser God.”) The audience stood and signed their applause for the actor, some with tears. in their eyes.

Winning the supporting actress prize for playing Anita in “West Side Story” – a role for which Rita Moreno won the same award six decades ago – Ariana DeBose became the first openly queer woman of color to win an Oscar for acting.

In a gambit aimed at luring casual movie fans who may not have seen some or all of the nominated films, the telecast introduced the Oscars’ first-ever fan-favorite award, voted on via Twitter. The subject of widespread derision among academy members and cineastes alike in the run-up to the show, the top-vote getter in the end was Zack Snyder’s Netflix zombie heist film “Army of the Dead.” Another segment highlighting the greatest movie “cheer moments,” as voted on by fans, included a scene from the critically lambasted comic-book blockbuster “Justice League” – also directed by Snyder, who has a rabid army of online devotees – at number one .

After all the impassioned debate over how best to streamline the show to bring it in under three hours, in the end, the most chaotic telecast in Oscars history clocked in at three hours and 40 minutes – 21 minutes longer than last year’s show.