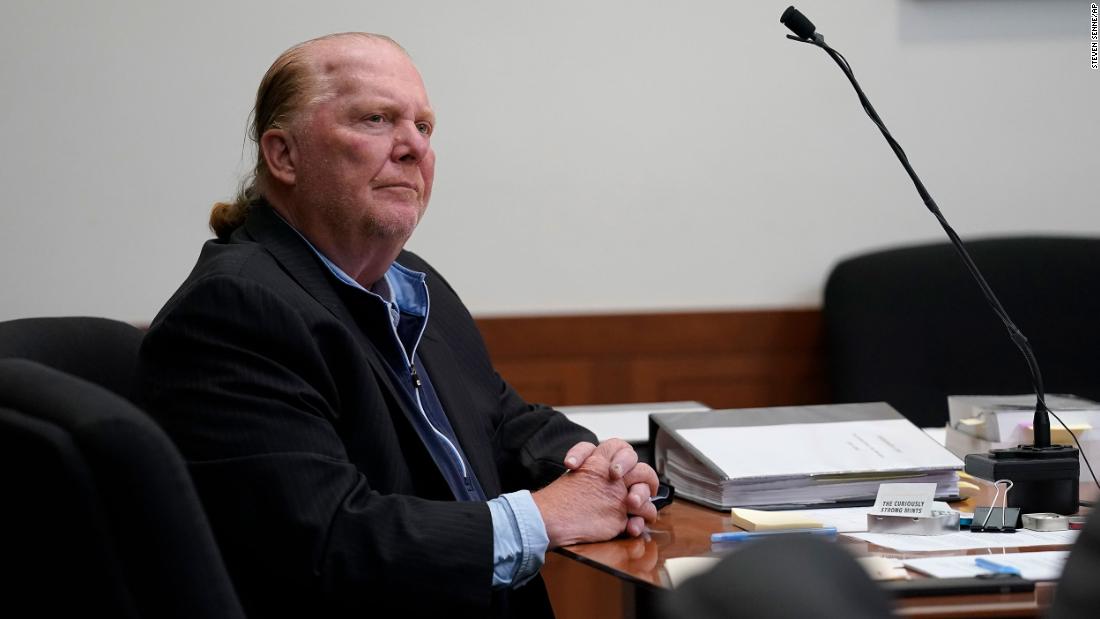 Natalie Tene said she posed for photos with Batali while, out-of-frame, he took advantage of the star-struck patron as she was standing close to him for the photos.

“His right hand is all over my breasts, all over my rear end, all between my legs,” Tene said. “I’ve never been grabbed like that before … squeezing my vagina and pulling me closer to him. As if that’s a normal way to pull someone in.”

He has denied the allegations and pleaded not guilty. Defense attorney Anthony Fuller said during his opening statement Monday, “The photos and videos don’t support her testimony.”

Batali waived his right to a jury trial in favor of a bench trial, which the judge accepted. He was charged in 2019 and faces a civil suit over the same incident.
Multiple allegations against Batali – a chef and restauranteur who appeared on television cooking shows for more than two decades – surfaced in 2017 after the restaurant news website Eater reported four accounts of women who claimed Batali “touched them inappropriately in a pattern of behavior that appears to span at least two decades. “
Batali stepped away from public view in the wake of the allegations and his restaurant group cut ties with him in 2018.
The New York Police Department also reviewed sexual misconduct allegations against Batali, but closed its two investigations in 2019 without filing charges.

The evening started, Tene testified Monday, when she met a friend at around 9 pm on March 31, 2017, at Towne Stove and Spirits, a restaurant in Boston the pair frequently visited.

Tene recognized Batali taking a seat near her at the bar around midnight, she said. Batali was a few seats away when she tried to covertly take a photo of him on her phone, she testified.

“He said, ‘No, it was fine, no worries, let’s actually take some selfies instead,'” Tene testified.

Tene took about 10 selfies with her phone at around 12:37 am, she said, and their heads, faces, shoulders and whatever could fit in the frame were visible.

“He has his face pressed up against mine and he’s pulling my body closer to his,” she said.

“He’s kissing the side of my face. He has his other arm wrapped behind me,” Tene said as the photos were displayed in court. She noted that they took a few photos, saying they weren’t good because they weren’t looking at the camera.

Batali kept asking to take more selfies and can be heard asking, “Does that work” in one of the live photos, she said.

“It all happened so fast and it was happening the whole time, in different parts,” Tene said, recapping the ways Batali allegedly grabbed her. “I kind of froze up to be honest. Put on a smile to de-escalate the situation. Kind of nervous, shocked, alarmed,” she said.

Tene noticed Batali’s eyes weren’t open in some of the photos and he reeked of alcohol, she testified. “This guy was wasted, for lack of a better term,” Tene said.

Batali then allegedly asked Tene to come to his hotel room, she testified, saying she got chills when he asked.

“Kind of like, mortified, disgusted,” Tene said. “That sensation that this was not right. Overall, this was very uncomfortable.”

Tene left and went back to her house. Later, she told her friend about the alleged attack and said the pair agreed to never eat again at Eataly, an Italian food market co-owned by Batali at the time.

Tene later testified she spoke to a journalist at Eater, detailing her account after the reporter wrote a story about other women who had been allegedly grabbed by Batali, Tene said.

Tene hired legal representation and filed a civil suit, she said, but says she isn’t looking for money.

“This happened to me and this is my life and I want to take control of what happened, come forward and say my piece,” Tene said.

Fuller, the defense attorney, cross-examined Tene, quizzing her about the night of the alleged assault and her subsequent motives.

Fuller went through each of the images Tene took of her and Batali and focused on one photo that showed space between where they stood, highlighting that floor tile was visible in the photo between the two.

“He was grabbing you, pulling you closer, was he?” asked Fuller, who said there was roughly eight inches of space between the pair.

“He definitely was,” Tene responded.

“Doesn’t look like it in this photo,” Fuller said.

Fuller highlighted a gap in time between the first batch of photos and the second batch, three minutes later. Fuller argued the gap in time showed she wasn’t in danger. He also challenged Tene on her facial expressions in the photos, saying it wasn’t a grimace like she testified, but a smile.

Tene was also questioned about eating at Batali-owned restaurants, even though she told investigators in a deposition the thought of eating at those restaurants was disgusting. Fuller showed her bank statements that revealed she ate at Eataly with a friend who knew about the alleged attack.

Fuller also showed pictures in court that were taken in the same bar, Towne Stove and Spirits, where the alleged attack took place, the night before Eater was set to publish a story with her allegations.

“Towne wasn’t the scary place, it was the scary person. I was pretty comfortable there,” Tene responded when asked why she wasn’t triggered by being in the same spot and returning multiple times after the alleged attack.

“I’m not looking for anything, I’m not seeking any particular amount,” Tene said. “What other way is there to make this situation right? I’ve never been in a situation like this before.”

Fuller spent the rest of his cross examination attempting to establish inconsistencies in Tene’s story, talking about her alleged attempts to get out of jury duty and alleging that she laughed off the incident over texts with her friends.

Prosecutors plan on calling a witness to the stand Tuesday morning who they say heard the whole story from Tene about a week after the alleged groping incident.

Ernesto Castro
Collectives, NILs Combining To Kill College Football And Basketball As We Know It
‘Never Let Me Go’ Series in Development at FX