Winning Time Finale Recap: Can the Lakers Win It All Without Kareem?

Home /TV Series/Winning Time Finale Recap: Can the Lakers Win It All Without Kareem? 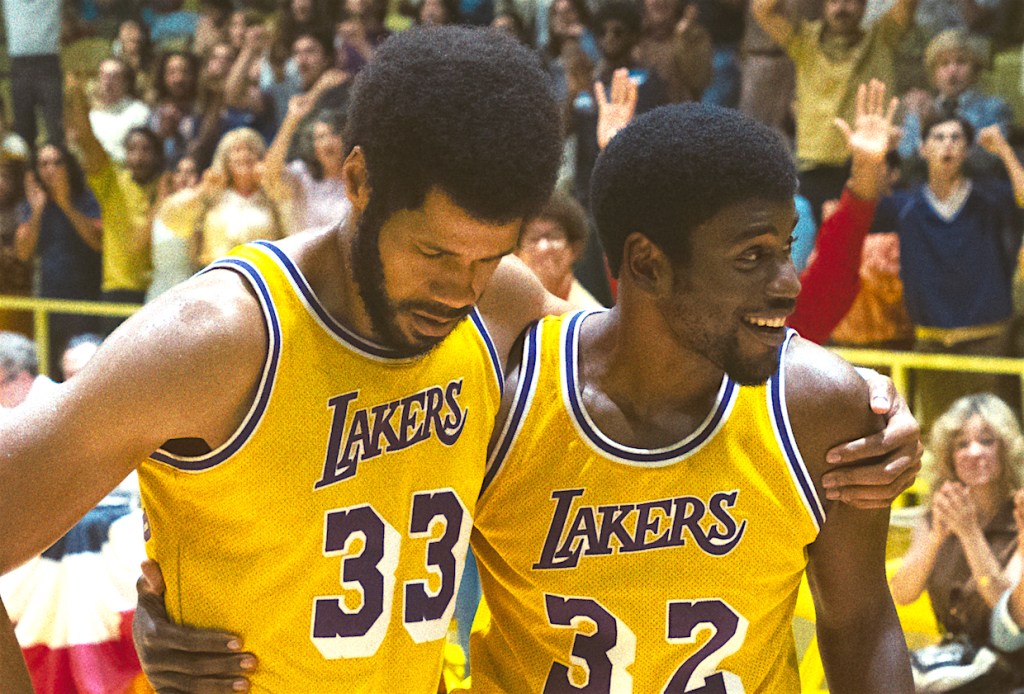 Every sports dynasty starts with one championship, but Winning Time‘s LA Lakers will have to win one without their star player.

Sunday’s season finale finds the Lakers tied 2 games to 2 with Dr. J’s Philadelphia 76ers in the NBA Finals (sorry, the “World Championships”), with Kareem dominating the Sixers in Game 5… until he jumps up for a skyhook and we hear his ankle crunch as he lands. He’s risking serious injury if he keeps playing, but he tells the team doctor to tape up his ankle and gets back on the court, leading the Lakers to a win. They just need one more win to take home the championship – and Kareem needs help getting back to the locker room.

Jerry is still reeling from his mom’s death, and though playoff revenues have brought in enough cash to pay off his creditors, he needs to name a treasurer to replace his mother. He asks Jeannie for help choosing in choosing which of her two brothers should take the job. Magic is fuming because Larry Bird won Rookie of the Year over him, and a drugged-out Spencer Haywood thinks the Lakers will call him to fill in for Kareem – but when they don’t, he tells his junkie buddies that “the hit is on. ” Jack slips Paul a game plan for winning without Kareem, and Kareem confides in Magic that he’ll be out for the rest of the series. So Magic confidently declares on the team plane they’re going to win Game 6 in Philadelphia… with him replacing Kareem at center.

At Game 6, Jerry brings his two goofy sons to watch with him, and Kareem watches from home, nursing his ankle. Magic gets the Lakers off to an early lead – the NBA was so sure they’d lose, they didn’t even bring the championship trophy to the arena – while Jeannie Sulks when she sees her dad and brothers at the game on TV. Claire finds her on the empty Forum court, and Jeannie tells her she doesn’t want to be like her grandma; she wants to be like Claire. “You never will,” Claire corrects her. “You’re gonna be like him, ”Meaning her dad Jerry. (Ooh, foreshadowing!)

The Sixers tie up the game at halftime, and Magic wants to know how many votes he lost the Rookie of the Year award to Larry Bird by, but Pat Riley throws away the results. Paul gives the team a rousing speech from Shakespeare’s Henry V., and the Lakers come out strong, but the lead slips away as Magic wears down from playing center. Pat fires him up, though, by revealing he lost the Rookie of the Year vote 63-3, and Michael Cooper sinks two key free throws after taking a hard foul. A Magic slam dunk puts the Lakers up for good, and soon, they’re celebrating an improbable victory, with Dr. J congratulating Magic on his first title. Jerry is sad his mom didn’t live to see this, but he breaks into a smile, just like he promised her he would.

The team pops Champagne in the locker room, and though Kareem won the MVP vote, since he’s not there, they decide to give the award to Magic. (“The man of the moment is you,” future commissioner David Stern tells the rookie.) Jerry West doesn’t feel like he deserves to celebrate the victory – but he wants to join the front office so he can celebrate the next one. Jerry accepts the championship trophy and announces: “Now I guess we do it all over again.” Kareem goes to congratulate Spencer and pulls him out of a spiral of self-pity, convincing him that his life is still worth living. The Lakers go home to LA to enjoy their win with their hometown fans, and Jerry decides his new treasurer will be… Claire. He reminds us of the story he told about the swan looking serene while paddling like crazy underneath the water. “Watch me paddle, motherf-kers,” he says before he hoists the championship trophy with his team.

How’d you like Winning Time‘s rookie season, and will you tune in to see more chapters in the Lakers’ dynasty? (It’s already been renewed for Season 2.) Give the finale, and the season, a grade in our polls, and hit the comments to share your thoughts.