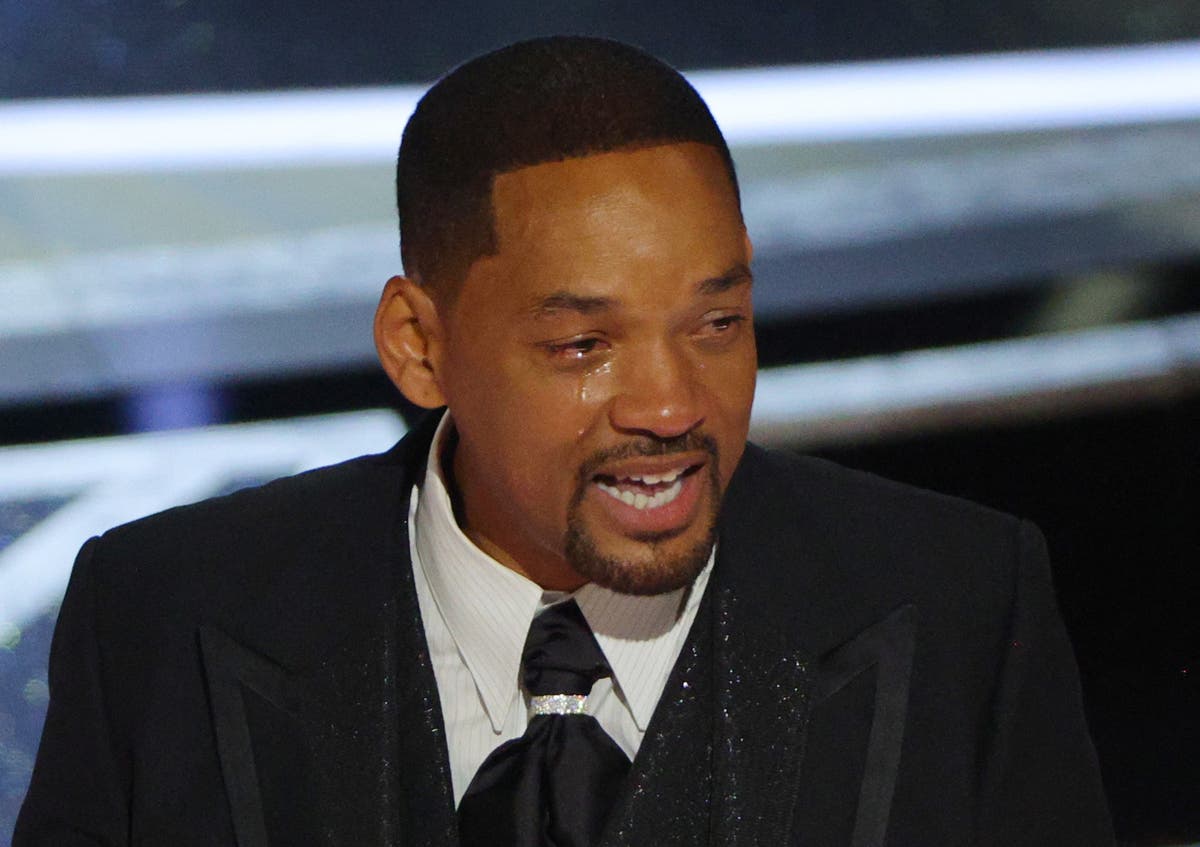 Will Smith punches Chris Rock at the Oscars

This year’s Oscars featured shocks, sighs and surprises – but all anyone will care about is a slap. The Academy Awards took place on Sunday night, with films including The Power of the Dog, West Side Story, Licorice Pizza and Coda battling it out in the big categories.

The biggest story of the night had almost nothing to do with the awards: a shocking altercation between Will Smith and Chris Rock sparked by a joke about Smith’s wife Jada. Smith walked up onto the stage and appeared to smack Rock in the face, before shouting at him not to refer to his wife again.

It undoubtedly overshadowed the night as a whole, and notably – about half an hour later – Smith’s win of the Best Actor Oscar for King Richard. Through tears, Smith called himself “a vessel of love” and apologized to the Academy. The LAPD confirmed that Rock is not pressing charges. The Academy said it “does not condone violence of any form” and launched a “formal review” into what happened. Hours later, Smith apologized to Rock and said he was “embarrassed”.

Check out the full list of tonight’s winners here and revisit all of the night’s awards, jokes and developments in our live blog below …

It was the unbelievable Oscar twist that no-one saw coming … unless you’re a Twitter user @_ja_s_on_ that is.

A tweet originally shared in 2016 went viral in the wake of last night’s events, for seemingly “predicting” the incident with Chris Rock.

The twitter user re-shared the tweet, which made speculative reference to Smith hitting Rock in the face, in the wake of last night’s events, alongside the caption: “Well…”

His reaction has since gone viral on the social media site, being “liked” over half a million times.

Richard Williams responds to Will Smith’s Oscars slap: ‘We don’t condone hitting anyone’

The real-life tennis coach portrayed by Will Smith in his latest Oscar-winning performance has distanced himself from the film star’s on-stage skirmish with Chris Rock at the awards ceremony.

Richard Williams, the father and coach of tennis titans Venus and Serena Williams, was the subject of last year’s biopic King Richard, for which Smith won the Oscar award for best male actor.

“Art imitates life. I look like the crazy father – just like they said about Richard Williams, “said Smith. “But love will make you do crazy things.”

‘Embarrassed’ Will Smith apologizes to Chris Rock over Oscars slap: ‘I was out of line and I was wrong’

Will Smith has apologized for slapping Chris Rock at the Oscars on Sunday after the comedian made a joke about his wife, Jada Pinkett Smith.

“I was out of line and I was wrong,” read a statement on Monday from the actor addressed to Rock, the Motion Picture Academy, and others including his fellow cast and crew on King Richard.

Josh Marcus has the story:

While the Best Actor win itself was understandably overshadowed by other events, many Oscar viewers may be curious about the film that gave Smith his win, King Richard.

The film is available to stream on Virgin TV Go in the UK, and on HBO Max in the US.

In it, Smith plays Richard Williams, the father of aspiring tennis champions Venus and Serena Williams – both of whom were in attendance at the Oscars yesterday.

Read Clarisse Loughrey’s four-star review of the film below …

It may have hurt at the time, but Smith’s slap may have inadvertently signed some good news for presenter Chris Rock.

“We sold more tickets to see Chris Rock overnight than we did in the past month combined,” the company revealed.

British fans of the comedian may be happy to learn that Rock is set to perform a number of UK dates in May as part of the tour.

With all the talk on Will Smith’s headline-grabbing altercation, the actual winners from last night’s Oscars have rather been swept under the rug.

But the Oscars ceremony saw a number of historic wins in several categories, including Ariana DeBose, who became the first openly queer woman of color to win an award for acting, after picking up Best Supporting Actress for her role in West Side Story.

Troy Kotsur also became the first deaf male actor to win an Oscar, after he was recognized for his supporting turn in the eventual Best Picture winner. Coda.

The Academy of Motion Picture Arts and Sciences has announced it is opening an investigation into Will Smith’s conduct during last night’s ceremony.

In a fresh statement issued by the awards body, it “condemned” Smith’s actions, and said an investigation was being launched into prospective sanctions.

“The Academy condemns the actions of Mr Smith at last night’s show,” the organization said.

“We have officially started a formal review around the incident and will explore further action and consequences in accordance with our Bylaws, Standards of Conduct and California law.”

What form the “consequences” shall take to remain seen.

Piers Morgan has given his two cents on the whole Smith incident (surprise, surprise), and detailed an encounter he allegedly had with the actor while interviewing Jada Pinkett Smith back in 2011.

“My first encounter with him was unnerving,” wrote the former Good Morning Britain host.

“Before we started, he warned me: ‘Don’t upset my wife, Mr Morgan, you wouldn’t like me when I’m angry,'” Morgan claimed.

The comments came as part of a column in which he came to the defense of Smith, describing in detail his interaction with the actor and praising Smith’s relationship with his wife.

Read the full story below …

Whoopi Goldberg has weighed in on Smith’s altercation on the US talk show The Viewshutting down speculation that the actor could have his Best Actor win revoked.

Goldberg, who is a serving governor for the Academy’s Actors branch, said: “I think it was a lot of stuff probably built up.

“I think he was overreacted; I think he had one of those moments where it was like [God damn] it, just stop. I get it, not everybody acts the way we would like them to act under pressure. And he snapped. “

After her The View co-host Sunny Hostin wondered aloud whether Smith’s trophy could be taken away, the Sister Act star said: “We’re not going to take that Oscar from him.”

Read the full story below …

Writer Joyce Carol Oates has weighed in on the Will Smith drama at length in a series of tweets.

The Black Water novelist wrote: “Will Smith behaving impulsively when his wife was insulted is very Hollywood-movie of a bygone era when such incidents would be cheered as valiant & chivalrous.

“Inappropriate behavior but met with surpassing aplomb & generosity by Chris Rock. Impressive professionalism & a concern for the Oscars to be yet awarded. in a way, a model of behavior in confrontation with sudden, unscripted violence. Chris Rock’s magnanimity will prevail. “

“Ricky Gervais must be shaking his head in wonderment of how he’d escaped a whipping or two in the past,” she joked.