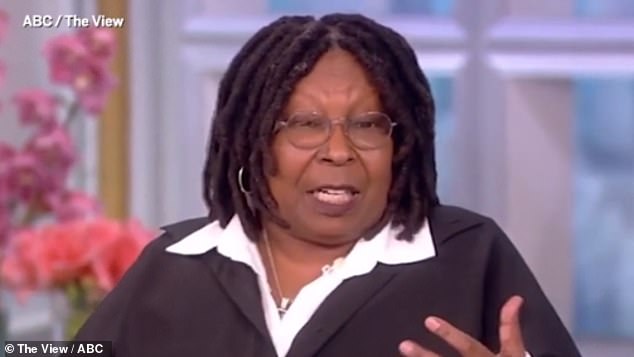 Whoopi Goldberg has joined the chorus of people calling on the royal family to apologize for their colonial past.

The 66-year-old Sister Act actress, who is based in New York City, was discussing the Duke and Duchess of Cambridge’s tour of the Caribbean for ABC’s popular talk show The View.

Whoopi, who has been vocal about royal issues in the past, said that the modern royal family needs to apologize for its imperialist past and the British empire’s links to slavery, saying the crown ‘ran ram shod’ over India for years and needs to take responsibility for its colonial past.

Her comments come after Prince William, 39, delivered a heartfelt speech where he described Britain’s historic role in the slave trade as ‘abhorrent’ and a ‘stain on our history’ in a keynote speech alongside his wife at a state dinner on Wednesday night in Jamaica.

New York City-based actress Whoopi Goldberg, 66, has joined the chorus of people calling on the royal family to apologize for its colonial past. 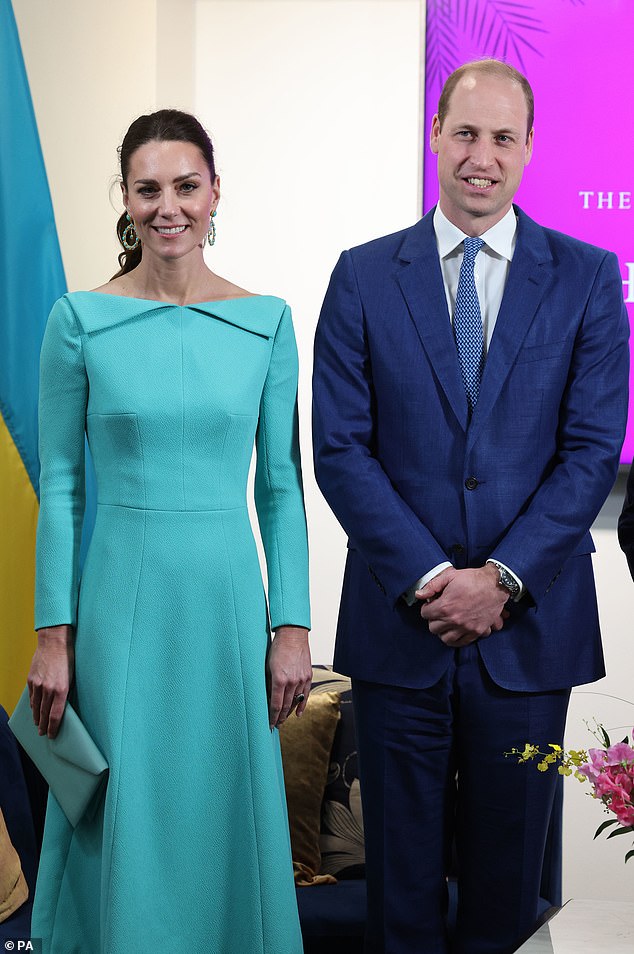 Whoopi, who has been vocal about royal issues in the past, said that the modern royal family needs to apologize for its imperialist past and for slavery, saying the crown ‘ran roughshod’ over India for years and needs to take responsibility for its colonial past (pictured in the Bahamas on Thursday)

An animated Whoopi said: ‘Let us not forget when we talk about what needs to happen, all the folks that need to apologize.’

She noted that Prince Charles acknowledged Britain’s imperialist past when he traveled to Barbados in November.

Charles traveled to the country to attend a ceremony marking the end of the royal rule over the Caribbean island.

‘Listen, this is not new. I suspect Charles when he was in Barbados, had some idea because he went on and apologized. Yes, he was releasing the hold that Britain has, ‘she added. 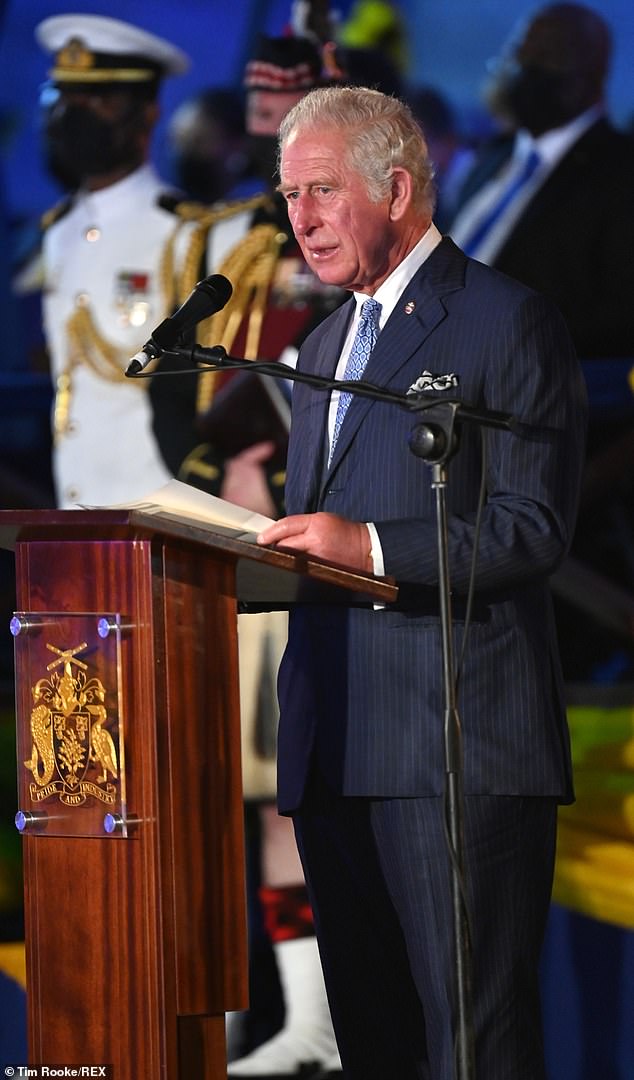 While calling for an apology, the Ghost actress noted that the royal family has shown signs it is catching up with the times.

‘So perhaps someone is listening, and it’s the new group of folks. I don’t know if it’s Charles, but one of them, ‘she said.

Her comments come after Prince William spoke of the ‘appalling atrocity’ of slavery in Jamaica at a state dinner on Wednesday, and expressed his ‘profound sorrow’ that it had ever happened.

His speech came during a tricky tour for the royals, where the Cambridges were greeted like rock stars by the public but politicians, including prime minister Andrew Holness, used meetings to make clear in public they will push for the island to be a republic with a referendum this year. 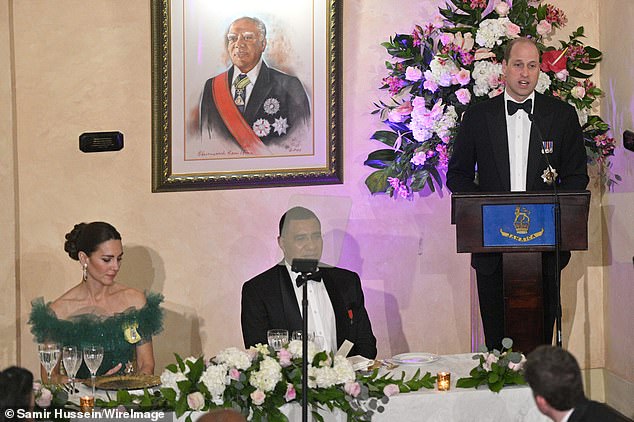 The Duke of Cambridge, pictured with the Prime Minister of Jamaica Andrew Holness and his wife the Duchess of Cambridge, has faced the issue of Britain’s historic role in the slave trade head on, describing it as’ abhorrent ‘and a’ stain on our history. ‘in a keynote speech alongside his wife Kate at a state dinner hosted by the Governor General of Jamaica at King’s House 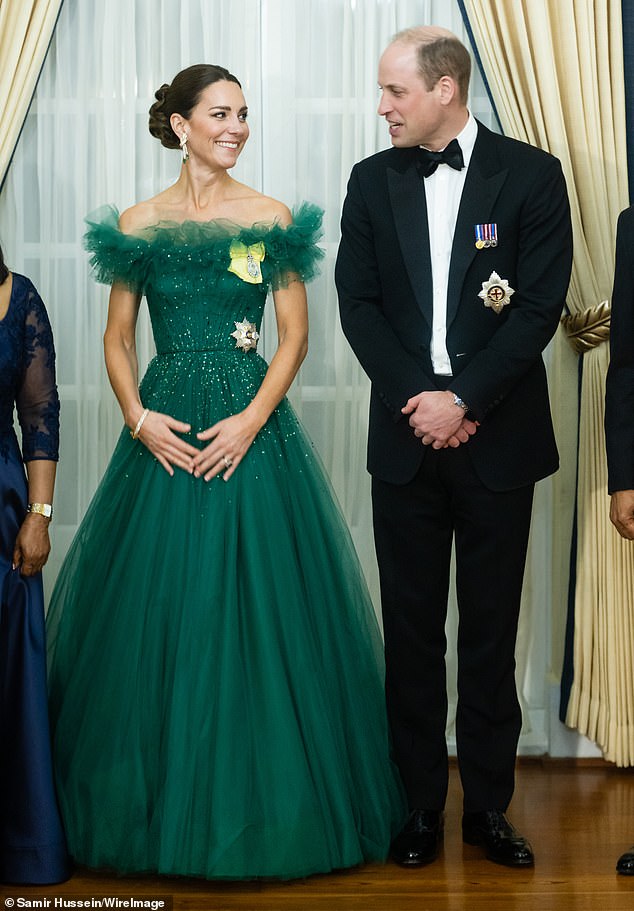 There was also a protest outside the British High Commission by republicans also demanding slavery reparations from Britain and the royals.

In a landmark speech William also referred to his father’s previous condemnation of slavery – but stopped short of apologizing for the Royal Family’s part in the trade.

He said: ‘I strongly agree with my father, The Prince of Wales, who said in Barbados last year that the appalling atrocity of slavery forever stains our history. I want to express my profound sorrow. Slavery was abhorrent. And it should never have happened. ‘

He continued: ‘While the pain runs deep, Jamaica continues to forge its future with determination, courage and fortitude.

‘The strength and shared sense of purpose of the Jamaican people, represented in your flag and motto, celebrate an invincible spirit.

It is the same spirit that spurred on the Windrush generation, who came to the United Kingdom to help rebuild after the Second World War.

‘We are forever grateful for the immense contribution that this generation and their descendants have made to British life, which continues to enrich and improve our society. 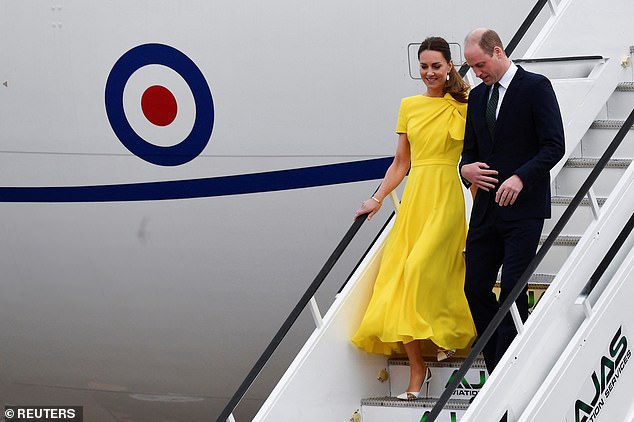 Prince William and Kate, Duchess of Cambridge, leave the RAF Voyager aircraft at Norman Manley International Airport as they continue their tour of the Caribbean.

‘I’m delighted that a national monument acknowledging and celebrating the Windrush generation by Jamaican artist, Basil Watson, will be unveiled later this year in Waterloo Station in London.’

It comes as Jamaica’s Prime Minister warns the Duke and Duchess of Cambridge that his nation is ‘moving on’ and intends to ditch the monarchy during a tense meeting this afternoon following anti-monarchy protests on the Caribbean island as its politicians push for a 2022 independence vote and slave trade reparations.

During the emotional speech, William also said he and his wife were ‘very pleased’ to be on our first official visit to Jamaica, adding: ‘All my family have enjoyed their visits here so much. They have waxed lyrical about the warmth and sense of fun of the Jamaican people and the beauty of this island.

Already in our short time here, Catherine and I are delighted to have felt what Bob Marley described so many years ago – the spirit of ‘One love’ that Jamaica has given to the world and which makes this country so special. 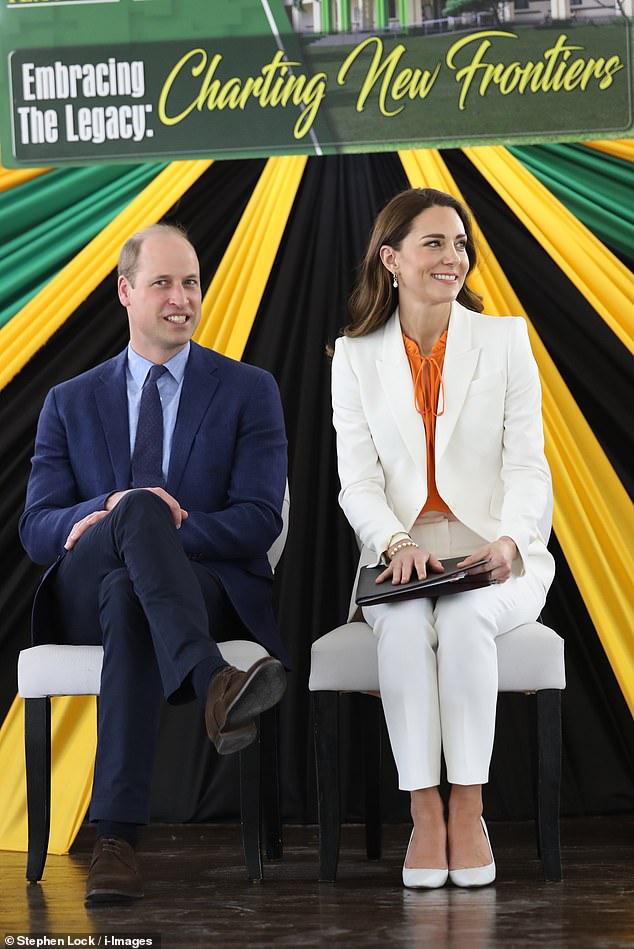 There have been several calls for the royal family to apologize for its colonial past during the Duke and Duchess of Cambridge’s royal tour of the Caribbean. Pictured in Kingston on Monday 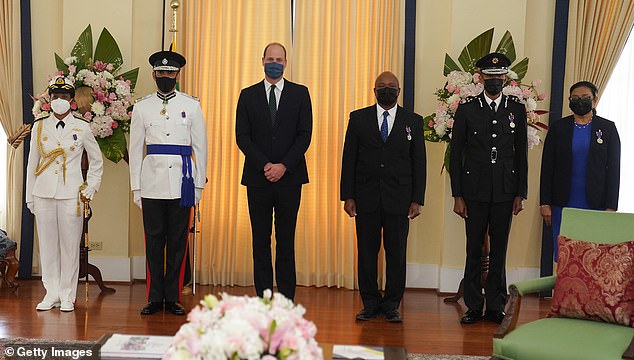 ‘I’m particularly pleased tonight to convey the very best wishes from my grandmother, The Queen of Jamaica, on the occasion of her Platinum Jubilee.

It is no secret that The Queen has a deep affection for Jamaica, forged on her very first visit here with my grandfather, The Duke of Edinburgh, in 1953.

‘And likewise I have been touched to hear today from Jamaicans, young and old, about their affection for The Queen.

‘Her dedication, commitment, and sense of duty to the Commonwealth family is deeply admired. She may be my actual grandmother, but everyone counts her as their grandmother too. And I’m ok with that!

And of course, as The Queen marks seventy years on the throne, this is also a very special year for Jamaica, as you celebrate your sixtieth anniversary of independence. Now that’s double the excuse for a party! ‘

Prince William was given a polite round of applause following his seven minute address to a complete and respectful silence ballroom at the Governor General’s home.