What Happened on Day 108 of the War in Ukraine 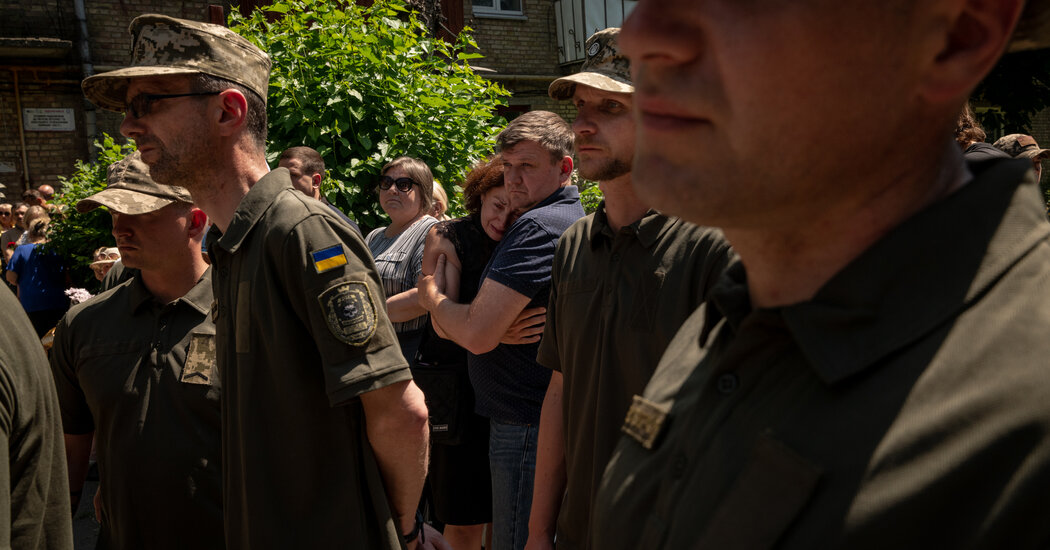 Yevgeny Shumilkin is going back to work on Sunday. To prepare, he pulled the familiar “M” off what had been his McDonald’s shirt and covered the “M” on his McDonald’s jacket with a Russian flag patch.

“It will be the same buns,” promised Mr. Shumilkin, who maintains the equipment at a restaurant in Moscow. “Just under a different name.”

McDonald’s restaurants are reopening in Russia this weekend, but without the Golden Arches. After the American fast-food giant pulled out this spring to protest President Vladimir V. Putin’s invasion of Ukraine, a Siberian oil mogul bought its 840 Russian stores. Because almost all of the ingredients came from inside the country, he said, the restaurants could keep on serving much of the same food.

The gambit might just work – underscoring the Russian economy’s surprising resilience in the face of one of the most intense barrages of sanctions ever meted out by the West. Three and a half months into the war, it has become clear that sanctions – and the torrent of Western companies voluntarily leaving Russia – have failed to completely dismantle the economy or set off a popular backlash against Mr. Putin.

Russia spent much of Mr. Putin’s 22 years in power integrating into the world economy. Unraveling business ties so large and so interwoven, it turns out, is not easy.

To be sure, the effects of the sanctions will be deep and broad, with the consequences only beginning to play out. Living standards in Russia are already declining, economists and businesspeople say, and the situation is likely to get worse as stocks of imports run low and more companies announce layoffs.

Some do-it-yourself efforts by Russia may fall short of Western standards. When the first post-sanctions model of the Lada Granta – a Russian sedan co-produced by Renault before the French automaker pulled out this spring – rolled off an assembly line at a plant near the Volga on Wednesday, it lacked airbags, modern pollution controls or anti-lock brakes.

But the economic decline is not as precipitous as some experts had expected it would be after the Feb. 24 invasion. Inflation is still high, around 17 percent on an annual basis, but it has come down from a 20-year peak in April. A closely watched measure of factory activity, the S&P Global Purchasing Managers’ Index, showed that Russian manufacturing expanded in May for the first time since the war began.

Behind the positive news is a combination of factors playing to Mr. Putin’s advantage. Chief among them: high energy prices, which are allowing the Kremlin to keep funding the war while raising pensions and wages to placate ordinary Russians. The country’s oil revenues are up 50 percent this year.

In addition, deft work by the Central Bank prevented a panic in the financial markets after the invasion and helped the ruble recover from its initial crash. Store shelves, for the most part, remain stocked, thanks to ample inventories and alternative import routes being established through countries like Turkey and Kazakhstan – and the fact that Russian consumers are buying less.

Even the new Lada Granta is less of a clunker than observers predicted: Despite the shortages of foreign components, it will still come with power steering and power windows.

“Everything is not as bad as expected,” a Russian car website proclaimed.

The Russian economy’s survival is strengthening. Putin’s hand by bolstering his narrative that Russia will stand tall in the face of the West’s determination to destroy it. He met with young entrepreneurs on Thursday in a town-hall-style event, his latest effort to show that even as he waged war, he was keen to keep the economy functioning and foreign trade moving. Even if the West will not do business with Russia, he insisted, the rest of the world will.

“We are not going to have a closed economy,” he said. Putin told a woman asking about the effects of sanctions. “If someone tries to limit us in something, they are limiting themselves.”

For the rich, luxury goods and iPhones are still widely available, but more expensive, ferried into Russia from the Middle East and Central Asia. The poor have been affected by rising prices, but they will benefit from a 10 percent increase in pensions and the minimum wage that Mr. Putin announced last month.

Those most affected by the economic upheaval are in the urban middle class. Foreign goods and services are now harder to come by, Western employers are pulling out and travel abroad is becoming difficult and prohibitively expensive.

But Natalya V. Zubarevich, an expert in social and political geography at Moscow State University, notes that many middle-class Russians have no choice but to adapt to a lower standard of living: at least half of the Russian middle class, she estimates, works for the state or for state-owned enterprises.

“Sanctions are not going to stop the war,” she said. Zubarevich said in a phone interview. “The Russian public will bear it and adapt because it understands that it has no way to influence the state.”

Chris Weafer, a macroeconomic consultant who has long focused on Russia, published a note to his clients last week, saying that “some of our previous assumptions were wrong.” Inflation, and the economy’s contraction, turned out to be less severe than expected, the note said. His firm, Macro-Advisory Eurasia Strategic Consulting, revised its forecast to show a smaller decline in gross domestic product this year – 5.8 percent rather than 7 percent – while also forecasting a recession lasting into next year.

In a phone interview, Mr. Weafer described Russia’s economic future as “more dull, more debilitating,” with lower incomes, but with basic goods and services still available. A major juice company, for instance, warned customers that its boxes would soon all be white because of a shortage of imported ink.

“The economy is now moving into an almost stagnant phase where it can avoid a collapse,” he said. “It’s a more basic level of economic existence, which Russia can continue for quite some time.”

On Friday, with inflation stabilizing, Russia’s Central Bank reduced its key interest rate to 9.5 percent – the level before the invasion. On Feb. 28, the bank had raised it to 20 percent to try to head off a financial crisis. The ruble, after plummeting in value in the days after the invasion, is now trading at four-year highs.

One reason for the ruble’s unexpected strength is that global energy demand surged coming out of the pandemic. In June alone, the Russian government is expecting a windfall of more than $ 6 billion because of higher-than-expected energy prices, the Finance Ministry said last week.

At the same time, Russian consumers have been spending less – further propping up the ruble and giving Russian companies time to set up new import routes.

For example, it remains unclear how Russian companies will be able to obtain microchips used in a wide variety of goods. At Mr. Putin’s meeting with entrepreneurs, one developer said he was “very concerned about our microelectronics.”

The ties binding Russia’s economy to the West, now coming undone, go back decades – sometimes more than a century. Aeroflot, the national carrier, acquired scores of new Boeing and Airbus jets and styled itself as a convenient transit airline for people traveling between Europe and Asia. In the Ural Mountains, a factory worked with Siemens, the German manufacturing giant, to produce modern trains to replace rusting Soviet stock.

Banned from using European airspace, Aeroflot is now focusing on domestic routes and working to switch to Russian planes – a process that will take years. Siemens, which built telegraph lines across the Russian Empire in the 1850s and helped bring the country into the industrial era, announced last month it was pulling out of Russia.

“Sanctions suffocate the economy, which does not happen all at once,” said Ivan Fedyakov, who runs Infoline, a Russian market consultancy that advises companies on how to survive under the current restrictions. “We have only felt 10 to 15 percent of their effect.”

But when it comes to food, at least, Russia is more prepared. When McDonald’s opened in the Soviet Union in 1990, the Americans had to bring in everything. Soviet potatoes were too small to make fries, so they had to acquire their own russet potato seeds; Soviet apples did not work for the pie, so the company imported them from Bulgaria.

But by the time McDonald’s pulled out this year, its Russian stores were getting almost all of their ingredients from Russian suppliers. So when McDonald’s, which employed 62,000 workers in Russia, announced in March that it was suspending operations because it could not “ignore the needless human suffering unfolding in Ukraine,” one of its Siberian franchisees, Aleksandr Govor, was able to keep his 25 restaurants. open. Last month, he bought the entire Russian business of McDonald’s for an undisclosed sum.

On Sunday – Russia Day, a patriotic holiday – he will reopen 15 stores, including the former flagship McDonald’s on Moscow’s Pushkin Square, the place where, in 1990, thousands of Soviets famously lined up for a taste of the West. The chain will operate under a still-to-be-disclosed new brand, though the new logo has been unveiled, said to represent a hamburger and French fries.

The hash browns will go by a Russian name, according to a menu leaked to a Russian tabloid. And, since the secret sauce is proprietary, there will be no Big Mac on offer.

Ernesto Castro
Google Agrees to Pay Out $118 Million To Former Employees In Gender Discrimination And Pay Equity Suit
So You Think You Can Dance: Season 17; Leah Remini to Replace Matthew Morrison on FOX Series