‘We are awash in guns’: Police superintendent addresses mass shooting on Near North Side and promises more police officers at ‘longstanding’ problem corner 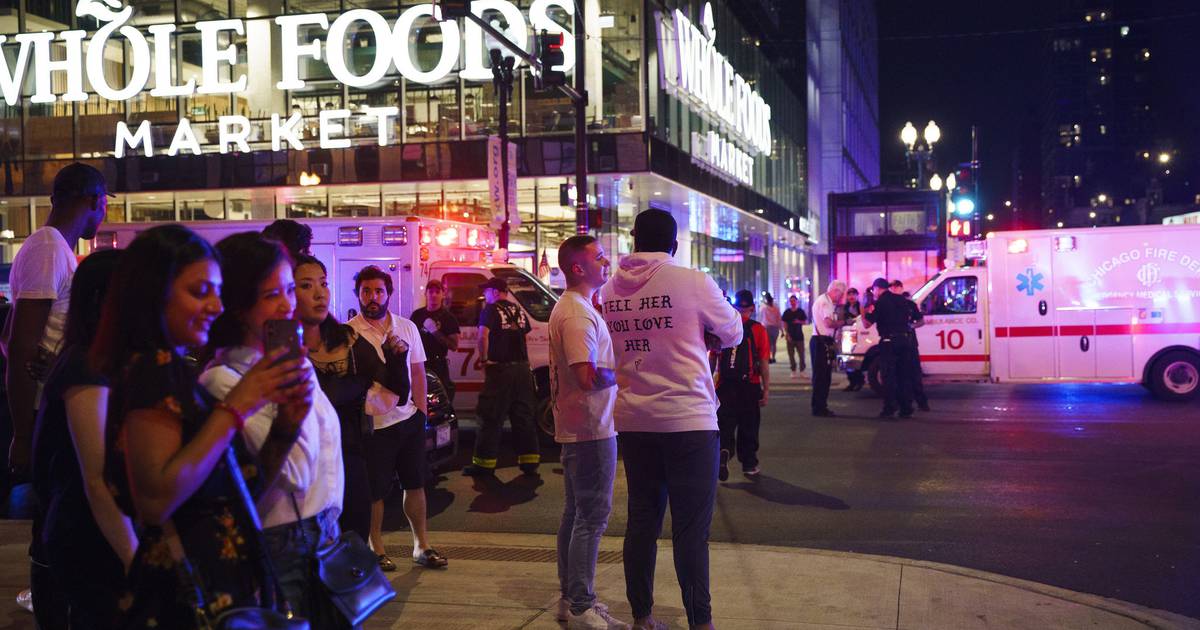 A mass shooting that started with a brawl among two groups of young people left two killed and seven wounded late Thursday, blocks from the Magnificent Mile, according to Chicago police, who say they have one person in custody.

An additional victim had suffered burns, possibly from being injured on the nearby CTA Red Line subway, according to a witness and a Chicago Fire Dept. spokesman.

The shooting happened about 10:40 pm in the 800 block of North State Street outside the Chicago Avenue subway station and a McDonald’s at 10 E. Chicago Ave. The gunfire during a fight outside the fast food outlet sent some fleeing into the Red Line station and saw one person injured on the tracks there.

The McDonald’s and nearby blocks have been a hot spot off and on over the past few years. And the shooting comes with increased attention already being paid to violence in the larger downtown area as summer approaches.

The city had been shocked earlier in the week by the fatal shooting of a teenager near The Bean in Millennium Park. It was unclear what role new rules that went into effect Thursday closing Millennium Park to unaccompanied minors might have played in moving groups of young people to other parts of downtown, although police leaders downplayed that connection.

The 18th District, where McDonald’s is located, has seen an increase from 5 to 15 shooting victims this year through May 18, according to official police data. That total is expected to jump after Thursday night’s shooting.

As of early Friday, police have arrested one person and recovered a gun from the scene of the attack. The dead have not been identified yet and police released no further details about the victims.

Brown said the disturbance began at about 10:40 pm with two groups, and that roving police patrols observed the situation. A local pod camera captured the shooting.

Brown called the situation a “personal conflict,” and said after the shooting, a group that included the shooter fled into the nearby CTA Red Line station. Officers chased and captured the person believed to be the gunman in the station, he said, meanwhile a female who was part of the group had stepped or fallen on the third rail in the station and was injured.

Police are working with prosecutors to charge the possible shooter, Brown said.

The superintendent said police are “confident our officers captured the shooter and recovered the weapon used.”

Brown acknowledged the corner has historically been a problem area, but blamed the gun fire on the easy availability of guns.

“This is a gun crime crisis in our city and our country,” Brown said. Because someone in the crowd who was involved in the argument had a weapon, gunfire erupted.

“We are awash in guns,” Brown said.

Brown also rejected the idea the Millennium Park limits on youths played into the shooting or the moving of the gathering place for younger people downtown. He noted the corner has been a “longstanding” problem spot.

“It’s not based off anything related to Millennium Park,” Brown said, including the use of police resources there compared to other places in the city center.

In a statement, Mayor Lori Lightfoot decried the “outrageous act of violence” and promised to put more police officers in the area, including a fixed post at the intersection and another at the Red Line station.

“Area residents, commuters, and others simply must have the peace of mind that this highly trafficked area is safe, and it is time for more specific, concrete steps to be taken to address this area once and for all,” Lightfoot said.

The police department “is hard at work to make sure those responsible for last night’s incident are held accountable, for the safety and well-being of us all,” Lightfoot said.

Brown said police had in face instantly created a fixed post in the area and at the CTA station in question, in addition to roving units.

At an unrelated news conference later Friday morning, Lightfoot lamented the overnight shooting as a tragedy and said it would feel like “deja vu all over again” once the details come out.

“Young people, coming together, getting into a fight, and the difference-maker is someone had a gun and that someone used it,” Lightfoot said.

One victim was in “grave” condition and the other gunshot victims were all in serious to critical condition, Hernandez said.

They were taken to Illinois Masonic, Stroger, and Northwestern Memorial hospitals, Hernandez said.

A Red Line train traveling through the area was stopped between stations while authorities searched for a weapon in the subway’s rails, Hernandez said, adding the department evacuated the CTA passengers at about 11:30 pm.

Shortly before then, responders were seen removing people – at least two who appeared to be badly injured – from an area between the McDonald’s and the subway entrance on the northeast corner of State Street and Chicago Avenue.

Amid the chaos of the shooting’s aftermath, a woman yelled at an officer standing near the station entrance, “What hospital? My brother got shot! ”

As paramedics and officers worked the scene a fight erupted between two people across the street. Shortly after 11:15 pm a group crossed a line of police tape and argued with officers before they were pushed back.

Two women were among those taken away on stretchers. One was sitting up and silent as paramedics lifted her into an ambulance.

Deonna Jackson, 18, had come downtown to hang out with her friends.

“I was getting off the train and I spotted a group of teens fighting,” Jackson said. “The teens started rushing towards me and they’re all attacking one person – they were jumping someone.”

“I’m kind of used to that happening right here, but I just don’t involve myself.”

Jackson separated herself from the tussle and “made it to the corner.”

That’s when a girl approached her, asked what was happening and then asked Jackson for her help, explaining that she was trying to find her friend who may have been involved in the fight.

But then someone in a white car pulled up to them and she “found her people,” said Jackson, who began making her way to the 7-Eleven across the street.

“All of a sudden shots went off,” Jackson said. “I flew inside the store (7-Eleven).”

When the hail of gunfire halted, she ran outside to try and help the victims. “I was scared,” Jackson said.

“I ran towards the people who were lying on the street,” Jackson said. “They (victims) were on the sidewalk in front of the McDonald’s.”

Jackson said at least one person shot appeared to be man in his 20s while many others were likely people in their teens. Jackson recognized another victim as a possibly homeless woman about 60, who regularly asks for change at that corner.

A woman who suffered burns was possibly injured from the CTA’s third rail, according to Jackson, who said she saw the woman, partially clothed, coming out of the station, with injuries to her back.

Jackson finally made it home about 2:30 am but didn’t take the CTA, as service was still down in that area.

“My head is actually spinning right now,” Jackson said in a text message.