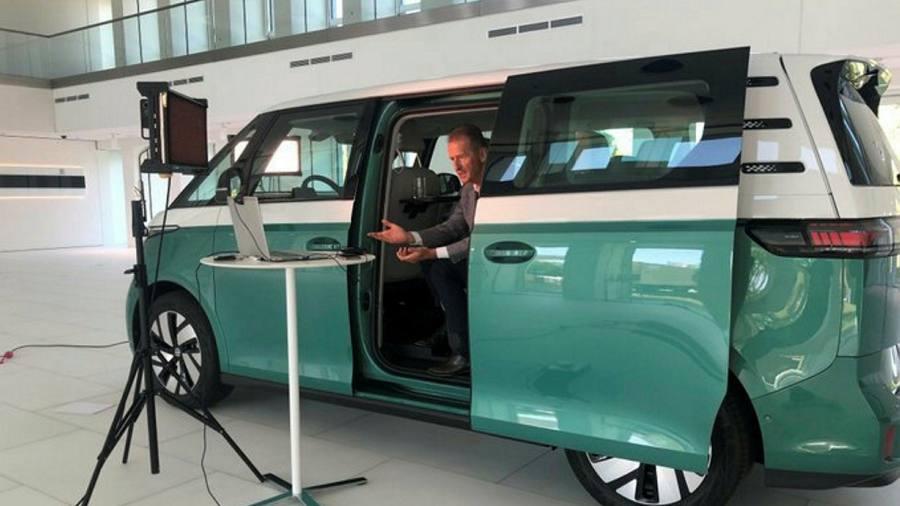 The boss of Volkswagen has called for the EU to pursue a negotiated settlement to the war in Ukraine for the sake of the continent’s economy, in an intervention that challenges the stance taken by European leaders.

“I think we should do the utmost to really stop this war and get back to negotiations and get back to trying to open up the world again,” Herbert Diess told the Financial Times’ Future of the Car summit on Monday.

He spoke as Vladimir Putin claimed Russia was forced to “strike back pre-emptively” against Ukraine, adding that the Kremlin’s troops were “fighting on their own land” in the conflict, just as Soviet forces did in the second world war.

In his speech at the annual Victory Day parade in Moscow’s Red Square, Russia’s president hinted that he would lay claim to more Ukrainian territory, including lands at present occupied by the Kremlin’s forces.

By contrast, in a speech shortly before Putin’s address, Ukraine’s president Volodymyr Zelensky accused Russia’s leadership of repeating the “horrific crimes of Hitler’s regime” by waging a war of atrocities and land grabs. “This is not a war of two armies,” he said in a video address. “This is a war of two world views, a war waged by barbarians.”

Diess’ comments on the need for a settlement come a day after Germany’s chancellor, Olaf Scholz, vowed to continue to supply Ukraine with weapons, adding that “capitulating to brute force” was not an option for Europe.

While Scholz’s stance has been publicly supported by German industry, disruptions to supply chains – exacerbated by the war in Ukraine – continue to hurt the likes of Volkswagen, the world’s second-biggest carmaker.

A shortage of wiring harnesses made in the country forced the company to cut back on production in recent weeks, and VW has sold out of electric models in US and Europe for the year.

Diess said if global trade continued to struggle, “Europe will suffer most, and Germany, but I think it will be bad for the whole world”.

Germany is currently debating whether it could endure a sudden end to Russian gas supplies. A new study by an adviser to the government found that Germany’s economy stood to lose about 12 per cent of its annual output if supplies stopped abruptly.

Volkswagen’s Diess, who had previously warned that a drawn-out war would do more damage to Germany and Europe than the Covid-19 pandemic, has sparked criticism for previous comments.

On Monday, Diess also warned that the German group would struggle to overtake Tesla as the world’s biggest maker of electric cars by the company’s target of 2025.

“I didn’t expect our main US competitor’s growth to be so fast,” he said.