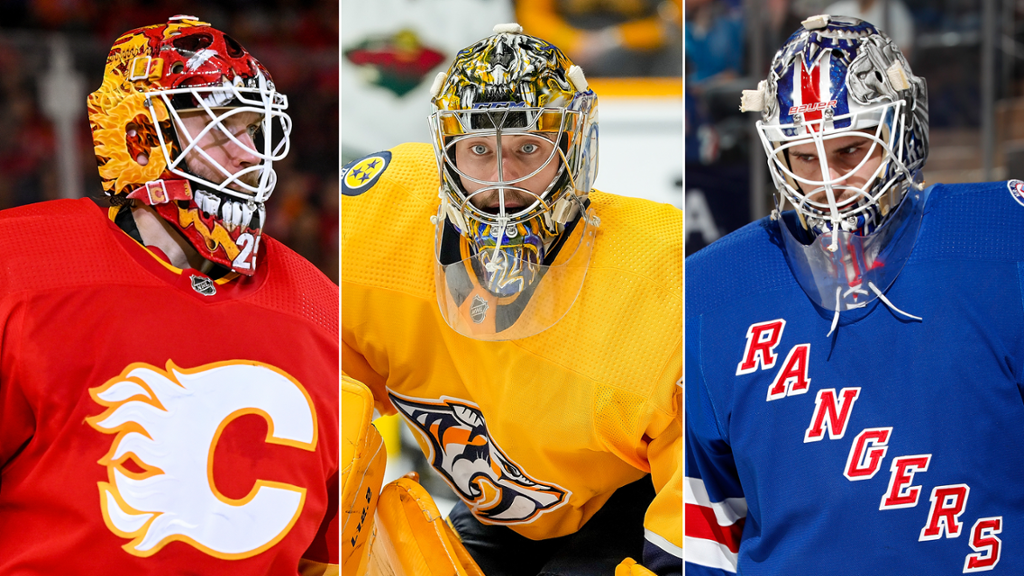 The three finalists for the Vezina Trophy are an accomplished group of goalies.

Jacob Markstrom had a career season at the age of 32 and in his second season with the Calgary Flames. He won a personal-best 37 games and led the NHL with nine shutouts.

Juuse Saros, in his first season as the unquestioned No. 1 for the Nashville Predators, opened some eyes with his consistently elite play. The 27-year-old took over the starter’s job when franchise icon and fellow Finland-born goalie Pekka Rinne retired at the end of last season.

Igor Shesterkin accelerated the rebuild for the New York Rangers by playing at a high level. In his third NHL season, the 26-year-old set career highs across the board and had a .935 save percentage, the third-highest in a single season (minimum 50 games).

But who is the goalie adjudged by the 32 NHL general managers to be the best at the position this season? We’ll find out when the winner is announced during the 2022 NHL Awards in Tampa on Tuesday (7 pm ET; ESPN, SN, TVAS), but in the interim, NHL.com asked a writer to make a compelling argument for why each finalist should win.

I know it seems ridiculous not to pick Shesterkin but hear me out. Markstrom was 37-15-9 with a .922 save percentage and a 2.22 goals-against average, which puts him right up there with the Rangers goalie, who was 36-13-4 with a .935 save percentage and 2.07 GAA. But to me, the key number is this: 63. That’s how many games Markstrom played this year, 10 more than Shesterkin. He was a workhorse on a team that won its division. He also played in the Western Conference, where he faced four of the seven highest-scoring teams in the NHL in the regular season, including Pacific Division-rival Edmonton Oilers, who were seventh in the NHL at 3.48 games. The Flames were sixth (3.55). How good was Markstrom this season? His .922 save percentage is tied for third all-time in Flames history for a single season (minimum 10 games). Shesterkin will likely win the Vezina, but Markstrom should not be an afterthought. – Bill Price, VP, Editor-in-Chief

Look, we all know Saros was not the most-celebrated goalie this season. It was Shesterkin and rightly so. He had a season for the ages, but that doesn’t mean he was the best goalie in the NHL during the regular season. I don’t know who the 32 general managers will select, but it should be Saros, who went 38-25-3 with a 2.64 goals-against average and .918 save percentage. He started more games (67) and played more minutes (3,931: 42) than any goalie in the NHL and had more wins (38) than either of the other two finalists. He did all this for a team that was not as defensively stout as the Rangers or the Flames. The Predators allowed 32.3 shots against per game, tied with the Oilers for the most among the 16 teams that made the Stanley Cup Playoffs, and tied for the 20th among all teams. The Rangers (30.8) were 11th and the Flames (29.0) were tied for fifth. Lastly, Saros played behind a below-average penalty kill (79.2 percent, 18th), resulting in 46 of the 173 goals he allowed coming when Nashville was shorthanded. Saros had a .927 even-strength save percentage, sixth among all goalies (minimum 20 games); Markstrom was seventh (.926) and Shesterkin’s was first (.934). However, the Rangers allowed 18 power-play goals when Shesterkin played, less than half than what the Predators gave up when Saros played. Saros was not the flashiest goalie this season, nor the most prolific, but there is a clear argument that he was the best. – Shawn P. Roarke, senior director of editorial

During the Rangers’ end-of-season availability Monday, Shesterkin was asked the significance of fans at Madison Square Garden regularly honoring him with “Igor, Igor” chants. “It means they know my name,” he quipped. So do the NHL’s general managers. And it says here it will be the name that should – and will – be engraved on the trophy. I’m not saying Saros and Markstrom aren’t worthy candidates or don’t have some eye-popping stats. They do. But here’s the stat that, to me, is the one that supersedes all others: the .935 save percentage of Shesterkin this season. Among goaltenders who played 50 or more games, it trailed only Tim Thomas (.938 in 2010-11) and Dominik Hasek (.937 in 1998-99). That’s not this season; that’s all time. Shesterkin put together a historical season and should be rewarded for it. You can spin doctor the cases for the other two finalists all you want but history doesn’t lie. When all is said and done, expect Shesterkin to become the third Rangers goalie to win the award since GMs began voting on it in 1981-82, along with John Vanbiesbrouck (1985-86) and Henrik Lundqvist (2011-12). Prior to 1981, Vezina was given the goalie or goalies of the team that allowed the fewest goals. – Mike Zeisberger, staff writer