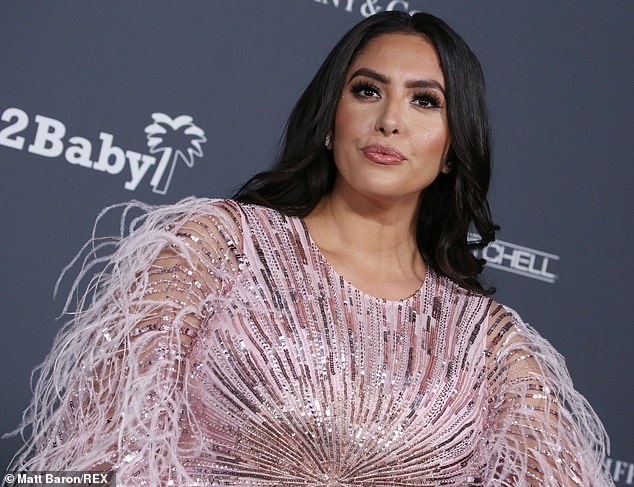 And Vanessa Bryant, the late NBA star’s widow, wants the jury to know that the same deputy, Doug Johnson, was also involved in another scandal – one in which he allegedly kneeled on an inmate’s neck.

In response, lawyers for the county have asked a judge to block Bryant from alerting the jurors, reported TMZ.

Speaking out: Vanessa Bryant wants a jury to know the sheriff who is accused of sharing crash scene photos from her husband Kobe Bryant’s death was also involved in another scandal in which he allegedly kneeled on an inmate’s neck; Vanessa pictured in 2021

The Sheriff’s Department unsuccessfully tried to keep the kneeling incident under wraps, but a video was leaked to Knock LA.

The county filed documents on Friday calling the separate situation ‘entirely unrelated’ to the Bryant case.

It’s believed that alerting the jurors could significantly affect the direction of the forthcoming case.

Now both the plaintiff and defendants are waiting for a judge to make a decision. 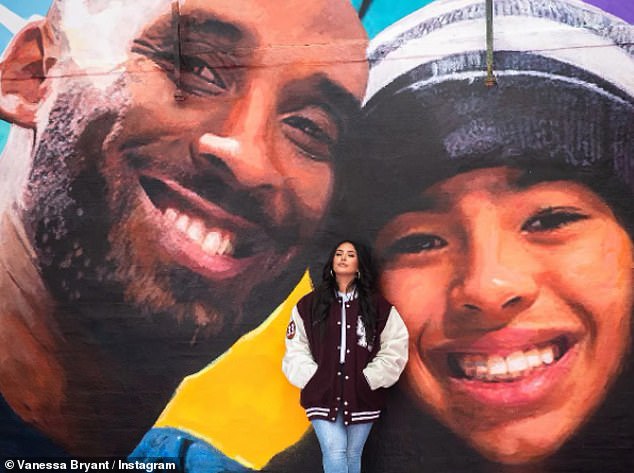 Tense: Lawyers for the county have asked a judge to block Bryant from alerting the jurors to Doug Johnson’s other missteps, reported TMZ; Vanessa poses in front of a Philadelphia mural of her late husband and daughter Gigi

The leaked video footage shows someone who appears to be Johnson escorting the inmate, a 24-year-old male, through the jail.

The prisoner, who’s locked up for a pending murder case, swings at the officer shortly thereafter.

The man presumed to be Johnson and other officers then work to detain the man before the deputy allegedly places a knee on the inmate’s neck for several minutes.

Here’s the footage of Deputy Douglas Johnson kneeling on the head of Enzo Escalante, leaked to Knock LA. AleneTchek reported on claims that Sheriff Villanueva directed a cover-up of the investigation of this use-of-force & is now the subject of a department investigation. pic.twitter.com/ELj7K2N7Yq 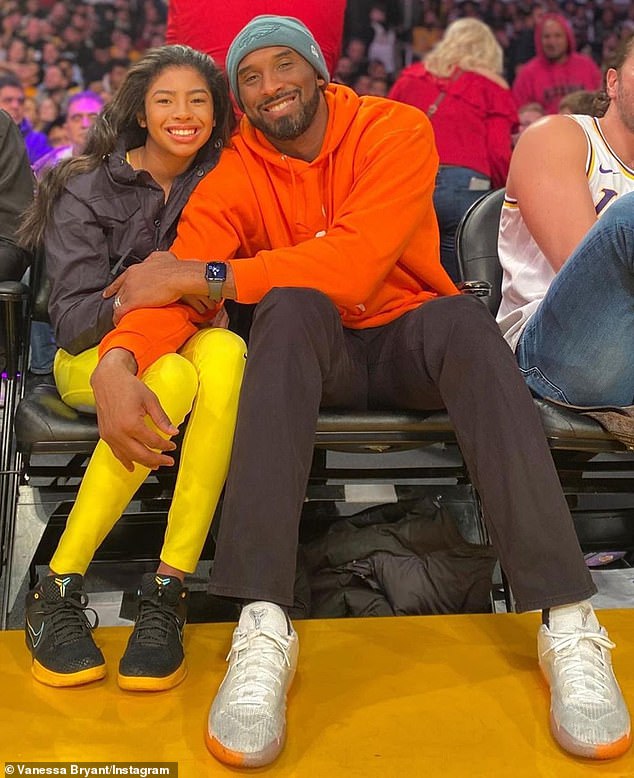 Daddy-daughter bond: Kobe and Gianna sat courtside at an NBA game shortly before their untimely deaths

Back in 2020 graphic photos showing the bodies of Kobe and his 13-year-old daughter, Gianna, just hours after they were killed in a helicopter crash, were passed around by at least 28 police officers and at least a dozen firefighters in bars and at a media awards gala.

Vanessa is seeking damages for invasion of privacy over the sharing of the graphic photos.

The photos were taken by police officers and firefighters at the site of the helicopter crash in Calabasas where Bryant, his daughter, and seven others died in January 2020.

In documents filed in January 2022, Vanessa’s attorney Luis Li wrote that pretrial evidence, ‘has shown that the close-up photos of Gianna and Kobe’s remains were passed around on at least 28 sheriff’s department devices and by at least a dozen firefighters, and shown off in bars and at an awards gala ‘. 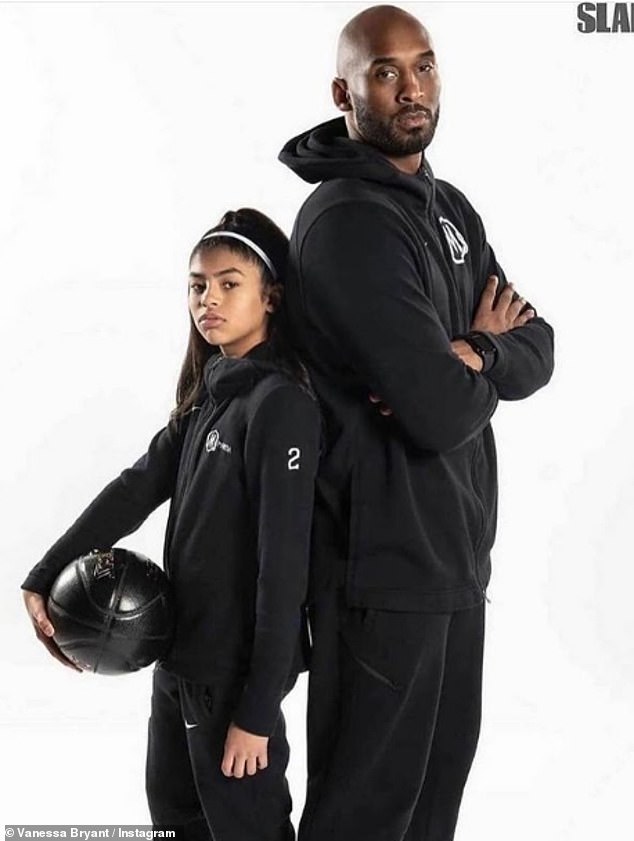 Seeking compassion: Vanessa said she begged Sheriff Alex Villanueva on the day of the crash in which they were killed on January 26, 2020 to secure the crash site and not allow anyone to take photographs after learning there were no survivors.

Li also alleged that Los Angeles County officials ‘engaged in a coverup, destroying the direct forensic evidence of their misconduct and requiring extensive circumstantial evidence to establish the full extent of that misconduct.’

Los Angeles County has previously defended itself by saying that the photos were not posted online or seen by the public aside from in a bar two days after the crash. In that incident, a bartender told a patron that an officer had just shown him the photos. That patron laid a complaint with the LA County Sheriff’s office.

In the documents filed, Vanessa’s attorney states that a private citizen attending the 2020 Golden Mike Awards – a broadcast television awards night held less than a month after the crash – witnessed LA County Fire Department Public Information Officer Tony Imbrenda talking about the photos and showing them to others. It’s not clear who he showed the photos to. 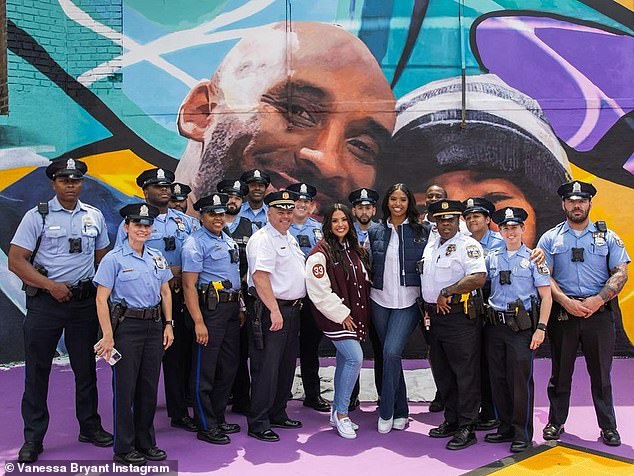 Good cops: Instagram Bryant said she was ‘deeply thankful to the Philadelphia Police Department for going out of their way to ensure we all had a streamlined event’ at a recent ceremony unveiling a mural of her husband and daughter

Vanessa previously said that the photos showing the death of her husband and daughter were ‘out there,’ caused her ‘constant fear and anxiety,’ and that she was having trouble sleeping and was depressed as a result.

She added that she has been contacted by internet creeps telling her they’ll share the gruesome photos online, although those threats have yet to come to fruition.

Vanessa also said she has seen one photo of her husband’s body, and that it sickens her to see ‘Kobe Bryant body’ pop up as a suggested search on Google when she types her late husband’s name into the search bar. Six of the couple’s family friends and the chopper pilot also died in the smash.

She was forced to detail her anxiety in a declaration filed with LA County. In documents seen by TMZ, Bryant details how she asked Sheriff Alex Villanueva on the day of the crash, January 26, 2020, to secure the crash site and not allow anyone to take photographs after learning there were no survivors.

But just a month later she learned Sheriff’s deputies and firefighters were indeed passing around photos that had been taken of Kobe and Gianna’s remains. 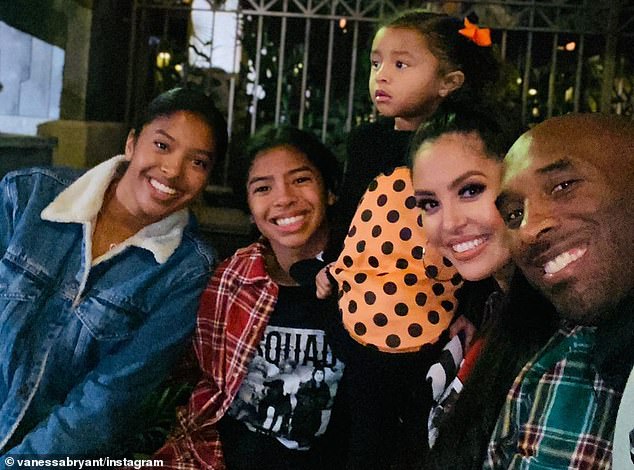 Family: The Bryant family – Natalia, Gianna, Bianka, Vanessa and Kobe smiled for a photo in 2019