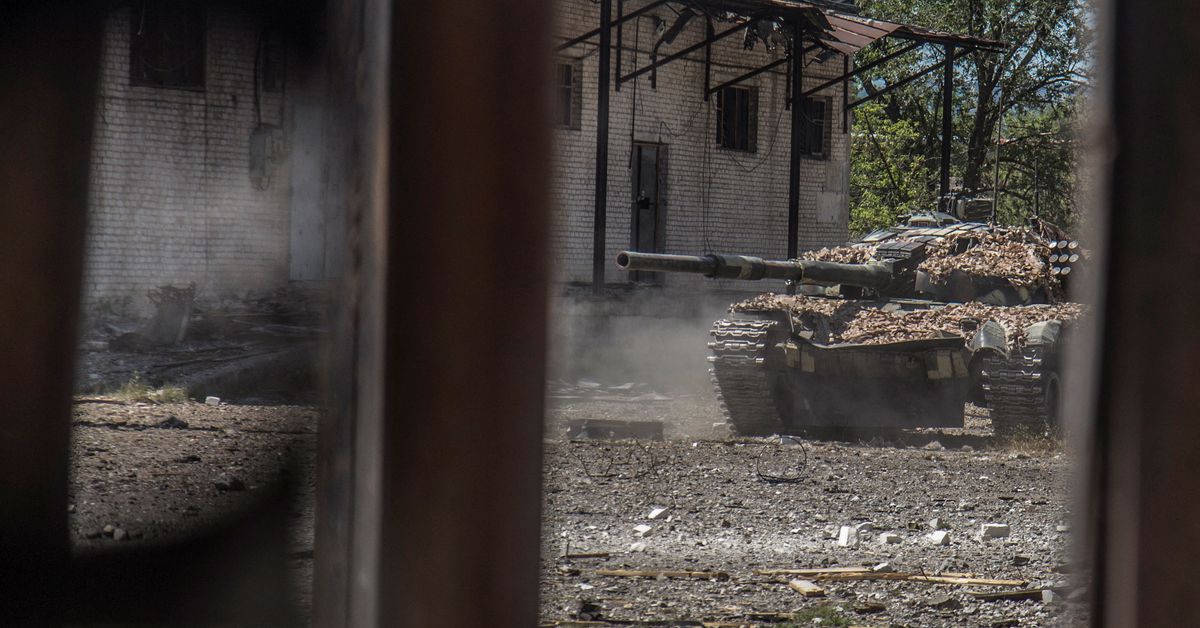 KYIV, June 24 (Reuters) – Ukraine signed on Friday its troops were withdrawing from the city of Sievierodonetsk, the scene of weeks of intense bombardments and street fighting, in a move that would be a significant setback in its struggle to defeat Russian forces.

Provincial governor Serhiy Gaidai said troops in the city had already received the order to move to new positions, but he did not indicate whether they had already done so or where exactly they were going.

“Remaining in positions smashed to pieces over many months just for the sake of staying there does not make sense,” Gaidai said on Ukrainian television.

The troops will “have to be withdrawn”, he said.

Gaidai was speaking on the day that marked four months since Russian President Vladimir Putin sent tens of thousands of troops over the border, unleashing a conflict that has now killed thousands of combatants and civilians, uprooted several million people, and has seen Ukrainian cities blasted to bits by Russian artillery and air strikes.

The war has also fueled a global energy and food crisis.

Some of the heaviest fighting of the war has taken place in Sievierodonetsk, where street-by-street combat has raged for a month with Russia painstakingly taking more ground.

The battle is key for Russia to establish control over the last remaining Ukrainian-held sliver of Luhansk province, which along with Donetsk makes up the Donbas region, Ukraine’s industrial heartland.

Sievierodonetsk’s fall would leave only Lysychansk – its sister city on the western bank of the Siverskyi Donets River – remaining in Ukrainian hands.

FORCES ‘HAD TO WITHDRAW’

“Our forces had to withdraw and conduct a tactical retreat because there was essentially nothing left there to defend. There was no city left there and, secondly, we could not allow them to be encircled,” said Oleksander Musiyenko, a Kyiv-based military analyst.

Russia’s tactics since its troops failed to capture the capital Kyiv early in the war involved ferocious bombardments of cities and towns followed by assaults by ground troops.

Analysts say the Russian forces are taking heavy casualties and face problems in leadership, supplies and morale. Nonetheless, they are grinding down Ukrainian resistance and making incremental gains in the east and south.

Ukraine’s general staff said on Friday the Russians were firing from tanks, mortars, artillery and jets, as well as mounting air strikes near Lysychansk and Sievierodonetsk and nearby towns. Reuters could not immediately verify the reports.

Ukrainian troops had repelled a Russian attack on the southern outskirts of Lysychansk, Governor Gaidai wrote on the Telegram app. But Russia had taken control of the village of Mykolaivka, located near a highway to Lysychansk, he said.

Ukraine’s foreign minister played down the significance of the possible loss of more territory in the Donbas.

“Putin wanted to occupy the Donbas by May 9. We are on June 24 and still fighting. Retreating from a few battles does not mean losing the war at all,” Dmytro Kuleba said in an interview with the Italian newspaper Corriere della Sera.

Russian control of the Donbas would allow it to link up with the already occupied Crimea to the south, which Moscow annexed from Ukraine in 2014.

Despite Ukraine’s battlefield difficulties, it has won new support from the West. On Thursday, European leaders approved Ukraine’s formal candidature to join the European Union.

Although the journey to full membership will take years, the move was a boost to Ukrainian morale – and will anger Putin.

Ukrainian President Volodymyr Zelenskiy told EU leaders in Brussels on Thursday their decision to accept Kyiv’s candidacy was among the most important for Ukraine since it broke from the Soviet Union 31 years ago.

“But this decision is not just being made for the benefit of Ukraine,” he said. “This is the biggest step towards strengthening Europe that could have been made right now … when the Russian war is testing our ability to preserve freedom and unity.”

Moscow launched what it calls its “special military operation” on Feb. 24, saying it wanted to ensure security on its borders. Kyiv and the West say Putin launched an unprovoked invasion to grab Ukrainian territory and bring the country back into Moscow’s fold.

Foreign Minister Kuleba, in an interview with Corriere della Sera, sounded pessimistic about the prospects of any peace talks soon.

“Only our military victory will convince Russia to engage in serious peace negotiations. Weapons will secure the diplomatic route,” Kuleba said. Kyiv was still open to the idea of ​​a meeting between Zelinsky and Putin in which “every point would be subject to dialogue,” he said. But Ukraine was engaged in an existential struggle, he said.

“This is a war between dictatorship and democracy not chosen by us.”

He also reiterated Kyiv’s appeals for more weapons from the West, particularly rocket launchers and cannons as well as more ammunition.

“The weapons are coming, and it would have been almost impossible without them. But they are not enough, they are not even enough to stabilize the Donbas front. Russia is stronger.”

Ernesto Castro
U.S. Treasury yields tick higher as investors weigh probability of a recession
What happened to Michael the Butler on Southern Charm? Here’s what we know