Ukrainians claim to retake ground ahead of latest talks

Home /World/Ukrainians claim to retake ground ahead of latest talks 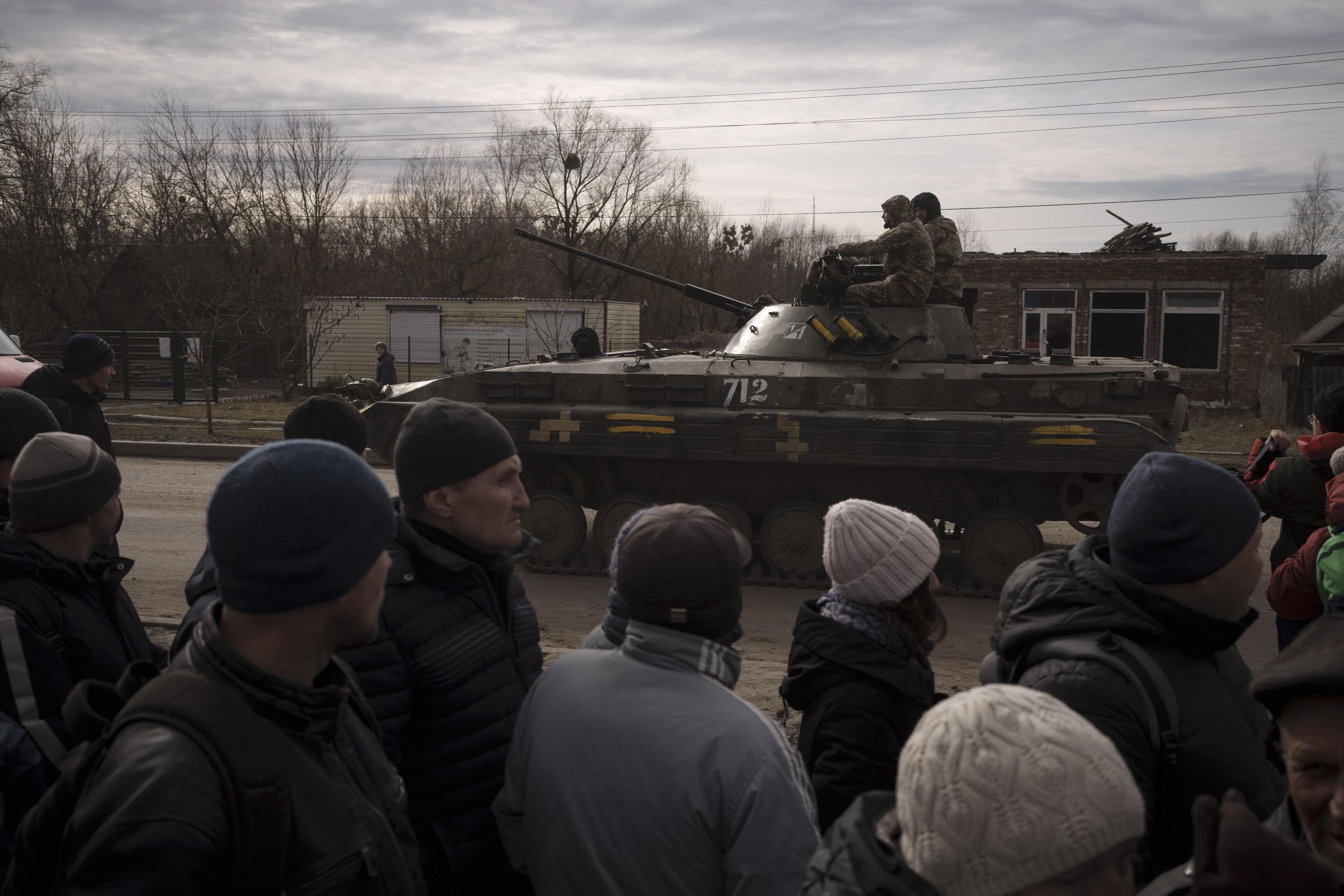 LVIV, Ukraine (AP) – Ukrainian forces claimed to have retaken a Kyiv suburb and an eastern town from the Russians in what is becoming a back-and-forth stalemate on the ground, while negotiators began assembling for another round of talks Tuesday aimed at stopping the fighting.

Ahead of the talks, to be held in Istanbul, Ukrainian President Volodymyr Zelenskyy said his country is prepared to declare its neutrality, as Moscow has demanded, and is open to compromise on the fate of the Donbas, the contested region in the country’s east.

The mayor of Irpin, a northwestern Kyiv suburb that has been the scene of some of the heaviest fighting near the capital, said Monday that the city has been “liberated” from Russian troops.

Zelenskyy warned that Russian forces are trying to regroup after losing the area.

“We still have to fight, we have to endure,” the president said late Monday in his nighttime video address to the nation. “We can’t express our emotions now. We can’t raise expectations, simply so that we don’t burn out. “

Irpin gained wide attention after photos circulated of a mother and her two children who were killed by shelling as they tried to flee, their bodies lying on the pavement with luggage and a pet carrier nearby.

A senior US defense official said the US believes the Ukrainians have also retaken the town of Trostyanets, south of Sumy, in the east.

The official, who spoke on condition of anonymity to discuss US intelligence assessments, said Russian forces remained largely in defensive positions near the capital, Kyiv, and were making little forward progress elsewhere in the country.

The official said Russia appeared to be de-emphasizing ground operations near Kyiv and concentrating more on the Donbasthe predominantly Russian-speaking region where Moscow-backed rebels have been waging a separatist war for the past eight years.

Late last week, with its forces bogged down in parts of the country, Russia seemed to scale back its war aims, saying its main goal was gaining control of the Donbas.

While that suggested a possible face-saving exit strategy for Russian President Vladimir Putin, it also raised Ukrainian fears that the Kremlin intends to split the country into two and force it to surrender a swath of its territory.

Meanwhile, a cyberattack knocked Ukraine’s national telecommunications provider Ukrtelecom almost completely offline. The chief of Ukraine’s state service for special communications, Yurii Shchyhol, blamed “the enemy” without specifically naming Russia and said most customers were cut off from telephone, internet and mobile service so that coverage could continue for Ukraine’s military.

Also Monday, an oil depot in western Ukraine’s Rivne region was hit by a missile attack, the governor said. It was the second attack on oil facilities in the region near the Polish border.

In recent days, Ukrainian troops have pushed the Russians back in other sectors.

In the city of Makariv, near a strategic highway west of the capital, Associated Press reporters saw the carcass of a Russian rocket launcher, a burned Russian truck, the body of a Russian soldier and a destroyed Ukrainian tank after fighting there a few days ago . In the nearby village of Yasnohorodka, the AP witnessed positions abandoned by Ukrainian soldiers who had moved farther west, but no sign of Russian troops.

And on Friday, the US defense official said the Russians were no longer in full control of Kherson, the first major city to fall to Moscow’s forces. The Kremlin denied it had lost full control of the southern city.

Russia has long demanded that Ukraine drop any hope of joining NATO, which Moscow sees as a threat. Zelenskyy, for his part, has stressed that Ukraine needs security guarantees of its own as part of any deal.

Over the weekend, Zelenskyy said he is ready to agree to neutrality. He also said that “Ukraine’s sovereignty and territorial integrity are beyond doubt,” while suggesting at the same time that compromise might be possible over “the complex issue of Donbas.”

The Ukrainian leader has suggested as much before but rarely commented so extensively. That could create momentum for the talks, for which the Russian delegates arrived in Istanbul on Monday, Turkish media reported.

Still, it was not clear how a compromise on the Donbas would square with maintaining Ukraine’s territorial integrity.

– President Joe Biden made no apologies for calling for Putin’s ouster, saying he was expressing his “moral outrage,” not a new US policy. Over the weekend, Biden said, “For God’s sake, this man cannot remain in power.” On Monday, the president said: “I’m not walking anything back.”

– UN Secretary-General Antonio Guterres said he has launched an effort to achieve a humanitarian cease-fire that would allow aid to be brought in and people to move around safely.

– Russia’s invasion has most Americans at least somewhat worried that the US will be drawn directly into the conflict and could be targeted with nuclear weapons, according to a poll from The Associated Press-NORC Center for Public Affairs Research.

– T he Group of Seven major economies rejected a Kremlin demand that some countries pay in rubles for Russia’s natural gas. That demand appeared designed to support the Russian currency, which is under pressure from Western sanctions.

Earlier talks, both by video and in person, have failed to make progress on ending the more than month-old war that has killed thousands and driven more than 10 million Ukrainians from their homes. That includes almost 4 million who have fled the country.

In the besieged southern port of Mariupol, the mayor said half the pre-war population of more than 400,000 has fled, often under fire, during weeks of shooting and shelling.

Alina Beskrovna, who escaped the city in a convoy of cars and made it to Poland, said desperate people are melting snow for water and cooking on open fires despite the risk of bombardment, “because if you don’t, you will have nothing to eat. ”

“A lot of people are just, I think, starving to death in their apartments right now with no help,” she said. “It’s a mass murder that’s happening at the hands of the Russians.”

Putin’s ground forces have become bogged down because of stronger-than-expected Ukrainian resistance, combined with what Western officials say are Russian tactical missteps, poor morale, shortages of food, fuel and cold weather gear, and other problems. Moscow has resorted to pummeling Ukrainian cities with artillery and airstrikes.

The Russians probably “thought it would be like Crimea,” which the Kremlin annexed in 2014. “But here it’s not like in Crimea. We are not happy to see them. Here they suffer and get killed. “

Andrea Rosa in Kharkiv, Nebi Qena in Kyiv, Cara Anna in Lviv and Associated Press journalists around the world contributed to this report.

Ernesto Castro
Everything at Kate Spade is on sale! Save up to 40%, today only
Snowpiercer: Season Four Production Begins, Clark Gregg and Michael Aronov Join TNT Series