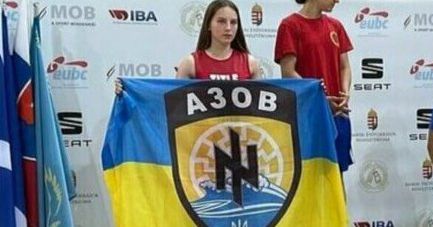 A Ukrainian boxer who won a silver medal at a boxing tournament in Hungary last week unfurled a flag emblazoned with the logo of the far-right Azov Regiment during the podium ceremony.

Diana Petrenko held up the Azov flag, which features a variation of the Nazi-appropriated “wolfsangel,” which appeared as part of the divisional insignia of several Waffen-SS units, including the notorious 2nd SS “Das Reich” Panzer Division. It is also the symbol of choice for neo-Nazis in Europe and the United States.

The 16-year-old boxer was repeatedly asked to remove the flag by tournament officials, which she eventually agreed to do. She later dedicated her gesture to Serhiy Ambros, a physician in the Azov Regiment who was killed in combat in 2015 at age 25. The gym where Petrenko trains is also named after Ambros.

“I wanted to pay tribute to Serhiy Ambrosa and the dead Ukrainian defenders,” Petrenko said. “The organizers did not like my gesture. They asked me twice to hide the flag, but I didn’t want to do it. “

The Azov regiment is a far-right former paramilitary group that was upgraded to a unit of the National Guard of Ukraine at the start of Russia’s invasion in February. The group was initially a volunteer militia that formed in May 2014 to fight the Russian separatist forces who had seized portions of the Donbas region of eastern Ukraine. The group has been criticized for propagating neo-Nazi and white supremacist ideologies, and has also been accused of violating international humanitarian law by the United Nations.

While the Azov regiment does maintain connections to neo-Nazism, the group is at the heart of the Kremlin’s wartime propaganda. Their role in Ukraine has been greatly exaggerated by Russian state media to support the ongoing war, as well as to back up Russian president Vladimir Putin’s goal of “denazification” in Ukraine.