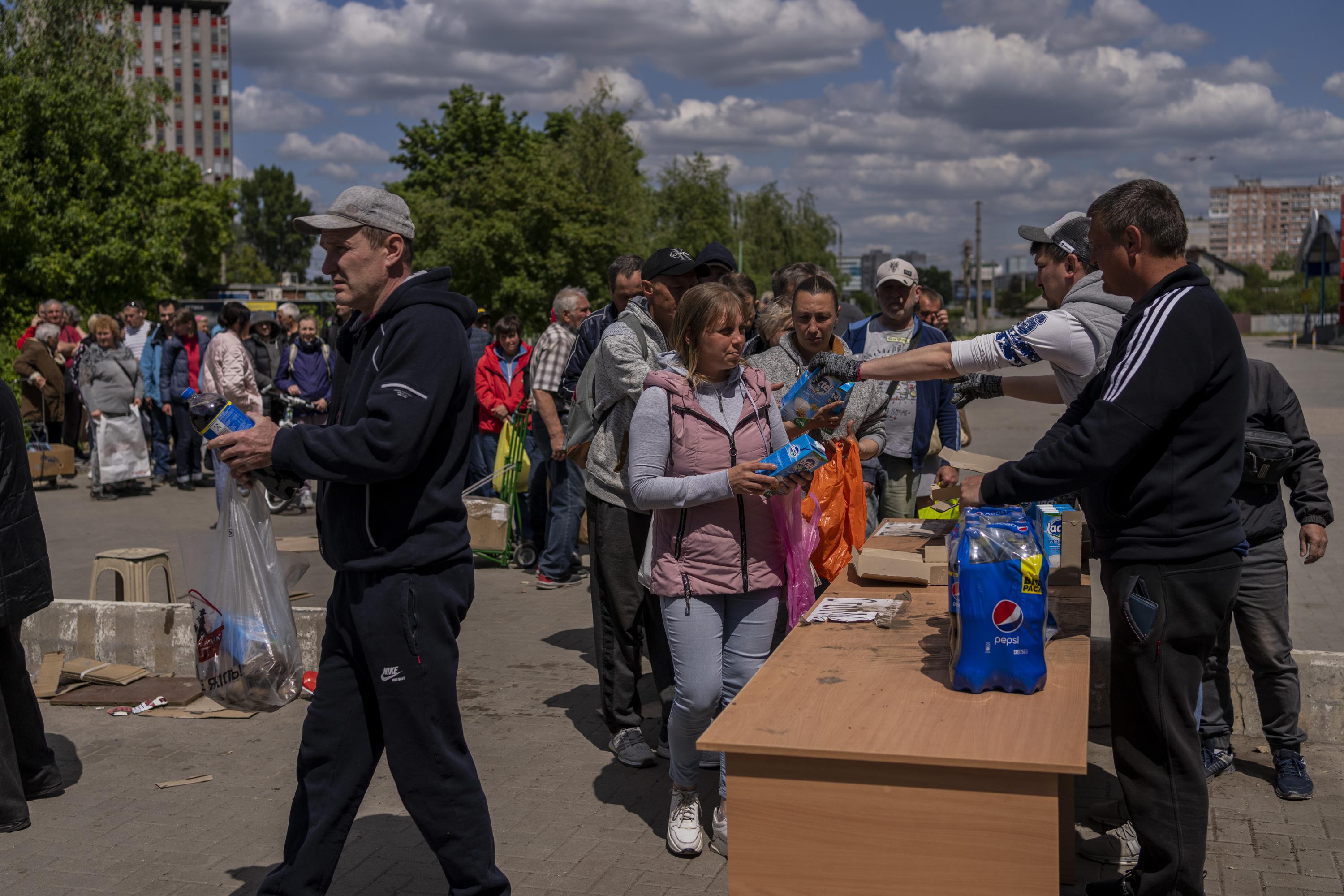 KYIV, Ukraine (AP) – Ukrainian authorities said Friday that their troops repelled a Russian attack in the east, as Moscow struggled to gain ground in the region that is now the focus of the war even while intensifying its campaign there..

Battered by their monthslong siege of the vital port city of Mariupol, Russian troops need time to regroup, Britain’s Defense Ministry said in an assessment – but they may not get it. The city and the steelworks where Ukrainian fighters have held off the Russian assault for weeks have become a symbol of Ukraine’s stoic resistance and surprising ability to stymie a much larger force.

On Friday, a number of soldiers – just how many was unclear – were still holed up in the Azovstal plant, following the surrender of more than 1,700 soldiers in recent days. The dead from the battle are also being removed, according to Denis Prokopenko, the commander of the Azov Regiment, which is among those defending the plant.

Speaking of the “fallen heroes,” Prokopenko said: “I hope soon relatives and the whole of Ukraine will be able to bury the fighters with honors.”

With the battle for the steel plant winding down, Russia has already started pulling troops back from the site. But the British assessment indicated Russian commanders are under pressure to quickly send them elsewhere in the Donbas.

“That means Russia will probably redistribute its forces swiftly without adequate preparation, which risks further force attrition,” the ministry said.

The Donbas is now President Vladimir Putin’s focus after his troops failed to take the capital in the early days of the war.. Pro-Moscow separatists have fought Ukrainian forces for eight years in the region and held a considerable swath of it before Russia’s Feb. 24 invasion.

But the effort to take more territory there has been slow-going. In a sign of Russia’s frustration with the war, some senior commanders have been fired in recent weeks, the British Defense Ministry said.

Russian forces attacked the cities of Lysychansk and Severodonetsk, both in the Luhansk region of the Donbas, the region’s governor said Friday. Twelve people were killed, and more than 60 houses were destroyed across the region, Serhiy Haidai said in a Telegram post.

But the attack on Severodonetsk was unsuccessful. Both Haidai and Ukraine’s General Staff of the military said Russia took losses and retreated. Their reports could not be independently verified.

Still, Russia’s struggles in the east only seemed to translate into an intensifying offensive that is inflicting increasing suffering.

“It’s hell there, and that’s not an exaggeration,” Ukrainian President Volodymyr Zelenskyy said of the campaign.

“The brutal and completely senseless bombardment of Severodonetsk. Twelve dead and dozens wounded there in just one day, ”he said in his nightly video address Thursday night to the nation.

Meanwhile, a young Russian soldier, accused of killing a Ukrainian civilian, awaits his fate in Ukraine’s first war crimes trial. Sgt. Vadim Shishimarin, a 21-year-old soldier in a Russian tank unit, has pleaded guilty, but the prosecution still presented its evidence, in line with Ukrainian law.

Shishimarin told the court Thursday that he shot 62-year-old Oleksandr Shelipov after he was ordered to – and apologized to the widow.

Ukraine’s surprisingly stiff resistance has been bolstered by Western arms and funding – and more help was on the way this week.

The Group of Seven leading economies and global financial institutions agreed this week to provide More money to bolster Ukraine’s public finances, bringing the total aid to 19.8 billion, Germany’s finance minister said Friday. The goal is to ensure that Ukraine’s financial situation does not affect its ability to defend itself from Russia’s invasion.

On Thursday, US lawmakers overwhelmingly approved its own aid package of $ 40 billion of military and economic assistance for Ukraine as well as its allies.

While Mariupol was a target from the start of the invasion and has been under effective Russian control for some time, a group of Ukrainian fighters have held out in the sprawling steel plant – symbolic of the way Ukrainian forces have managed to grind down the Russian troops. .

While hundreds of fighters have left, in a brief video message, the deputy commander of the Azov Regiment said he and other fighters were still inside.

“An operation is underway, the details of which I will not announce,” Svyatoslav Palamar said.

While Ukraine has expressed hope for a prisoner exchange for those who have surrendered, Russian authorities have threatened to possibly try for war crimes some of the Azovstal fighters.

The far-right origins of the Azov Regiment have been seized on by the Kremlin as part of an effort to cast Russia’s invasion as a battle against Nazi influence in Ukraine.

McQuillan reported from Lviv. Associated Press journalists Yuras Karmanau in Lviv, Andrea Rosa in Kharkiv, and Aamer Madhani in Washington and other AP staffers around the world contributed.