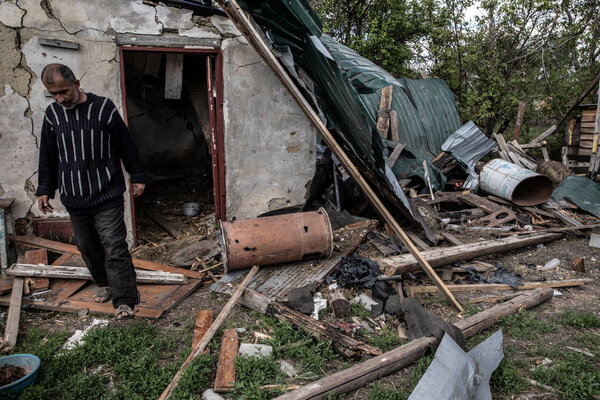 WASHINGTON – President Biden vowed on Thursday to speed up Finland and Sweden to NATO membership, seeking to redraw the map of Europe to the West’s advantage less than three months after President Vladimir V. Putin of Russia began his invasion of Ukraine.

In a ceremony at the White House Rose Garden with President Sauli Niinisto of Finland and Prime Minister Magdalena Andersson of Sweden, Mr. Biden said he was immediately submitting to the Senate the treaty language needed to make the two countries the newest members of the alliance. Formal accession to the alliance will require the approval of the other 29 member nations as well.

While there is little doubt that the Senate and most other NATO members will overwhelmingly approve of a treaty of accession, Turkey – which under President Recep Tayyip Erdogan has had a sometimes close and sometimes contentious relationship with Moscow – has expressed objections that could slow the process and require negotiations to address its concerns.

“These two countries, especially Sweden, are a complete hotbed of terrorism,” he said. Erdogan said on Thursday, an apparent reference to what the Turkish leader contends is their tacit support for Kurdish separatists.

Secretary of State Antony J. Blinken met with his Turkish counterpart in New York on Wednesday, and Finnish officials said they were in talks with Turkey as well. Speaking to reporters on Wednesday, Jake Sullivan, Mr. Biden’s national security adviser, expressed confidence that “Turkey’s concerns can be addressed” and that Finland and Sweden would ultimately be able to join the alliance.

But Mr. Erdogan is famously unpredictable, and he could easily take advantage of his leverage as a potential spoiler to press for his own demands, including a lifting of sanctions on his country for its purchase of Russian-made antiaircraft systems.

Jens Stoltenberg, NATO’s secretary general, said on Thursday that he expected Turkey to resolve its concerns.

“I am confident that we will come to a quick decision to welcome both Sweden and Finland to join the NATO family,” he said, adding, “We are addressing the concerns that Turkey has expressed.”

Mr. Erdogan’s demands aside, the ceremony at the White House was a remarkable moment in the history of the Western alliance – a rare instance in history where a single event, Russia’s invasion, changed sentiment, and probably NATO’s borders, almost overnight.

Under an agreement with the Soviet Union, Finland stayed outside the alliance, which was created to contain Russia after World War II. It remained independent in the post-Soviet era even after joining the European Union and growing ever closer to the West. Until now, Sweden had kept to more than 200 years of neutrality.

But that posture has been quickly abandoned after Mr. Putin’s decision in February to invade Ukraine, which is not a NATO member. Both Finland and Sweden suddenly realized that the threat from Russia had changed and that their status as a bystander to great-power conflict was now a huge risk.

The speed of the reversal has been so great that there has been virtually none of the debate that took place after the fall of the Berlin Wall in 1989, when even some of Washington’s most experienced Cold War diplomats warned that the more Russia felt encircled, the higher the chances that it might eventually lash out, especially if the effort to integrate the country with the West failed.

On Wednesday, Mr. Sullivan said that Mr. Biden had asked his national security officials whether they backed the addition of Finland and Sweden to the alliance and that they had “emphatically supported” the move in an unanimous fashion.

The Rose Garden ceremony deliberately contained echoes of a state visit, complete with a military band. Mr. Biden characterized the move to usher Finland and Sweden into the alliance as almost a formality, noting that both countries had contributed forces to conflicts in Kosovo, Afghanistan and Iraq – the major NATO commitments of the past 20 years – and that they were strong democracies that “Meet every NATO requirement and then some.”

Mr. Biden argued that the two countries would add to the alliance’s firepower.

Finland has a sophisticated military that runs complex operations to track Russian activity in the seas of Northern Europe and spends heavily on modern equipment. Sweden is a more difficult case: it dismantled some of its military power and, as Ms. Andersson conceded, would have to reorient its budget to spend 2 percent of gross domestic product on defense, the target for NATO members.

But for the United States, the primary utility of having the Nordic countries join the alliance is the message sent to Mr. Putin. In December, the Russian president demanded that the United States and NATO sign a treaty that would withdraw forces from former Soviet states and that they restrict training activities and placement of arms.

Instead, NATO’s border with Russia would now extend another 810 miles, and the alliance’s expanded capabilities would complicate Russia’s defenses.

Mr. Putin’s anticipated reaction is the subject of speculation and planning sessions. The Russian leader and his aides have so far responded calmly, calling the move a mistake and saying they would react if weapons were placed close to Russia’s borders.

But Finland and Sweden now see Mr. Putin as a far greater threat to their security than Soviet leaders were during the Cold War. For Mr. Biden, the change in sentiment in the two countries is an opportunity to fundamentally fortify the trans-Atlantic alliance and weaken Russia while Mr. Putin remains in power.

Mr. Biden alluded to that goal – which he has not fully articulated – in his comments at the White House on Thursday. “In recent years, doubts began to arise,” he said. “Is NATO still relevant?”

He said the Russian invasion proved it remained “the indispensable alliance for the world we face today” and that the decisions made by Sweden and Finland to choose sides were “testament to that commitment.”

“Finland and Sweden make NATO stronger,” he said, “not just because of their capacity but because they’re strong, strong democracies.”

Before the visit by Mr. Niinisto and Ms. Andersson, Mr. Biden also issued a statement offering an informal security guarantee to the two nations while they wait for formal membership in the alliance. That was intended to pre-empt any effort by Russia to intimidate the countries – perhaps with cyberattacks, perhaps with air or sea exercises – while they are awaiting membership, and the formal protections that go with it.

But Mr. Niinisto alluded to the importance of speed. “Now that we have taken this first decisive step, it is time for NATO allies to weigh in,” he said. “We hope for strong support from all allies and for a swift ratification of our membership once it’s agreed.”

He referred directly to Turkey, saying that “we will commit to Turkey’s security, just as Turkey will commit to our security,” and adding, “We take terrorism seriously.” That seemed to be an allusion to the Turkish concern about the Kurdish militants.

Ms. Andersson, turning to Mr. Biden and noting to laughter that “Swedes first set foot in your home state of Delaware in 1638,” said the invasion of Ukraine “reminds us of the darkest days of European history.” It was “a watershed moment for Sweden,” she said, that forced Swedes to rethink the essence of their security.