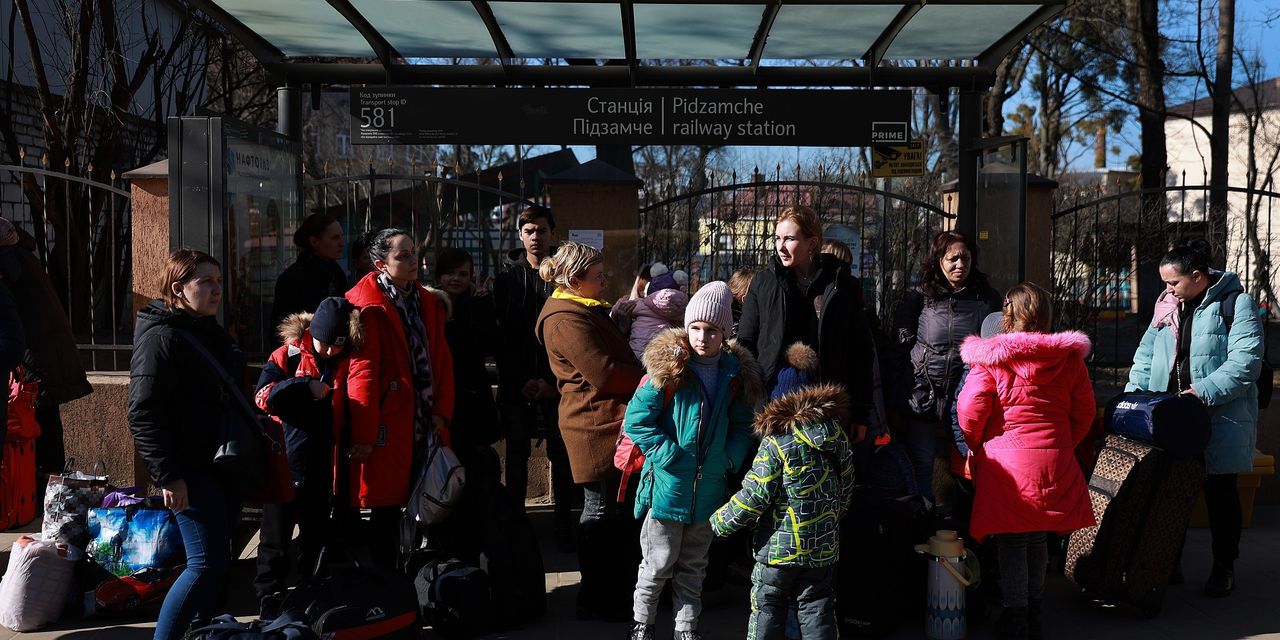 The US will accept up to 100,000 refugees fleeing the fighting in Ukraine as the humanitarian crisis from Russia’s attack worsens on its neighbor, Biden administration officials said Thursday.

More than 10 million people in Ukraine have been uprooted by the fighting, the United Nations estimates. More than 3.6 million of them have fled the country, the UN says, most bound for Poland.

The announcement came while President Biden was in Brussels for a series of meetings with NATO leaders and allies over how to respond to Russia’s aggression.

The administration also hasn’t offered a timeline over which resettlements would occur, though two people familiar with their discussions say the government is preparing for arrivals through 2023.

A senior official said the administration is “working in particular to expand and develop new programs with a focus on welcoming Ukrainians who have family members in the United States.” The official added that the US is “committed to protecting the most vulnerable among the refugee populations that have already fled,” such as gay and transgender individuals, those with medical needs, and dissidents.

Iryna Mazur, an immigration attorney in Philadelphia and the honorary consul representing Ukraine in the city, said she was grateful to the White House but hoped details would be made public soon because she knows many Ukrainians who are desperate for help. She also said accepting 100,000 Ukrainian refugees ultimately wouldn’t be enough, though she added many people would be happy to return to Ukraine if the situation in their country improves.

“I truly hope this is just the first number, because at this point we are more than three million Ukrainians dispersed throughout Europe,” she said.

An undetermined number of the 100,000 could formally come to the US through its Refugee Admissions Program, meaning they would be granted green cards and resettlement assistance. The US has a special refugee pathway known as the Lautenberg program to help Ukrainian religious minorities and others from countries that make up the former Soviet Union that would likely see a boost under the administration’s plans.

The official said others would likely come on expedited visas, such as those designed for Americans to sponsor their family members abroad, or via a temporary immigration program known as humanitarian parole.

The US similarly brought more than 76,000 Afghan evacuees to the country using humanitarian parole following the fall of Kabul to the Taliban. While the program offers a quicker alternative to most other immigration programs, which involve more paperwork and vetting, it also strands those in the US without a permanent legal status. That could work for Ukrainians who need temporary shelter but who would want to return home if it becomes safe.

Hundreds or more Ukrainians with family or other ties to the US have also flown to Mexico in recent weeks to ask for protection at border crossings into the US Border officials are granting Ukrainians one year of humanitarian parole. Russian or Belarusian migrants asking for similar protections on the US southern border are being denied them.

The announcement came along with an additional $ 1 billion in assistance to European nations and non-governmental groups working for Ukrainian refugees in Europe displaced by the conflict, the White House said.

The European Union has admitted around 3.5 million Ukrainian refugees since the war began, with the bloc permitting people fleeing the war to come without a visa and with the right to work for two years.

The bloc has also rolled out core services for the people arriving, providing them with food, shelter and education. Ireland, which is outside the bloc’s visa-free travel zone, is waiving visas for Ukrainians. Britain, which is no longer in the EU, is now permitting Ukrainians to come, provided they have a sponsor.

The government in Poland, where 2.2 million people have arrived, has been appealing for international help, particularly from the US and UK Unlike the 2015 refugee crisis — when people escaping wars in Syria and Libya mainly went to the continent’s wealthiest nations, like Germany— Ukrainians have been generally settling in Central European states like Poland and Slovakia. Both nations speak a language that is similar to Ukrainian, share cultural ties and centuries of history, and their labor markets have been tight.

Notes on the News

Keep up with major developments in Ukraine, plus today’s headlines, news in context and good reads, free in your inbox every day.

Earlier this month, Polish President Andrzej Duda pressed visiting Vice President Kamala Harris during an hourlong meeting in Warsaw to expedite US visas for Ukrainians in Poland hoping to join family members in the US Warsaw Mayor Rafał Trzaskowski urged Canadian Prime Minister Justin Trudeau to do the same. thing, during a separate meeting in the Polish capital.

“This is a test of us: Putin wanted to weaken us, to divide us, this is his tactic, to destabilize countries with refugees,” he said. Trzaskowski in an interview. “We all know it… this is not going to be just for a week or two.”

IniTarini Party and Drew Hinshaw contributed to this article.

Write to Catherine Lucey at catherine.lucey@wsj.com, Laurence Norman at laurence.norman@wsj.com and Michelle Hackman at michelle.hackman+1@wsj.com