Tyler Perry’s Sistas: Are Hayden and Karen More Alike Than We Thought? 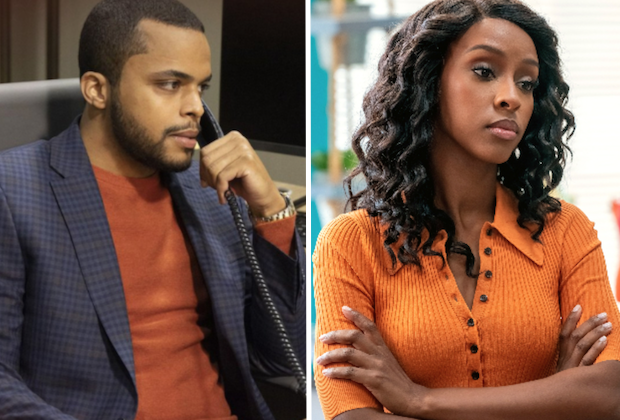 Bad guys don’t always wear black. And if the wardrobe department behind Tyler Perry’s Sistas has taught us anything, it’s that the color orange can be just as sinister.

At the end of Season 3, for instance, Fatima was able to expose Hayden’s eavesdropping at work by intentionally saying, during a call, that she would find it sexy if he rocked an orange shirt and blue jeans. The next day, that was exactly what the lovesick and voyeuristic attorney wore.

Fast forward to Season 4A, and Karen put on – you guessed it – an orange shirt and blue jeans while confronting Fatima about her relationship with Zac. The two eventually came to an accord when Karen confessed that she was jealous because Zac wasn’t the best version of himself with her, the way he is with Fatima. But sadly, by the midseason finale, Karen was back in Fatima’s face acting wild and picking fights. Chances are the two will keep butting heads when the hit BET drama’s Season 4B kicks off Wednesday, June 1 at 9 / 8c.

But does this outfit and color combination make Karen a villain, or was it a comical coincidence? Ebony Obsidian certainly hopes her character isn’t evil, and has even asked that Perry give her alter ego more sympathetic storylines moving forward so fans will stop being mean to her on social media.

While Karen and Hayden have never actually interacted on Sistas, Chris Warren, the actor who plays him, says the two characters do have a few things in common. For instance, neither one of them wants Zac and Fatima aka “Zatima” to be together.

“I never thought about it, but an orange shirt and blue jeans is the new evil outfit,” Warren tells TVLine with a chuckle. “Hayden is the most hated character on the show and then Gary. That would make Karen No. 3, but her motivations are different. Hayden is even more hated than Gary, but they both have a belief that they can’t lose. That’s why people hate them. Karen isn’t trying to win. She just can’t believe Zac is rich now and moved on without her. “

Warren can’t reveal if that means Hayden and Karen will eventually team up – they do have similar sartorial tastes – but does add that anything is possible on the soapy show. After all, Hayden and Gary are besties now, and who could’ve predicted that?

“Each season, Tyler has allowed me to take things further and further especially in Season 4B, and I’m here for it 100 percent,” Warren reveals. “You’re really going to see how far things go with Hayden and fans are going to love it, while really hating him even more. They will keep hating Hayden, but they are going to love Season 4B. “

Are you worried that Karen is just as bad as Hayden on Sistas? Drop your thoughts in the comments.