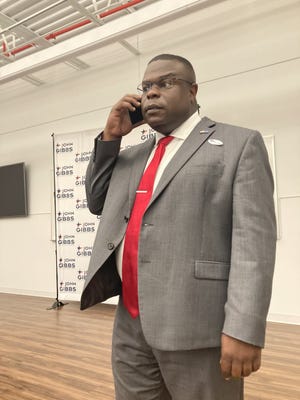 A political appointee in former President Donald Trump’s Housing and Urban Development agency, Gibbs pitched himself as an ultra-conservative replacement for incumbent Meijer of Grand Rapids Township, who was one of 10 House Republicans to impeach then-President Donald Trump after the Jan. 6, 2021, US Capitol riot.

Gibbs declared victory early Wednesday morning at a watch party at his campaign headquarters in Wyoming, a suburb of Grand Rapids.

Meijer conceded the race around 1:30 am Wednesday in a statement.

Gibbs had about 52% of the vote to Meijer’s 48% with about 87% of precincts reporting in a congressional district encompassing parts of Kent, Muskegon and Ottawa counties.

Gibbs told reporters Trump encouraged him to “keep it up” and continue “to kick butt.”

In a victory speech surrounded by supporters in the early morning hours Wednesday, he wished Meijer “the best in his future endeavors.”

“From here on out, we’re facing a challenge in November with a Democrat,” he said. “I think it’s going to turn out very favorably for us.”

Gibbs is expected to face a general election in a district President Joe Biden won in 2020 and that has been identified as one of the few districts Democrats may be capable of flipping in a tough mid-term election year. The Cook Political Report changed the race from a “toss up” to a “lean Democrat” after it called the race for Gibbs.

The contest between Meijer and Gibbs garnered national attention as the Republican Party continues to grapple with cleavages between traditional conservatives and Trump loyalists. If he loses, Meijer will be the sixth of the 10 House Republicans who voted for impeachment to leave at the end of his term. Two others faced primaries Tuesday.

Trump endorsed Gibbs but notably did not come to Michigan to campaign for him in the final days of the campaign, despite Gibbs’s struggles with fundraising as Meijer and allies poured millions into opposing him.

Dave Wasserman, the US House editor of the Cook Political Report, tweeted around 10 pm that the “biggest surprise of the night so far” was Meijer’s strength in the primary.

But what appeared to be a neck-and-neck race much of the evening diverged as results came in boosting Gibbs and setting Meijer further back. Shortly after speaking with Gibbs on the phone, Meijer released a statement congratulating his opponent.

“I’m proud to have remained true to my principles, even when doing so came at a significant political cost,” Meijer said in the statement. “Although this was not the outcome we hoped for, I will continue to do everything possible to move. the Republican Party, West Michigan, and our country in a positive direction.”

Gibbs, 43, grew up in Lansing and studied computer science at Stanford University. He worked as a software engineer for startups in Silicon Valley and eventually joined Apple to work on the iPhone. A fluent Japanese speaker, he left California for Japan to serve as a Christian missionary for seven years.

He did a master’s in public administration at Harvard University before joining the Trump administration’s HUD, overseeing homelessness programs and community development block grants. He moved to Byron Center, south of Grand Rapids, after Trump allies recruited him to run against Meijer.

Gibbs has branded himself as a Trump-approved replacement who says it was “mathematically impossible” for President Joe Biden to have won the 2020 election and defends claims of election fraud that have been dismissed by courts, legislative investigations and audits for a lack of evidence. .

After casting his ballot in Byron Center south of Grand Rapids Tuesday morning, Gibbs was asked whether he would accept the results of this election.

“We’ll see,” he said. “If the election’s on the up-and-up there will be no problem.”

Meijer, 34, is the son of Meijer Inc. Superstores Executive Chairman Hank Meijer. He grew up in East Grand Rapids, went to Columbia University and served in an Army intelligence unit in Iraq.

He later worked as a conflict analyst in Afghanistan and got an MBA at New York University before running to succeed Republican-turned-Libertarian former US Rep. Justin Amash in 2020.

Meijer billed himself as an effective lawmaker who has fought for veterans and pushed back against Biden administration policies he argues have contributed to high inflation and gas prices. He stands by the decision to impeach Trump after his supporters mobbed the capitol on Meijer’s third day in office.

“We always expected this to be a tight race,” Meijer told The News early Wednesday morning before the results came in. “There were a lot of folks who had counted us out weeks, if not months, ago. I’m proud of what strength we’ve been able to demonstrate so far.”

Outside groups poured more than $3.6 million into the 3rd District GOP primary race, primarily supporting Meijer and opposing Gibbs. One political action committee backed by Meijer’s family, Principled Leadership for Michigan, has spent almost $1.4 million on the race this cycle.

Meijer’s campaign and leadership PAC spent more than $2 million this cycle, compared with just under $334,000 spent by the Gibbs campaign.

But last Tuesday, the Democratic Congressional Campaign Committee announced it would spend $425,000 to run a TV ad in the Grand Rapids area boosting Gibbs in the last week before the primary.

The ad was a fake attack on Gibbs that was seen by many in both parties as a move to promote his name among Trump’s base. It claimed Gibbs is “too conservative” for west Michigan but also said he was “handpicked” by Trump to run for Congress, worked in his administration and would pursue Trump’s policies in office.

Meijer decried the spending as hypocritical. Gibbs said of the ad: “I don’t know what their strategy is and I don’t really care.”

A change in west Michigan

Sue Atkinson, a poll worker in Grand Rapids Township, said she cast her vote for Gibbs.

“I just voted for a change,” Atkinson said. She added that it felt like Meijer was assuming he would get her community’s support, and that she was receiving two to three mailers a day from his campaign.

“Then we knew he was running scared because he did so much mailing. That was the biggest turnoff.”

State Rep. Tommy Brann, R-Wyoming, attended the party. He said he supports Meijer because he’s an honest, humble and “good human being.”

“I make mistakes too,” Brann said of Meijer’s impeachment vote, which he disagreed with. “Just because he made one mistake doesn’t mean you run away from somebody you like.”

Mark Mochel of Grand Rapids also attended Meijer’s watch party, which disbanded around midnight. A self-described moderate conservative, he said he feels like he no longer has “a political home.”

“The radicals on both sides are controlling the talking points, and I think Peter Meijer represents a more moderate position,” he said. “I think it would be a huge detriment to this community but also to the country if we push out any moderates from either side.”

About 10 miles south, Gibbs supporters held a watch party at his campaign office on top of a real estate brokerage.

Some supporters sang “MAGA” to the tune of “YMCA,” miming the letters with their arms raised high. Later, they danced to “Johnny B. Goode” by Chuck Berry. Cheers erupted when early returns showed Gibbs leading 63% to 37% shortly after 9 pm.

Brenda Wodarski of Rockford was among those dancing.

“If they don’t win, people haven’t done their homework,” she said of Gibbs and Republican gubernatorial candidate Ryan Kelley, who lost Tuesday to conservative commentator Tudor Dixon. “They’re listening instead of researching. Everybody needs to do their own research.”

Also in attendance was Robert “RJ” Regan, a failed GOP state House candidate who was condemned by Michigan GOP Chair Ron Weiser after he said he tells his daughters, “If rape is inevitable, you should just lie back and enjoy it.”

Gibbs and Meijer shared similar stances on many conservative policies, including abortion, immigration, inflation and government spending. Both supported the recent US Supreme Court decision to overturn Roe v. Wade and do not support exceptions for abortion in cases of rape or incest.

They disagree on the results and fallout from the 2020 presidential election: Gibbs argued that the 2020 election was rife with fraud and that Trump was the true winner of the national presidential race, despite multiple audits and court cases at nearly every level of government failing to turn up evidence that supports his theory.

Meijer acknowledges that Biden won the election and said Trump “bears responsibility for inciting the insurrection.”

Analysts have said Meijer is the only candidate who stands a chance at beating Democratic nominee Hillary Scholten in the general election in the newly formed 3rd, which Biden won in 2020. Gibbs has pushed back on that analysis, saying Meijer would stand less of a chance. because of his waning support among his own party.

“If John Gibbs wins that primary, then Democrats will take that seat as long as Hillary Scholten is alive on Election Day,” Adrian Hemond, CEO of the consulting firm Grassroots Midwest, told The News last month.

“This is a hyper-competitive seat, and if the Republicans did not have a well-heeled incumbent with a very good biography and a more moderate tone in this district, they would be in trouble here. And if Congressman Meijer loses, that’s where they’ll find themselves.”