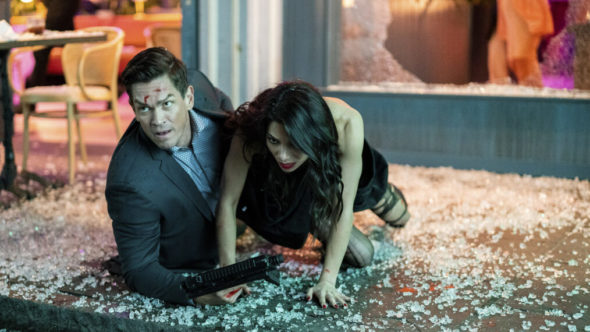 True Lies finally has a home. The CBS network has ordered the new action series which is based on the 1994 James Cameron film starring Jamie Lee Curtis and Arnold Schwarzenegger. The TV show will star Steve Howey and Ginger Gonzaga (above), as well as Erica Hernandez, Omar Miller, Mike O’Gorman, Annabella Didion, and Lucas Jaye.

The logline reads: “Shocked to discover that her bland and unremarkable computer consultant husband is a skilled international spy, an unfulfilled suburban housewife is propelled into a life of danger and adventure when she’s recruited to work alongside him to save the world as they try to Revitalize their passionless marriage. “

The series comes from McG, and it has been in the works for six years, per Deadline. The following was revealed about the pick up of the project by CBS:

Bringing True Lies to television has been a longtime passion for McG. He started pursuing the idea in 2016, shortly after he signed an overall deal with 20th TV, whose sister feature studio produced the movie. The following year, a TV series reboot with Marc Guggenheim as a writer sold to Fox with a put pilot commitment. It did not go beyond the script stage but McG continued his efforts. In a 2019 interview, he indicated that a True Lies TV series could still happen, possibly at Disney +.

A year later, McG was tapped as director and executive producer of 20th TV’s series reboot of another popular movie, Turner & Hooch, for Disney +, created and executive produced by Nix. The two hit it off and partnered on True Lies. Their pitch landed at CBS in fall 2020 and the project was picked up to pilot in early 2021. Then, in what often is considered a death knell for a pilot, True Lies was pushed.

A premiere date for the True Lies reboot will be set later.

What do you think? Are you excited to see True Lies on CBS next season?