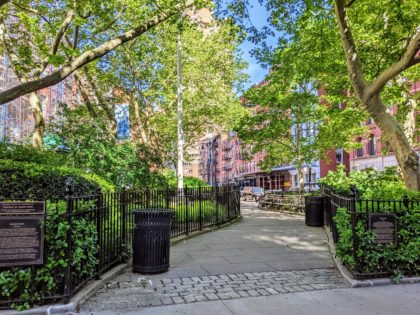 DUANE PARK WILL HOST ITS OWN BDAY PARTY
The Friends of Duane Park is closing Duane Street, building a long community table for 150 guests, and hosting a fundraising dinner for the park on Sunday, Sept. 18, starting at 4p. The menu will be created by Restaurant Marc Forgione with beverages paired to match by Tribeca Wine Merchants and birthday cake from Duane Park Patisserie. Tickets are $ 225 until August 1, and there 275 thereafter.

TWO LOCAL TEEN BANDS TEAM UP THIS WEEKEND
Tribecan Jagger Walk’s fashion company Runaway New York is producing a concert that will feature young musicians and bands – two of which have Tribeca roots – with music that is for teens and by teens. The concert, called Nights, will be held on Saturday, July 16, in Industry City, Brooklyn. Doors open at 6p. The “micro” festival will feature Laundry Day and Quarters of Change, among others. A portion of the profits from the show will go towards Citymeals on Wheels. Get tickets here.

NYLO FUNDRAISER HITS 9K
The fundraiser for Ukraine sponsored by the owners of NYLO and the trainers and clients who work at their studio raised $ 9k for Ukraine thanks to donations in lieu of class fees. A good effort by the neighborhood.