Tim Elko, Ole Miss’ heartbeat, leads the Rebels to the brink of the CWS championship series 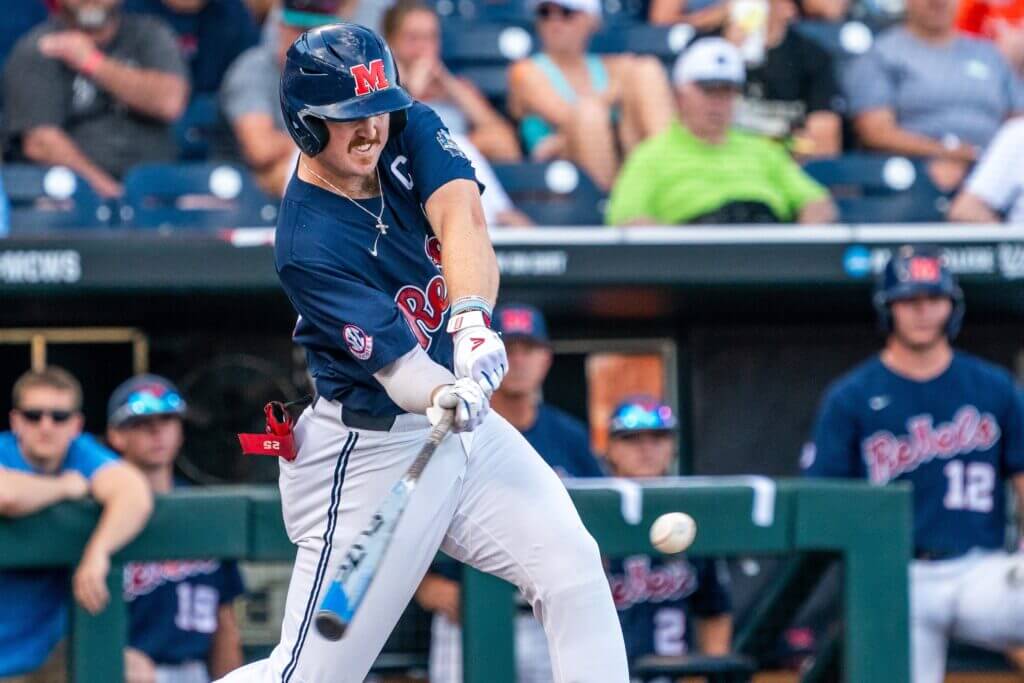 OMAHA, Neb. – Tim Elko, the fifth-year senior first baseman and first three-year captain in the history of Ole Miss baseball, caught the pop fly behind first base that clinched a super-regional sweep at Southern Miss and sent the Rebels to the College World Series.

Of course, it was Elko.

Elko’s rocky journey over five seasons mirrors the quest of Ole Miss as a program to reach the pinnacle in Omaha. The Rebels, after a 3-2 loss Wednesday night against SEC West rival Arkansas at this CWS, remain one victory from a berth in the best-of-three championship series against Oklahoma.

Elko stands at the center of a remarkable run for the Rebels. The final at-large selection for the NCAA field of 64, they were the last team to lose a game in the tournament. Elko is their heartbeat, having overcome injury last year to star in the postseason. This season, he helped direct a steep climb required just for Ole Miss to play in June.

Tim Elko is that dude.

“No, it’s not just me,” Elko said. “This team has come together. We’ve gone through so much and been able to get here here as a team. It’s an honor to be called a captain and considered a leader, but I’m just so proud of how we’ve come together and played our best baseball when it matters. “

He’s being the modest, according to the people around Elko.

Elko’s career trajectory began low. He started 30 games in 2018 and 2019. Then his hot open to 2020 counted for nothing as the season went up in smoke. The core of that 2020 team, which finished 16-1, returned after the pandemic-shortened season.

On April 5, 2021, Elko tore an ACL while running out a ground ball against North Alabama.

Another year ruined, right? Not quite. Elko came back less than four weeks after the knee injury. He hit two grand slams in NCAA regional play, posting a .778 / .858 / 2,111 slash line in 14 plate appearances. Scott Berry, coach of Southern Miss, who lost to the Rebels in the regional championship, compared Elko to Kirk Gibson – who’s most famous for a walk-off homer in the 1988 MLB World Series while hitting on two injured legs.

Ole Miss last year fell one win short of the CWS in a super regional at Arizona.

Elko underwent knee surgery in June. His decision to wait on the procedure killed any chance to get drafted into pro baseball at age 22.

Still, sitting in the first-base dugout at Charles Schwab Field after the Rebels’ second win in Omaha this week, he described the return last season and subsequent production at the plate as “a miracle.”

“I wouldn’t want it for any other guy,” Bench said. “No matter what’s going on, he’s going to keep us together. He’s handled everything amazingly well. To see him go through that and to come back and play and then to see him come back and have an even better season, it’s exciting to see. ”

True to form, though, for Elko, this spring took a few turns. The Rebels climbed to No. 1 nationally, ranked by Baseball America and D1Baseball, in mid-March. Three weeks later, they were unranked.

“We may not have been good,” Bianco said, “but Tim never stopped hitting. At times, it seemed like he was putting us on his back to get here. ”

Ole Miss swept Missouri and ninth-ranked LSU in May, then finished the regular season with eight wins in 10 games before making a quick exit from the league tournament. A worrisome week of practices and intrasquad games came next. Ole Miss players and coaches operated as if their season would continue.

“We were trying to make sure everybody believed we were in (the tournament),” Elko said.

But they didn’t know. The Rebels gathered at the Dugout Club at Swayze Field to watch the selection show on Memorial Day.

“I had a little sick feeling in my stomach as we were waiting,” said senior left fielder Kevin Graham.

The postseason berth breathed new life into the Rebels.

In the regional at Miami, Ole Miss beat the host Hurricanes and twice toppled second-seeded Arizona – the team that eliminated the Rebels a year ago.

Of course, he did.

Despite the injury last year, Elko received offers to sign with MLB clubs. His decision to return, Bianco said, likely impacted Bench and Graham to make the same choice.

In Omaha, Elko has continued to do his thing.

“It feels amazing. That’s probably the most generic answer I could give, ”Elko said. “But we’re just playing our best baseball right now. Still got some games to win. I’m excited to keep that going. “

To reach the championship series, there’s one more hurdle to overcome. Arkansas beat the Rebels in the final two of three games in the regular season. And in 2019, the last time these programs battled in the postseason, Arkansas won the rubber match in a super regional to punch its ticket to the CWS.

“You could say that,” he said. “That’s the story that wants to be told.”