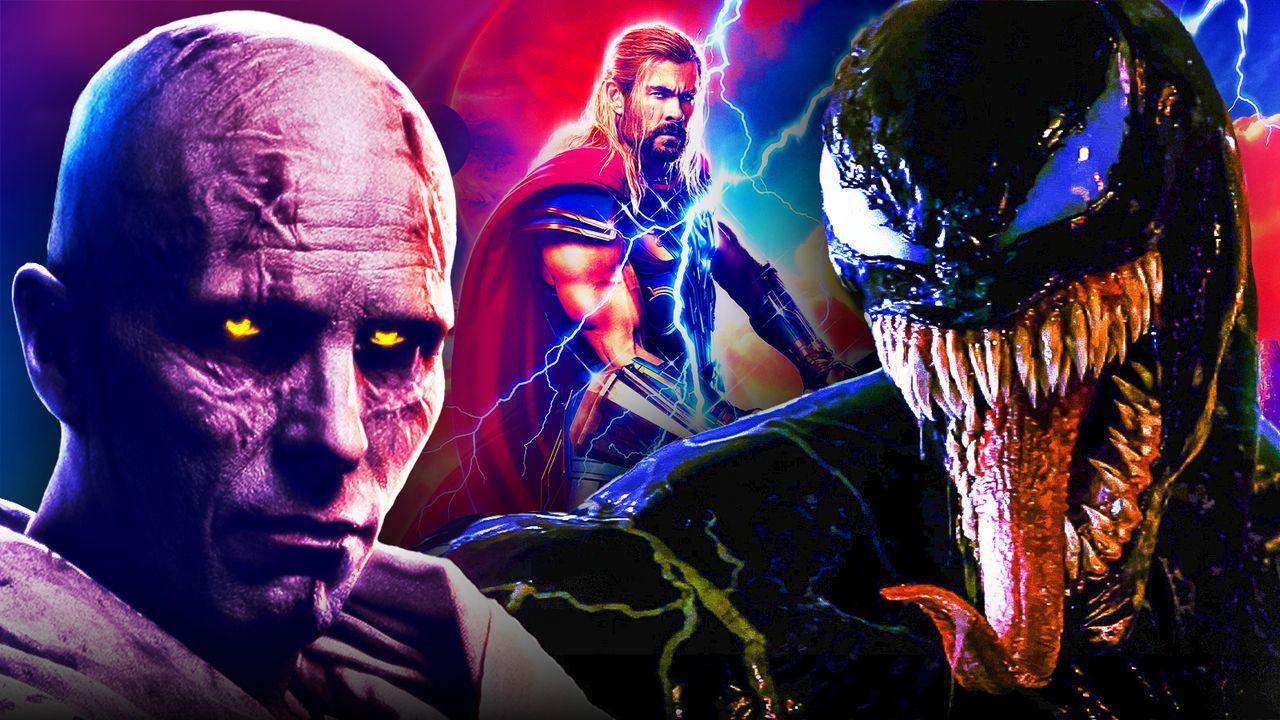 Many have been speculating endlessly about Gorr’s “terrifying” weapon that comes with his Marvel Legend’s toy figure for Thor: Love and Thunder, but fans of the comics know it as the Necrosword. Not only was this weapon powerful enough to keep up with Thor and every other god in the universe, but its origins were deeply connected to Venom and the symbiotes.

When Gorr and his signature sword debuted in the comics, fans weren’t any wiser about that lore. But, now, fans are discussing whether it would be possible for Marvel Studios to show the Necrosword’s elaborate backstory in Love and Thunder or if the sword’s symbiote-connected creator will be left a mystery.

How Gorr Found the Necrosword

To understand the Necrosword, one must know how Gorr came to possess it. Recently, it was said by Love and Thunderdirector Taika Waititi that Gorr is one of “The most sympathetic villains they’ve had,” so it wouldn’t be surprising if Gorr’s backstory in the film stays similar to the comics.

So, before being known as the Killer of Gods, Gorr was born on a planet with no name, living every day on the brink of starvation, and has been taught, since birth, always to honor the gods. These gods never answered a single of his prayers.

Even after his parents died from fever and beasts, even after the earth swallowed his pregnant wife, and even after all his children starved, Gorr was still expected to honor and cherish the gods. But Gorr could take no further loss and suffering when his last child died.

Gorr shouted to his tribe how there were no gods and how they could only depend on themselves. But, they did not wish to listen, calling him a blasphemer and exiling him to wander their desolate planet alone to die.

As Gorr crawled across the burning ground, wishing for death, something crashed into the planet not far from him. Investigating, Gorr found what appeared to be two gods, one in black armor and the other adorned in gold. While the one in black seemed to be dead, a spear through the head, the one in gold still lived and asked Gorr for help, which infuriated him, as the gods did not help him or his family during their desperate times.

As if reacting to Gorr’s burning hatred, the weapon of the god in black leaped towards Gorr, bounding itself to him. After Gorr had slain the pleading god with his new weapon, Gorr used it to leave his world, wondering to himself if there were more gods to kill.

But, unknown to readers, the god in black was not dead, and they would soon learn this god’s name to be Knull, the King in Black.

Between the destruction of the sixth iteration of the universe and the birth of the seventh, there was a deity who slumbered in a place called the Abyss, referred to by Asgard as the Ginnungagap. This was a realm of complete darkness that spawned countless beings of anti-life, Knull being one of them.

Eventually, the Celestials disturbed the Abyss when they began creating the universe, awakening Knull in the process. In retaliation for infringing on the Abyss, Knull decapitated one of the Celestials with ease before the rest pushed him back into the void.

Using the corpse of the Celestial left in the Abyss as a forge, Knull was able to craft a weapon with almost no equal: the All-Black. Leaving his void, Knull was able to bring untold destruction to the universe, killing any that stood in his way and embarking on a genocidal campaign against all gods and life itself.

In his pursuit, Knull finally met genuine opposition from an army of golden-clad gods using the power of the Light, his opposite. Knull was able to slay all but one, ending in both gods crash-landing in front of Gorr.

Incapacitated with a spear through his head, the All-Black abandoned Knull and attached itself to Gorr, who, like Knull, had the same burning hatred for all gods. But, unknown to Gorr, he had unwittingly continued Knull’s crusade across the universe, killing any gods he found.

It took centuries, but Knull eventually recovered from his injury and began to experiment with his powers, no longer having the All-Black sword to depend on. As a result of his experiments, symbiotes were created which Knull used to ravage whole worlds.

But, due to actions by Thor half a galaxy away, Knull’s connection to his Symbiotes was severed, causing them all to betray and imprison him. For millennia, Knull was put in a cage at the core of what would eventually be known as the homeworld of the symbiotes, Klyntar, until he would one day be set free.

In the meantime, Gorr continued to use Knull’s weapon to do what it did best: kill gods.

The Power of All-Black

While it was never named in Thor: RagnarokHela’s weapon was called “a” Necrosword by the Collector in the What If …? episode “What If … T’Challa Became a Star-Lord?” This indicated that there was at least more than one or that the blades spawned were merely copies of the original Necrosword.

However, Hela’s use of it was pretty limited, especially compared to the comics. The only abilities her Necrosword seemed to show were quickly spawning multiple copies of itself and changing its shape, like when Hela used it to craft an ax for Scurge to use as her executioner.

Otherwise, it seems pale in comparison to Gorr’s power, even what little fans have seen of him in the MCU.

Just looking at the marketing and merchandise for the Ragnarok sequel, it’s already apparent that Gorr’s weapon will act far more like its comic counterpart compared to Hela’s weapon. Not only can Gorr summon Black Berserkers, unlike Hela, who was forced to resurrect dead Asgardians, but it can also spawn defensive black tendrils too.

The second trailer for Love and Thunder appeared to show that Gorr was able to create a settle for himself, which is covered in black, slimy, symbiote-like tendrils.

As for the comics, the Necrosword instantly augmented its host’s strength, durability, speed, and reflexes to that of a god. So, while Hela herself was powerful, Gorr should be expected to display power beyond the Asgardian goddess of death.

As Knull would later create the symbiotes, like Venom, the All-Black is considered the first symbiote. It acted in much the same way as its modern counterparts, such as augmenting its host, changing its shape into different weapons or appendages, and even forming a suit around its host.

These are all abilities that Gorr regularly employed against the son of Odin as he attempted to kill him and other gods in the comics.

But, the most dangerous power the Necrosword possessed in the hands of Gorr was, as mentioned, the ability for him to amass an entire army. Similar to how Venom had spawned Carnage from its essence, the weapon was able to spawn its own semi-sentient symbiotes that followed the will of whoever wielded the sword.

So now the big question is: could Marvel Studios even use any of this backstory and lore?

By all accounts, Knull is a character primarily linked to Venom, who is a character directly tied to Spider-Man, meaning that Knull’s film rights are also tied to Sony Pictures. So Marvel Studios cannot legally make any direct references to that character without getting approval. Any hopes of the god of symbiotes being mentioned by Thor or anyone else should be put to rest now.

Long answer: Yes, but with caveats.

Marvel Studios could do everything but mention Knull or symbiotes since every crucial aspect of Gorr and the Necrosword was written and drawn before any connection to either was established. The MCU could go as far as hinting at the existence of Knull, but, again, just not naming or showing him.

Remember the Celestial that Knull beheaded using the All-Black? The decapitated head is what would eventually become Nowhere, which was a prominent location in Guardians of the Galaxy and Avengers: Infinity War.

Now, it’s likely that Love and Thunder could just give this terrifying feat to Gorr himself, but it could also be implied that someone else had killed the Celestial using the Necrosword. In fact, it’s quite possible that audiences could be shown Gorr’s backstory from the comics in its entirety without any changes.

After all, Knull is never named and his more commonly used character design in his later appearances wouldn’t be present either. So, theoretically, Marvel Studios could sneak Knull into a flashback and simply not address him.

In contrast, the basic design of symbiotes is so generic that Marvel Studios could tweak the design of the Black Berserkers to resemble them even more, but not so much that lawyers from Sony Pictures would come knocking. All Marvel Studios would need to do is give them white teeth, and, what do you know, you have creatures that look more like symbiotes, such as Venom, but can still be legally distinguishable from them.

It could even be a way for Marvel Studios to offer an olive branch to Sony Pictures down the line. No doubt they’ll have to negotiate a new contract before the next Spider-Man trilogy in the MCU, but perhaps it could include other characters, like Knull. But, if that falls through, it’s not like these clues to Knull would harm the MCU moving forward and can be ignored as just fun Easter eggs for fans.

Audiences will have to wait and find out how much Marvel Studios will lean on these connections to Knull when Thor: Love and Thunder hits theaters on July 8.