The TVLine Performers of the Week: Kaley Cuoco and Sharon Stone 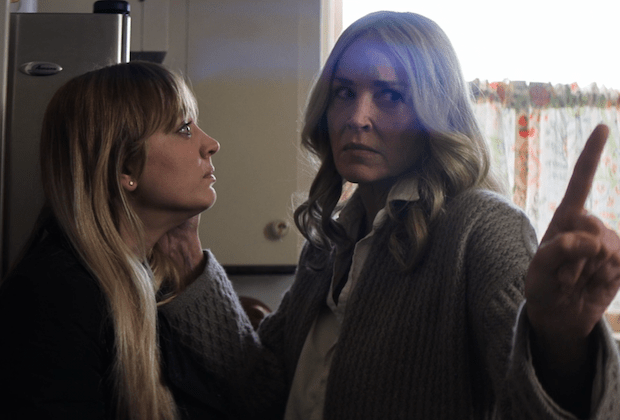 THE SHOW | The Flight Attendant

THE PERFORMANCE | Whereas last week’s episode was heartbreaking, given Cassie’s fall (s) off of the wagon, this week’s trip back home was devastatingas Cassie and her estranged mother endured a very unexpected, contentious reunion.

Ahead of said reunion, Cuoco had already delivered a raw, sorrowful reading of Cassie’s letter to her and Davey’s not-so-dearly departed dad – so we were already in her corner, hoping that any sort of “win” was coming. But when Lisa greeted her kids with a growled, “Jesus, Davey. You might have given me a heads-up, ”we knew another emotional ride was upon us.

Cassie did her best to set a genial tone, but all Lisa could talk about was how her daughter and her friends used to throw house parties and steal from her. “Now that we’re all caught up,” Lisa snarked, “what are we gonna talk about on our Christmas phone call?”

But much More catching-up was to be done, as mom and kids relocated to the kitchen and Cassie overheard Lisa bemoaning her presence. This is where Cuoco and Stone dove hard into the material at hand, poking at old, unhealed wounds and blurting out tough words.

“I am sorry for being as — ty daughter, especially after dad died. I was a dysfunctional, alcoholic teenager, ”Cassie admitted. When that sparked zero reaction, she added that “taking responsibility for my life and my actions is a big part of my journey now,” and apologized again for not being “kinder” as a kid.

“Is that it? Because if that is it, I don’t think we are addressing the issue here, ”Lisa said, as Stone crossed over to stand beside TR Knight’s Davey, giving the sense of an intervention. “Nobody’s mad at you for what you did when you were little” in the wake of the father’s drunk-driving demise. “It’s what you do as an adult that matters, ”Lisa asserted, before rattling off instances of Cassie’s crappy, grown-up antics. “You think an apology is just going to wax it all away!”

Throughout this dialogue, Stone made it clear that Lisa was armed for bear and had years of stuff to get off her chest. Cuoco in turn depicted Cassie as confused and wounded, someone who truly thought an “I’m sorry” would sanitize a sordid past.

Things got especially hairy as Lisa confirmed that her daughter was still no stranger to drink. Cassie contended that “it’s hard to turn it off,” and then tried to turn the tables and ask why it is that Davey, who actually moved away from home, got a free pass? “You’re supposed to grow and learn and move on, ”Lisa shot back.

Cassie acknowledged that “Dad made me feel special and not f – ked up” and that her time spent with him was “disappointed” Mom. “Thats horrible, and I’m sorry,” she offered again. When Cassie then asked what she has to do to prove she is getting better. Well, that set up Stone and Cuoco’s biggest gut-punch of a moment. Lisa cupped her sobbing daughter’s face to say, “Cassie, honey, I love you. I do. But I don’t like you. At all. ” And with a sweet pat on Cassie’s cheek that segued into a harsh slap, Lisa excused herself to “go to work,” leaving behind an apoplectic Cassie and capping a difficult-to-watch, yet gripping, nine-minute sequence.

HONORABLE MENTION | Jessica Biel’s powerful and layered performance as the titular character in Hulu’s Candy was convincing in spite of her Mrs. Roper wig and oversized glasses, not because of them. It was through these glasses that we saw The Sinner alum’s smiley mien morph with her homicidal character’s moods to reveal lust, guilt, deception, rebellion and eventually, blood-soaked volcanic rage. Why was Candy so angry? Was she splenetic because of restrictive societal mores, her husband’s sexism and neglect, or had Betty really tried to kill her? Sadly, when it comes to the real case, we will never know. Thanks to the portrayer’s five-part turn as an attention starved, suburban alpha mom, who wielded an ax to brutally murder her friend and free herself, Biel’s iteration of Candy is the most frightening fictional one to date. 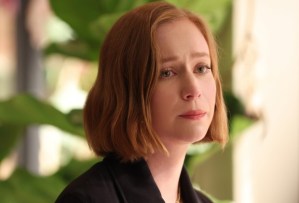 HONORABLE MENTION | In Episode 2 of Hacks‘Sophomore season, Ava Daniels walked on eggshells, tormented by the guilt she felt about her duplicitous deed. Hannah Einbinder exhibited a tornado of sentiments, vacillating between being an over-compensating “Yes Woman” and continuing her spiral of shame. When she finally came clean, the actress made us feel her character’s remorse with mournful eyes and body language – especially as her boss forced her to read the email out loud, word for excruciating word. In the final moments, Einbinder continued driving us through the emotional whiplash, as Deborah seemingly let her off the hook. But that sweet relief was merely a temporary balm: She then learned Deborah was suing her for breach of contract. While Ava certainly deserves whatever’s coming to her, it was Einbinder’s finesse that made it all so effective. 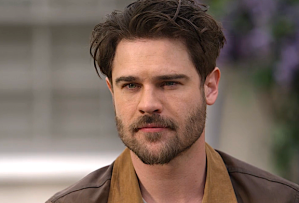 HONORABLE MENTION | We need only three words to describe our reaction to Gray Damon’s visceral performance in Thursday’s Station 19: We. Were. Gutted. The tour de force deserves more than three, however. Way more. After the episode started with him channeling Jack’s nervous excitement at the prospect of meeting the brother he’d never known he had, the actor conveyed in small gestures and tics his character’s disbelief and unspeakable hurt at learning that he had even more siblings, all of whom had been kept and raised by Mom and Dad. Later, Damon all but opened a vein as Jack unleashed his anguish at having been “passed from predator to predator” in foster care, all because his parents… “They didn’t want me,” he sobbed. Stunning work – raw, real and admirably vulnerable.

Which performance (s) knocked your socks off this week? Tell us in Comments!

Janice Shirey
Finland’s president initiated phone call with Putin to tell him the country is applying to join NATO
Will the 2022 Giants be THAT bad?