The Perfect Trade Knicks Must Offer Nets For Kyrie Irving 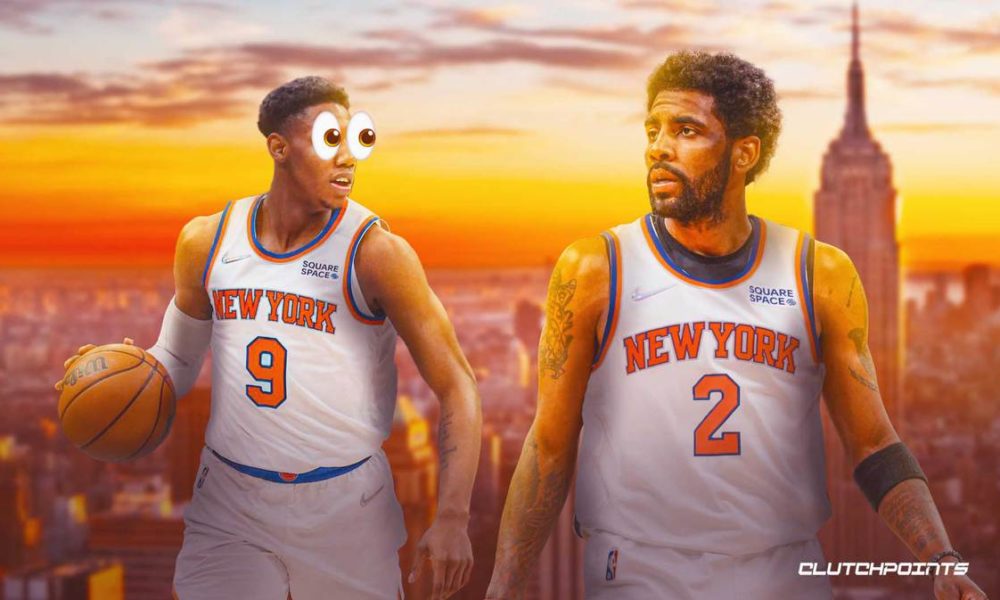 The Kyrie Irving saga continues to be written and looks to be one of the major storylines of the offseason. The seven-time all-star played in just 33 total games this season. His strong stance on the Covid-19 vaccine prevented him from playing alongside his teammates for the bulk of the year.

This absence prevented Brooklyn from ever finding a continuity or building team chemistry. Irving was in the final year of his contract with a $ 36.5 million player option on the table. The future of Kyrie Irving’s time with the Nets has become increasingly murky in recent days. The reported “impasse” that Irving and the Nets are currently at paints a negative feeling of his potential to return to the organization.

Kyrie Irving and the Nets are ‘at impasse’ that clears the way for him to test the open market, per ShamsCharania

The Lakers and Knicks are expected to be suitors pic.twitter.com/LnAgFks2yB

While Kyrie Irving is free to sign with any team he wants, it is unclear what the market currently looks like for the 30-year-old. While it is likely at least one team opens up their paychecks now, it could prove to be a smarter move for Irving to work with the Nets to find his destination. Opting into his player option and participating in a sign-and-trade would certainly be in the Nets’ best interest. It would also allow Kyrie to have a “prove-it” year and cash out next offseason which could set him up for the best potential paycheck.

Unsurprisingly the New York Knicks have quickly brought their name into the conversation. Their quest to land a superstar has yet to be fulfilled and Irving is surely the next name on their mind. Since the franchise has been unable to establish itself as the desired destination it has hoped to be, making a trade may be the best route. The Nets’ price tag for Irving is certainly lowered due to his ability to freely walk in free agency. Here is a trade that may work for both New York teams, with the Hawks getting involved as well.

The perfect trade Knicks must offer Nets for Kyrie Irving

Trading for Kyrie Irving would finally give the Knicks the superstar they desire. Holding onto RJ Barrett would be crucial to the Knicks being willing to do this deal. The duo of Irving and Barrett would be a nice core to carry the scoring load with a decent collection of role players around them. There would still be plenty of work to do on the rest of this roster but Irving’s addition massively improves the franchise’s chances.

The Knicks would also be given a chance to move on from Julius Randle. The 27-year-old has been unable to be the superstar they desired after his impressive 2020-21 season. Immanuel Quickly and Obi Toppin are each fine young players, but neither possess remotely the potential of the player Kyrie Irving currently is. New York would also add high-flyer Josh Colline to fill Randle’s role. Collins does not possess any of the shot creation of Randle but is a solid complimentary piece.

Walking away with two quality young players and two solid shooting role players would be a solid haul for the Nets. Brooklyn still has several questions to answer regarding their roster this offseason. They currently have just six players on the books for next season. It is also unclear what Kevin Durant’s outlook on the Nets would be if Irving truly leaves. This haul of pieces could either be looked at as a retooling or additional assets for a bigger move. As long as Durant remains faithful the franchise must be focused on contending. Flipping Toppin and Quickly for a more win-now player would certainly be a possibility.

The Atlanta Hawks have been connected to quite a few rumors already this offseason. They appear determined to find a true co-star to pair with Trae Young. While Julius Randle is not the perfect player, he would be the second-best player Young has played with by a pretty large margin. Pairing Trae Young with a shot-creating forward should be the Hawks’ number one goal. They have been rumored to be looking to move on from John Collins for quite some time. Randle would be a notable upgrade and fit the current roster much better.

This feels like an exchange of misfitting parts but one that puts each franchise in a better position. It will be interesting to see how the Kyrie Irving storyline plays out this offseason. The Knicks are surely a team set to give their best effort to land the guard. While the Knicks can potentially clear cap space to sign him outright, making a trade would secure the destination. Piecing together this offer would be New York’s best chance of landing the superstar.