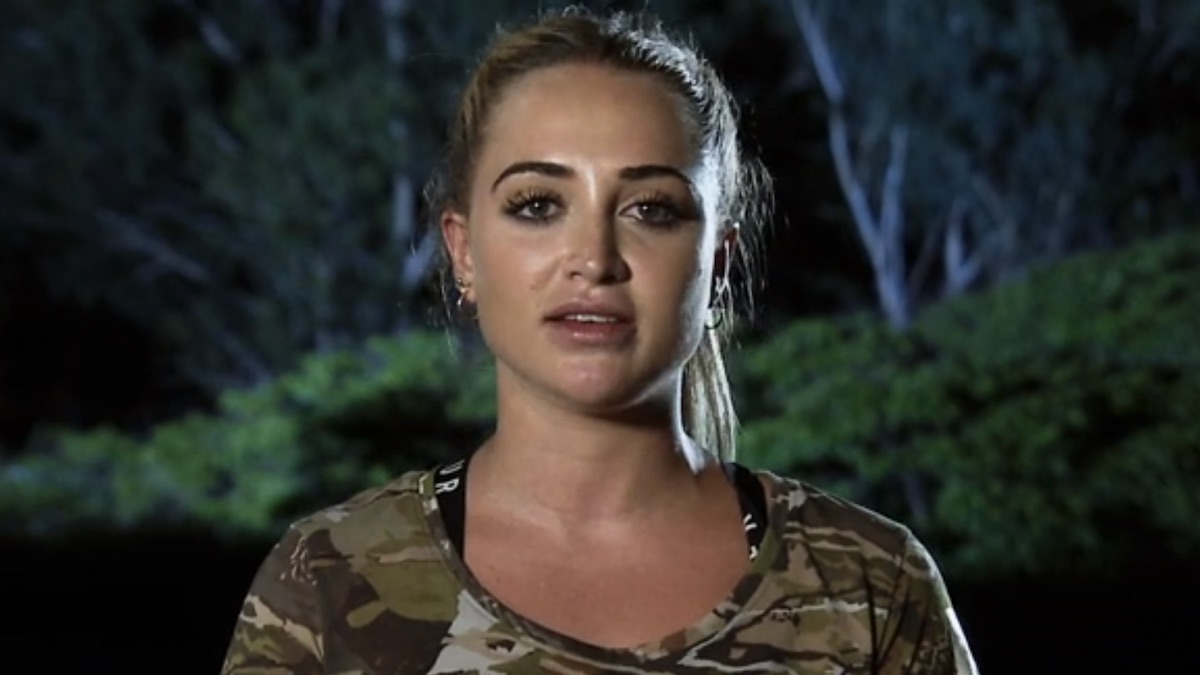 Georgia Harrison, a former finalist on MTV’s The Challenge, presented a delicious thirst trap as she tempted fans and followers with what is likely many people’s all-time favorite food. Some might even choose it as their everyday meal if they had to make such a choice.

The 27-year-old UK star, who rose to fame with Love Island UK 3, has been away from the competition series for three seasons and keeps fans wondering if she might ever return.

While not appearing on TV, she’s appearing in various posts on her social media, including the recent share featuring food and part of her red bikini.

The Challenge’s Georgia poses in red bikini with pizza

Laying in a provocative pose next to a box featuring one huge pizza, former War of the Worlds finalist Georgia Harrison enjoys another slice of the pie.

In the Instagram photo, she has one arm outstretched and out of the frame with her hair in a mess on the floor. Georgia wears a baggy black t-shirt pulled up slightly, revealing her tan midsection and legs with red bikini bottoms.

In the photo, she’s about to devour some more of the large cheese pizza. She gave her fans and followers a question to ponder in the caption.

“You want a pizza?” Her IG post’s caption reads, playing on the trash-talking phrase, “You want a piece of me?”

Despite having what appears to be several slices of that enormous pizza, Georgia seems to still be in tremendous shape, which could bode well for her if she ever returns for The Challenge.

Her food and thirst trap brought in nearly 15,00 Likes and over 250 comments from many fans and followers who seemed interested in a slice or wanted to heap some praise on the UK reality TV star.

“Omg, you are something else 🤤 so stunning,” a fan wrote in reacting to Georgia’s IG post.

Another of Georgia’s commenters wondered if they’d died and gone to heaven based on seeing Georgia and that delicious pizza in the same photo.

“Geez, you may be the most beautiful women ever Georgia ❤️❤️😍😍😍 please come back to the Challenge,” another follower wrote in Georgia’s comments.

Georgia debuted on MTV’s The Challenge: War of the Worlds season, where she was amongst the show’s finalists. Unfortunately, she and castmate Mattie Lynn Breaux both ended up withdrawing due to the intense conditions of the final.

Georgia returned in the follow-up season, War of the Worlds 2, and proved successful in her first two eliminations, sending home Esther Falana and Tula “Big T” Fazakerley. However, she went up against Tori Deal in Episode 10 and lost in the Blockbuster event at the Proving Ground.

It’s unknown if Georgia will return for another season of The Challenge, as she appeared in a controversial photo that surfaced online years ago. She may also be involved in the upcoming trial involving ex-boyfriend Stephen Bear. That may take place this December, according to UK’s Mirror.