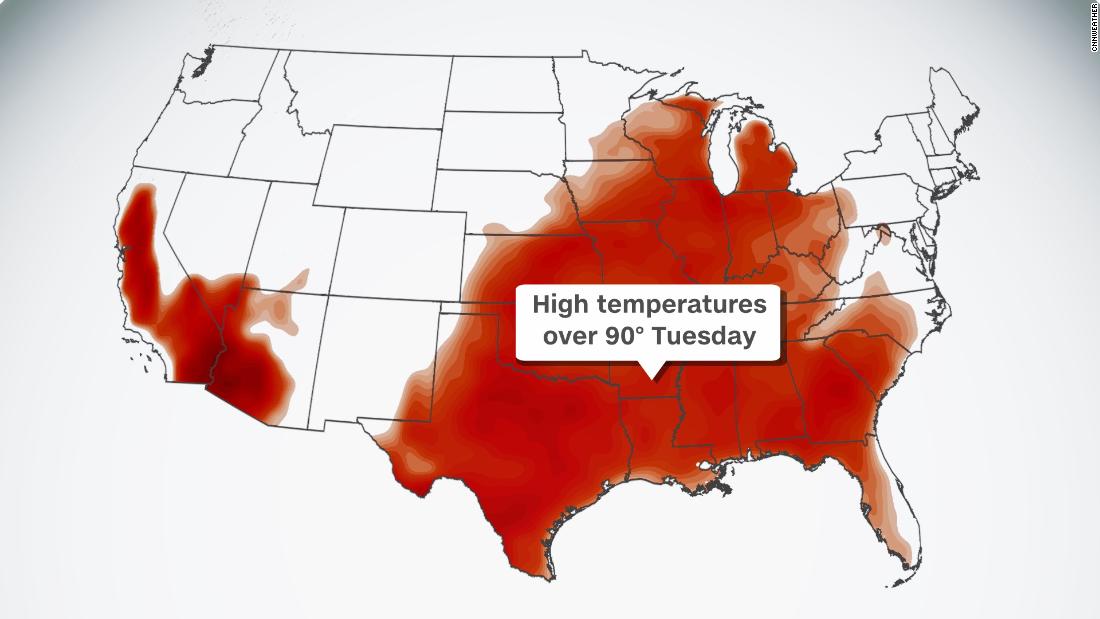 In the Great Lakes area Tuesday, highs will be 15-25 degrees above normal, and California will see triple-digits on thermometers from Fresno in the San Joaquin Valley to Redding in the north.

Over the next few days, the center of heat will shift over the South and Southeast, from Texas to Georgia, and numerous cities are likely to face triple-digit temperatures, including Dallas, Houston, New Orleans, Memphis, Nashville and Atlanta.

More than 70% of the US population will see a high above 90 degrees over the next seven days, and 20% will see highs top 100 degrees.

Monday brought record high temperatures for cities in the central US, including multiple records set in Texas. Both Houston and Victoria, Texas, and St. Cloud, Missouri, topped their previous records with highs of 101 degrees.

That’s after an enormous heat dome across the eastern US and the Midwest created record high temperatures in several cities last week – and intensified the misery for some communities that were already battling power outages following a series of severe storms.

The extreme heat conditions can be detrimental to a person’s health, especially for the elderly, children and those who experience chronic illnesses or mental health problems.

Heat wave is “Super Bowl” of energy use for power companies

Earlier this year, US power regulator NERC warned that extreme temperatures and other environmental factors could cause power grid failures across vast portions of the country this summer.

In anticipation, power companies across the Southeast say they are preparing for the additional strain that will come when droves of heat-stricken people retreat indoors for air conditioning relief.

“This is our ‘Super Bowl’ that we prepare all year for,” Tennessee Valley Authority (TVA) spokesman Scott Fiedler said in a statement to CNN. “TVA is extremely well-positioned to meet power demand during this week’s hot weather. As you know, temperature and load go hand in hand. So we should see high loads the rest of this week.”

Last week’s power demand was record-setting for TVA, which saw over 31,000 megawatts used on Thursday, just days after surpassing the 31,000 megawatt mark on June 13, Fiedler said.

Both Georgia Power and Duke Energy Carolinas, which serve markets in North Carolina and South Carolina, said they are prepared for the increased demand the blistering temperatures will bring.

Duke Energy Carolinas saw a record summer usage of 21,000 megawatt-hours of electricity on June 13, eclipsing its previous summer record set in July 2016, the company said in a release.

Duke Energy Process, the company’s other Carolina utility, did not break any records, but the two companies combined had a peak usage record of 34,079 megawatt hours, besting the old record set in July 2020, the release said.

Entergy, which services parts of Arkansas, Louisiana, Mississippi, New Orleans, and Texas, said the company is expecting to see unprecedented levels of energy usage this week.

“We have a detailed plan for extreme hot weather, which includes our power plants and transmission operators taking steps to maintain the balance of supply and demand on the grid and actions to reduce the risk of generation or transmission facilities tripping offline,” the Entergy news release said.