State of the Packers Roster Following the Draft 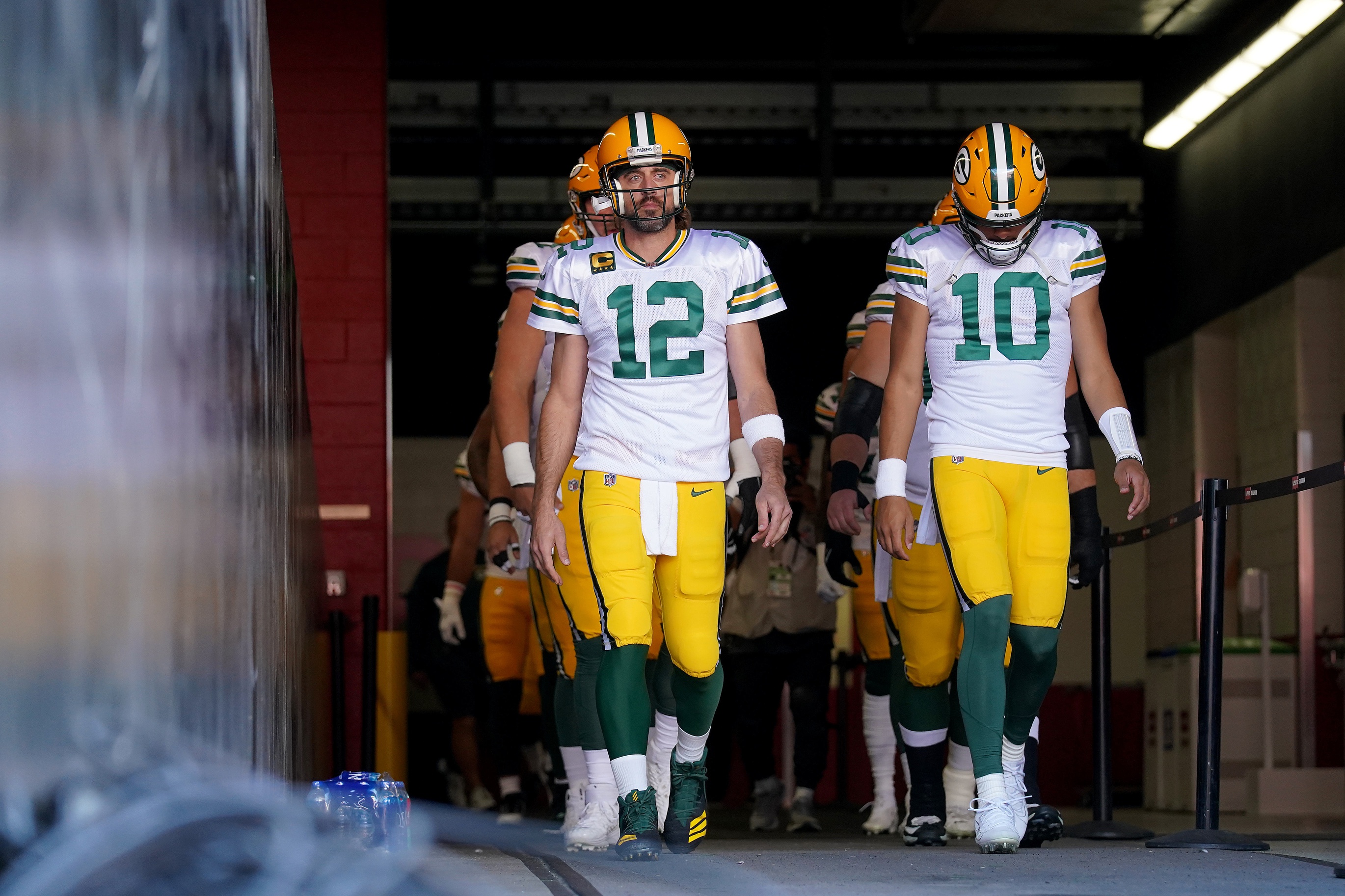 Free agency has been at a crawl, the draft is over, undrafted rookies have been signed, and the roster is set at the maximum of 90 players – although that can change quickly, as we’ve seen over the last few days with the Green Bay Packers signing Kobe Jones and Eli Wolf while releasing Chris Blair.

So with the roster now somewhat stable, I thought this would be as good of a time as any to take a position by position look at this Green Bay Packers team, while of course, providing my thoughts along the way.

Unlike this time a year ago, we know what the quarterback room is going to look like. It’s going to be Rodgers and Love – so obviously, that means I don’t see Love getting traded this season. Now, that doesn’t mean he’s off limits by any means – I just don’t believe that Green Bay will get the offer they’re looking for.

Jones and Dillon will make up one of, if not the best, running back duo in football; However, beyond those two, the Packers will have some decisions to make. If Kylin Hill is ready to go for Week 1, I would consider him the front-runner for RB3, and it would also be interesting to see if Green Bay decides to roster three running backs or four.

I love Taylor’s fit for this offense as he is tailormade – pun intended – for Matt LaFleur’s system, but UDFA Tyler Goodson will be a name to watch this summer.

Did the Packers do enough at the receiver position this offseason? Ultimately, we will have to wait to find out, but in an attempt to answer the question, there is going to need to be a heavier reliance on LaFleur’s system to scheme players open, and Green Bay is going to need Rodgers to play the like the back-to-back MVP, who can elevate this group. The defense and run game will also have to play larger roles as well. So with that caveat, yes, I believe the Packers can win playoff games with this group.

Prior to the draft, LaFleur mentioned that this offense needed more speed and playmaking ability, which they certainly added with Watson, Doubs, and Toure. The big question right now is, who is going to be the guy that can pick up seven yards on third and six?

There are rumors of the Packers having reported interest in free agents Julio Jones, Odell Beckham, and Jarvis Landry, but I still remain skeptical. For starters, it’s going to require one of these players signing a somewhat team-friendly deal given the Packers’ cap situation, and when it comes to roster space, it’s not as if there is a ton of space as I would consider Watkins (as long as he’s healthy), Cobb, Lazard, Watson, Rodgers, and Doubs locks – although they could certainly decide to keep seven receivers instead of the usual six.

I’ll also point out that Jones has missed 13 games the last two seasons and may be out of Green Bay’s price range. We don’t know when Beckham will return, and this is his second ACL injury since 2020. Meanwhile, Landry’s skill-set is a bit similar to that of Cobb and Rodgers. These are just a few more reasons why I remain skeptical, but Gutey has certainly thrown us a few curveballs over the last couple of years as well.

Eight tight ends seems like quite a few to be heading into training camp with, and this is another position where some difficult decisions will have to be made. Whenever Tonyan is available, Green Bay is going to have to decide between keeping four or five tight ends. Tonyan, Deguara, and Lewis will be on the team, while Dafney could become a core special teams player under Rich Bisaccia and Gutey just spoke quite highly of Davis following the draft.

The competition along the offensive line this summer just got kicked up a few notches with the additions of Rhyan and Tom – both of whom could compete with Nijman at right tackle as well as at both guard positions, with Tom also able to play center.

If Jenkins begins the season on the PUP list, the only spot along the offensive line that I would sharpie in for Week 1 is Bakhtiari at left tackle with Runyan and Myers penciled in. Otherwise, I imagine LaFleur is going to move players around this summer and let the competition unfold as he tries to find the best combination of five to put on the field.

This has to be one of the more straight forward positions on the roster, with the defensive line rotation being made up of Clark, Slaton, Wyatt, Lowry, and Reed. The only real question is, do the Packers keep five interior defensive linemen or six?

And, yes, I’m aware that the Packers can save 5.9 million by cutting Lowry after June 1st, but I don’t see that happening.

When speaking with reporters earlier this offseason, OLB coach Jason Rebrovich said he wants a consistent rotation of four players every week – not to mention that Green Bay may end up rostering five edge rushers on the 53-man. Well, we know who two of those spots belong to, but the other 2-3 are very much up for grabs.

Bringing in a veteran edge rusher could still be very much on Gutekunst’s offseason to-do list.

With the addition of Walker, we are going to see much more two-linebacker sets from the Packers, which is also going to better allow them to disguise what they are doing defensively. When Barnes was on the field, it was fairly clear that they were more so playing the run, and with Black as the third safety, they were playing the pass. But now, it’s going to be more difficult for opposing offenses to decipher what’s taking place with Campbell and Walker’s versatile skill-sets.

After those two, if the Packers choose to keep five linebackers as they did in 2021, Barnes, McDuffie, and Carpenter all could play key roles on special teams. And although Carpenter is listed as a safety, following the draft, LaFleur mentioned that he is going to be spending his time in the linebacker room.

As good as Alexander, Douglas, and Stokes can be, there are equally the same amount of question marks on the depth chart behind them. The rest of the cornerback room brings very little NFL experience, and another question I have is, who is going to play in the slot when Alexander is on the boundary? Again, there is just very little experience there on this roster.

While Alexander may finish the season with the most slot snaps, it’s not as if he is going to spend all of his time there either – rather, he is going to move around with the opponent’s top receiver. And if you want another UDFA name to watch this summer, Texada is another player who will be on my radar.

Along with edge rusher, this is another position that I wouldn’t be surprised to see the Packers still add to in free agency.

Safety is similar to cornerback in that the depth chart behind Amos and Savage is quite inexperienced. In fact, if you total up the NFL snaps for Davis, Gaines, Scott, and Sterling, they total 90 – all of which belong to Scott. So this is another position group with a few roster spots up for grabs, although, as I already alluded to, with the addition of Walker at linebacker, I expect that we see three safeties on the field a lot less often.

O’Donnell signed a two-year deal, so he is going to be on the roster and, from the sounds of it, should be an upgrade over Corey Bojorquez as a holder. I would like to see some competition at long-snapper, but that may not be the case with only Wirtel on the roster. Lastly, I do expect there to be some level of competition this summer at kicker, but Crosby is going to win out.

It’s also important to note that when Bisaccia met with reporters, he would mention that he expects to enter training camp with only two kickers – so a cut could be coming before then, which would also open up a roster spot as well.

Ernesto Castro
The Blacklist Season 9 Episode 20 Review: Caelum Bank
Actress Andie MacDowell fell to her knees after suffering a Trump-induced panic attack on set when she saw a ‘sea of men’