Star Trek: Strange New Worlds “Momento Mori” was written by Davy Perez (Supernatural, American Crime) and Beau DeMayo (Moon Night, The Witcher, The Originals) and was directed by Dan Liu, whose other credits include Kung Fu, Shadow and Bone and The Walking Dead. We get to see Pike (Anson Mount) leading in a crisis, inspiring and leading his team. Pike demonstrates his tactical savvy too. It was great to see some real action on the bridge, including a shot of Spock (Ethan Peck) diving to look into that senso-thingy on his console.

The Enterprise is attempting to deliver some equipment to a Federation colony on their version of Memorial Day – they wear pins to commemorate previous postings and fallen comrades. Cadet Uhura (Celia Rose Gooding) is doing a rotation in engineering with the extremely demanding Hemmer (Bruce Horak) – and they are terrific together as she slowly but surely wins him over. 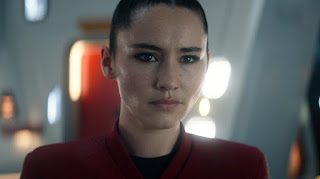 The Enterprise quickly learn that the colony has been attacked by the Gorn – who then turn the attack on the Enterprise. I was really curious to SEE the Gorn – lets face it the TOS episode with Kirk going mano-a-mano with the Gorn is a classic but the Gorn costume left a lot to be desired… Naturally, it’s La’an (Christina Chong) who sounds the alarm to give the Enterprise a chance and urges Pike to run. I could have done without her seeing the ghost of her brother – Manu (Cameron Roberts) – all episode.

Pike takes them into a brown dwarf hiding a giant black hole. I love how Pike just tolerates Ortegas’s (Melissa Navia) sarcastic – and hysterically funny – remarks. Meanwhile, Sick Bay and the cargo bay are hit. Una (Rebecca Romijn) is badly hurt and of course M’Benga (Babs Olusanmokun) and Chapel (Jess Bush) have to resort to “barbaric” methods to help save her. Hemmer and Uhura are injured and trapped in the cargo bay. Uhura has to get loner Hemmer to act as a team – she’s fantastic – and Hemmer isn’t actually a bad teacher.

La’an is temporarily back to being Number One – and Pike has to give her a pep talk about leadership – regardless of her past and what she might feel – she has to give the crew hope. Pike himself has to make some really hard choices – like sealing the bulkheads. Spock tells Pike it was the logical choice when Pike is clearly devastated by losing a crew member, and Spock tells him the decision was made to save lives. Luckily, the pressure that started to collapse the Enterprise decks destroys the Gorn ship. 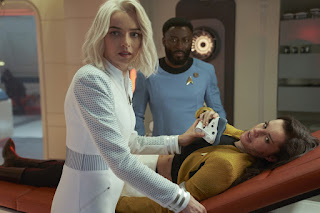 One, of course, needs an operation. Chapel is hysterical when she tells her “it’s like giving birth out of your mouth” – clearly Chapel and Ortegas went to the same charm school – seriously, though, I need these two to have some scenes together! When there’s only on the bag of plasma left, Una orders them to give it to another crew member.

Another great scene was La’an complaining that Spock never spoke in plain English – and Peck is fabulous as he turns a truly Spock-withering look on her and gives it to her straight. When La’an offers to pilot a likely suicide mission on a shuttle, Spock doesn’t hesitate to volunteer as her back up. I’m not really clear on how the shuttle isn’t crushed, but we’ll just hand wave that 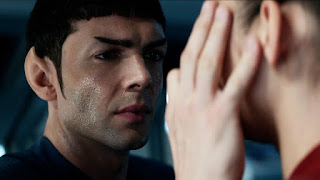 Seeing the Gorn ships flashing lights at each other, La’an knows she’s seen it before, but she doesn’t know what it means. She asks Spock to mind-meld with her to release the memories. He hesitates, but eventually we get the iconic “my mind to your mind”. She remembers that they were brought to a breeding colony to be food for the Gorn hatchlings. Her brother gives her a book that decodes the light signals. While melded, La’an also picks up on Spock’s memories of HIS sister who also sacrificed herself for him – nice shout out to Discovery!

La’an gets a lot of satisfaction by telling the mothership that the smaller one has been boarded and taken over by humans, leading the mothership to destroy the smaller – they don’t tolerate weakness! This is really nicely juxtaposed by Hemmer confiding in Uhura that he wanted to be a botanist because he loves flora. But he also tells her that he won’t fight for Starfleet but he will defend its ideals – he is a pacifist but that doesn’t mean you are passive. Uhura points out that that is a matter of perspective. They have been unsuccessful in their repairs, and Hemmer tells Uhura they have to vent the entire bay into space.

I loved that Pike uses folksy wisdom about ‘possums AND his knowledge of battle to come up with a plan. I also liked Spock telling him his plan was “mathematically” possible. When Ortegas questions whether the compromised ship’s hull will hold under this increased strain, Pike demonstrates how to give the crew hope with his own conviction. La’an is paying attention and completely supports his assertion that the Enterprise will hold. 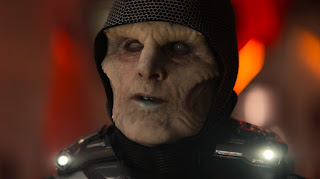 We get another great scene with Hemming and Uhura as they strap in to try to survive venting the cargo bay. Hemming concedes that she has impressed him and he’s going to give her high marks. He steadies his shaking hand and tells her humans worry too much about death. His race believes the end only comes once you have fulfilled your purpose. He tells her his was “to fix what was broken” and clearly this means not just the things in engineering but the strain between his race and the federation. She tells him to add teaching and being inspiring. Uhura doesn’t know what her purpose is and takes hope that means she isn’t going to die! 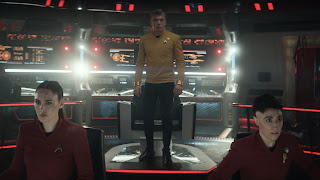 Pike gives the requisite inspiring speech to the crew before telling them to brace for impact and heading towards the black hole. The Gorn ship follows them until it sees the explosion and then leaves. They tease us with a blurry picture from the cargo bay and a delay in answering them – but we know that Uhura isn’t going to be dead. Again, my one criticism of Peck as Spock is that he smiles a bit too much – but perhaps that’s because he’s still mastering his human side?

This was another feel good episode that again closely mirrored the feel of TOS. I think some of the “clunky” feeling – cliched? – dialogue is attributable to that feel of nostalgia. We get a lot more insight into the characters, especially Hemmer and La’an. Uhura, Ortega, and Chapel need to become friends – and go off on a mission together – just a thought… What did you think of this week’s episode? Are you developing a favorite character? Let me know your thoughts in the comments below!