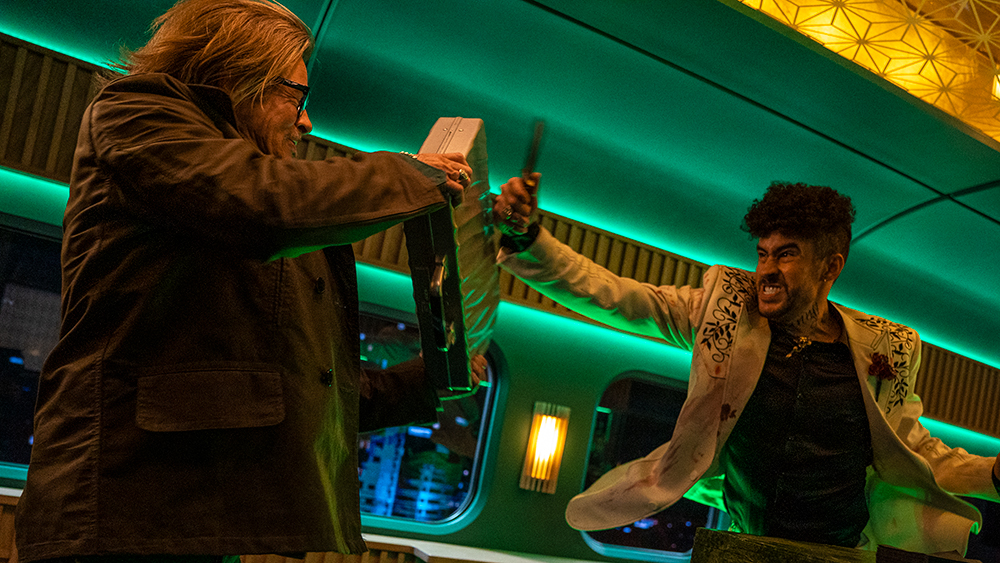 Sony made a splash at the CineEurope conference in Barcelona with British star Aaron Taylor-Johnson on the ground to tease David Leitch’s “Bullet Train,” in which Taylor-Johnson stars opposite Brad Pitt, Sandra Bullock and Karen Fukuhara. Taylor-Johnson, who just wrapped up the shoot of “Kraven the Hunter,” introduced 15 minutes of footage of the action-packed comedy thriller “Bullet Train,” which was also shown at CinemaCon.

“I watched (the movie) last week and I was literally howling with laughter to the point that I almost peed on my seat a little. But honestly, this is the summer movie you don’t want to miss – I am not kidding, “said Taylor-Johnson. It follows the ultimate legend Brad Pitt like you’ve never seen him before, surrounded by an incredible ensemble of absolutely bombastic, unhinged assassins who are connected but with conflicting agendas. You just can’t help but love Brad Pitt. I mean, he is the most handsome man in the world, but is also a comic genius, ”he continued.

Based on Kotaro Isaka’s book, “Bullet Train” stars Pitt stars as Ladybug, an unlucky but highly gifted assassin whose latest mission puts him on the world’s fastest bullet train in Japan along with other assassins from around the globe.

Taylor-Johnson said he and everyone involved in the film was “100% committed to the cinematic experience. We were making this film during the height of the pandemic (so) we have high hopes that it would one day be seen on the big screen, the way it should be, ”said the actor. The movie hits theaters on Aug. 5.

Taylor Johnson also spoke about his experience shooting “Kraven the Hunter,” who he described as “one of Marvel’s most iconic, notorious anti-heroes – Spider-Man’s number one rival.” He said he found exciting the fact that this character is “not an alien, or a wizard.” He’s just a hunter, a human with conviction. An animal lover and a protector of the natural world. He’s a very, very cool character. ” He added that unlike other Marvel movies, “this one is shot entirely on location.”

Steven O’Dell, president of international releasing at Sony Pictures, said “Bullet Train” illustrates the studio’s “strong belief in the viability of originality,” which he said complements its output of franchise-based blockbusters and sequels, from “Spider-Man. : Across the Spider-Verse “to” El Muerto “and the next installments of” Ghostbuster “and” Venom. “

He said during the last eight months, Sony showed that “theatrical is alive and profitable” and during the next few months, it will show that “new and original stories are essential and they work.”

During its presentation at CineEurope, Sony also unveiled an exclusive clip of Will Speck and Josh Gordon’s “Lyle, Lyle, Crocodile” starring Spanish star Javier Bardem as Héctor P. Valenti and featuring the voice of pop star Shawn Mendes as Lyle, along with Constance. Wu and Winslow Fegley. Based on the bestselling children’s book by Bernard Waber, the musical comedy centers on the title reptile who has an extraordinary singing talent and lives with the Primm family in a New York City house.

“This is a movie that I don’t think is on your radar yet, but I think it will be after today and it needs to be. While it’s based on a popular children’s book, the real magic to this film lies in what defines a big family co-viewing event: a high concept film, full of laughter, infectious joy, emotion, and of course amazing special effects, ”said O’Dell.

In his introduction, O’Dell said Sony had two goals when it put together what he described as the studio’s “most ambitious six-month slate ever” the fall and winter. “The first was to make sure that we kept audiences in the habit of going to the movies, the second was to support its deep belief that audiences love the social movie experience enough to overcome great obstacles,” he added, insisting on the importance of “A clear theatrical window,” arguing that it “indeed matters,” which drew applause from the crowd of exhibitors and distributors. He said Sony’s strategy paid off as it broke its own record with 3 billion at the global box office.

Also in Sony’s pipeline is “Where The Crawdads Sing,” a female-driven thriller based Delia Owens’ bestselling 2018 novel, executive produced by Reese Witherspoon. At CineEurope, Sony also showed a trailer for “The Woman King,” among other highlights.