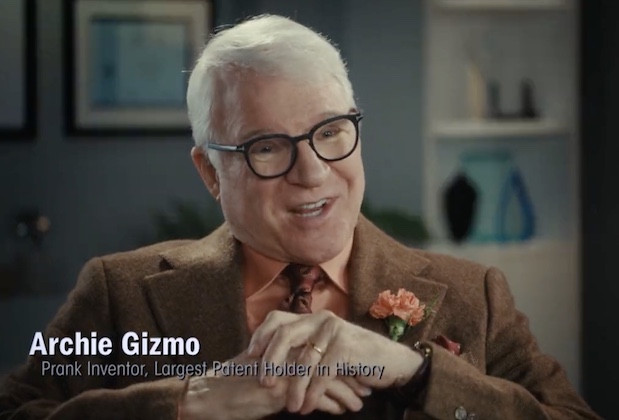 A pair of Only Murders stars were in the building – Rockefeller Center’s Studio 8H, that is – when Steve Martin joined Saturday Night Live host Selena Gomez for a pre-taped bit.

In an episode of a PBS-type series called American Inventors, Gomez served as host Taylor Gosh, who introduced a profile of Archie Gizmo, the inventor of the infamous Whoopie Cushion. Cue Steve Martin’s appearance in a separately taped segment that elicited cheers from the studio audience watching.

Billed as “Prank Inventor,” Martin’s Gizmo proceeds to relate the story of how he arrived at the design for the Whoopie Cushion but had a dickens of a time deciding on the noise it should emit – that is, until he spotted Dina Beans (played by Aidy Bryant) from across the room at a party, and was an ear-witness to the gas she loudly passed every time she sat down.

The Whoopie Cushion, though, would not be the only gag for which Dina served as Archie’s muse. There was that time she happened to open a can of nuts that most unfortunately had been infested with four real, colorful snakes that sprang out. Dina also had an alarming propensity to get struck by lightning when she’d shake someone’s hand… reach for a stick of chewing gum offered from a pack… or use a ballpoint pen.

Watch Gomez and Martin’s American Inventors segment below, then weigh in and grade this season’s penultimate episode.

an inventor and his muse pic.twitter.com/miSv6cWXyG