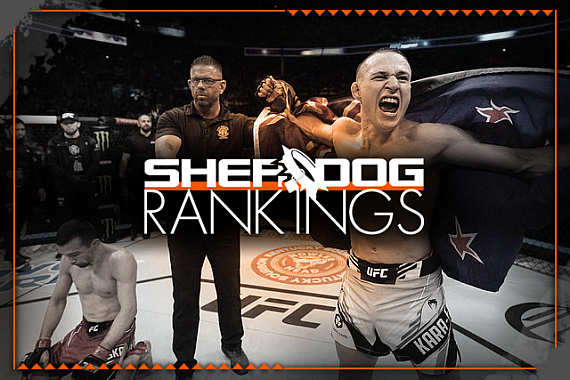 The landscape of the flyweight division – for both men and women – changed significantly at UFC on ESPN 33.

Kai Kara France struck the biggest blow of the evening, as he outpointed the previously unbeaten Askar Askarov in a featured 125-pound affair at the Nationwide Arena in Columbus, Ohio, on Saturday. The City Kickboxing product earned his third straight triumph in UFC competition and might have solidified himself as the division’s No. 1 contender in waiting. In the meantime, he rises from ninth to third in Sherdog’s divisional rankings, while Askarov drops to No. 4.

Elsewhere, Matheus Nicolau ended David Dvorak’s 16-bout professional winning streak in another flyweight bout at UFC on ESPN 33, which allows him to rise from 15th to 10th in the rankings at 125 pounds – one spot ahead of the man he defeated. Nicolau’s rise is buoyed further by the departure of Joseph Benavidez, who exits the rankings and vacates the No. 5 spot, as it has now been a year since the former two-time title challenger declared his retirement.

On the women’s side, the new guard at flyweight ruled the day at UFC on ESPN 33, as surging Frenchwoman Manon Fiorot vanquished ex-title challenger Jennifer Maia, while former strawweight Alexa Grasso tapped out Joanne Wood. As a result, Fiorot joins the women’s 125-pound poll at No. 10, with Grasso slotting in just behind her at 11th.

There was also some significant action at 115 pounds at One Championship “X” over the weekend. Angela Lee submitted No. 15 Nong Stamp in the evening’s main event, which allows Lee to make her debut in the rankings at No. 14, while Seo Hee Ham’s victory against Denice Zamboanga allows her to move to No. 13. We also bid farewell to Nina Nunes, who does not have a strawweight victory since December 2018.