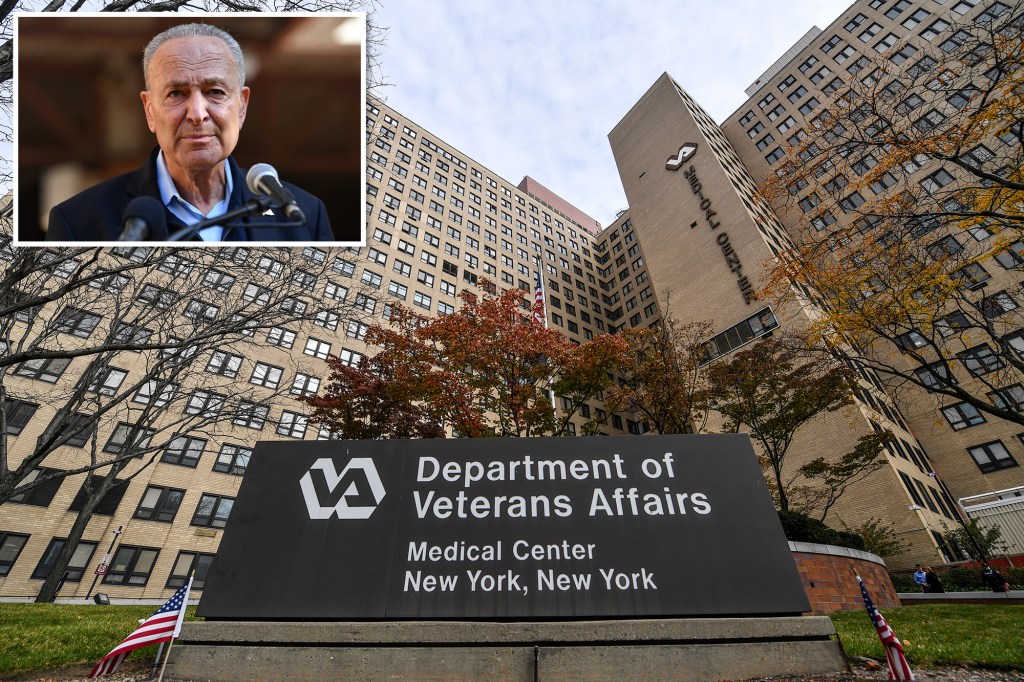 Schumer (D-NY) announced he is starting a petition drive in the five boroughs in opposition to the Federal Department of Veteran Affairs preparing to close two of Big Apple’s three local VA hospitals.

“We are going to fight this proposal tooth and nail. We are going to put a dagger through its heart, and it’s not going to see the light of day, ”he said at a Sunday morning press conference, while flanked by war veterans and elected officials in front of a Veterans Administration hospital in Manhattan.

“These are the people who risked their lives for us, and the only thing we said in return is, ‘You’ll get good healthcare.’ These facilities give good healthcare, ”he added. “We’re not going to take them away.

“Who is going to take care of them? We are not going to turn our back on these veterans, plain and simple. “

About 210,000 military veterans live in the five boroughs, according to the city Department of Veterans’ Services.

The VA blueprint, first reported by The Post earlier this month, says it would be “discontinuing” services at the Brooklyn VA site, and instead establish a strategic collaboration with another provider to deliver inpatient medical and surgical and emergency department services. The proposal would also close the Manhattan VA hospital and develop a new “urgent care center” with another provider.

The Brooklyn VA hospital is located in Bay Ridge and the Manhattan one is at 423 E. 23rd St. adjacent to Bellevue Hospital. A third VA medical center is located in The Bronx, but the facility there would not be affected by the potential change.

Schumer promised not to allow the federal government to follow through with its plan, labeling it “dastardly.”

“We are not letting them do this. It’s a dastardly thing, “he said. “These folks risked their lives for us.”

“This VA system is a lot better than a lot of private hospitals where you have to pay so much copayments, this, that, and the other thing, where they make you wait, where they treat you shabbily, etc.,” the senator said. explained. “And if you close this hospital it’s going to hurt every hospital, because who’s going to take care of these folks if they go to the local hospitals which are already overburdened? They don’t want to go to the local hospitals. ”

John Rowan – head of Vietnam Veterans of America who has undergone treatment several times at the Manhattan VA hospital – spoke of the importance of a facility dedicated to addressing veterans’ medical needs.

Wendy McClinton, who served in Operation Desert Storm and serves as president and CEO of Black Veterans for Social Justice, added, “If you close these facilities, you’re not really thanking us. [our] service; you’re really hindering the services that we gave. “

The plea from Schumer and local vets Sunday came a day after Mayor Eric Adams said he plans to ask the Biden administration to nix its plan to shutter the pair of facilities.

“They need to be open, and I’m joining my federal and state lawmakers because they gotta be open,” the mayor said. “There is no reason why we are closing those hospitals. We fought before, and I’m going to Washington, DC, and we are going to fight again. We need those hospitals open. “

Rep. Nicole Malliotakis (R-Staten Island / Southern Brooklyn) told The Post earlier this month that she was “mad as hell” about the plan and promised to fight to keep them open.

“This is unacceptable,” Malliotakis fumed in a March 8 letter to VA Secretary Denis McDonough.