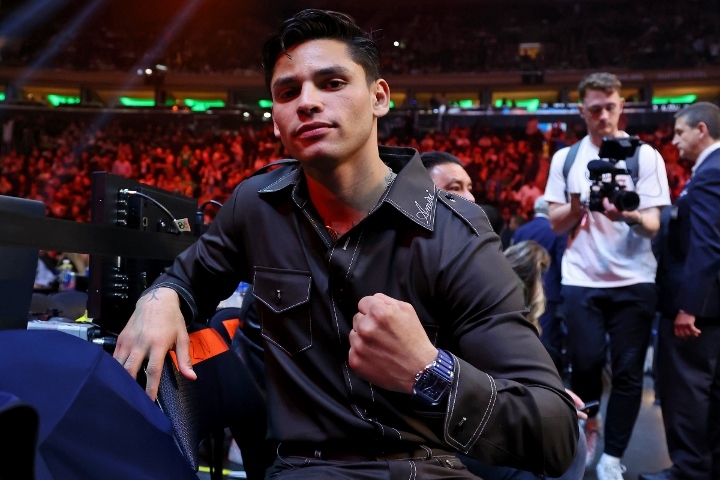 Ryan Garcia is ready to re-enter the title picture.

The unbeaten lightweight contender was the standout fighter among four title eliminators formally ordered by the World Boxing Council on a busy Tuesday for the Mexico City-based sanctioning body. Garcia is now on the clock to enter negotiations with Mexico City’s Isaac ‘Pitbull’ Cruz (23-2-1, 16KOs) for a WBC lightweight title eliminator, with the two sides given 30 days to reach terms to avoid a June 14 purse bid. hearing to determine promotional rights.

The winner of such a fight will establish the mandatory challenger to current WBC lightweight titlist Devin Haney (27-0, 15KOs), who is preparing for an undisputed championship showdown with lineal / WBA / IBF / WBO champ George Kambosos Jr. (20-0, 10KOs) on June 4 in Melbourne, Australia. It is doubtful that Garcia or Cruz would get the winner straight away, though at least one side the equation is eager to pick up where they last left off in the previous round of talks.

“I’m so excited,” Garcia exclaimed upon hearing the news from the WBC. “This fight [with Cruz] just got ordered by the WBC… little chance this man escapes from his fate when he enters the ring with me. “

Garcia is the number-two contender in the latest WBC rankings. Commanding the top spot is former three-division titlist Vasiliy Lomachenko (16-2, 11KOs), who is currently unavailable due to his serving as part of a Ukrainian defense team in the ongoing war with Russia. He is also the current WBO mandatory challenger and has already guaranteed a title shot upon his availability.

Ranked in between Garcia and Cruz is Russia’s Zaur Abdullaev (15-1, 9KOs), who is coming off a 12th round knockout of former three-division titlist Jorge Linares in February. However, Abdullaev is not currently available or eligible to fight in a WBC-sanctioned fight, leaving Garcia and Cruz as the top two available contenders.

Both are coming off wins on back-to-back weekends in April. Garcia (22-0, 18KOs) ended a 15-month ring hiatus with a lopsided points win over streaking contender Emmanuel Tagoe (32-2, 15KOs) of Accra, Ghana, whose 32-fight win streak was shut down by Garcia in their April 9 DAZN headliner from Alamodome in San Antonio. Garcia proved his relevance as a lightweight contender as well as a top draw, with the event generating $ 1,307,735 in ticket sales as recently reported by BoxingScene.com.

The two fights came about after Garcia and Cruz were unable to reach their own deal for a fight that would have taken place either April 2 or April 9.

A disagreement over where the fight would air proved to be the ultimate dealbreaker. Garcia fights on DAZN as part of the Golden Boy Promotions stable. Cruz fights under Manny Pacquiao’s MP Promotions banner and Premier Boxing Champions, under which the 5’4 “contender has been regularly featured on Showtime platforms.

They now have 30 days to figure out that part along with financial terms, if both sides are interested in moving forward with the fight. Among the other title eliminators ordered by the WBC were:

All four eliminators come with interesting backstories and curiosity on whether there is a clear path to the title in any given scenario.

Moloney is scheduled to face Philippines’ Aston Palicte on the Kambosos-Haney undercard. A win will position the two-time title challenger to next face Sor Rungvisai. By that point, Donaire will have faced WBA / IBF bantamweight champion Naoya Inoue (22-0, 19KOs) in their June 7 rematch.

The Garcia-Cruz winner will have to wait out whether a rematch takes place between Kambosos and Haney, with such an option available for Kambosos should he lose. The winner of their June 4 fight and potential rematch is already bound to a WBO mandatory with Lomachenko, a fight where Top Rank would have full control if Haney emerges as the undisputed champ since he was forced to sign a three-fight co-promotional deal. to land the ESPN-televised fight with Kambosos.

Garcia seems to be on board, now that he is all the way back following two separate but back-to-back ring breaks for mental health reset and to rehabilitate an injured right wrist that required surgery.

“Let’s go [P]itbull, roof roof (simulating a barking dog), ”Garcia stated. “[T]ime to make this happen. [D]on’t do anything weird, let’s give the fans what they want! ”

Jake Donovan is a senior writer for BoxingScene.com. Twitter: akeJakeNDaBox