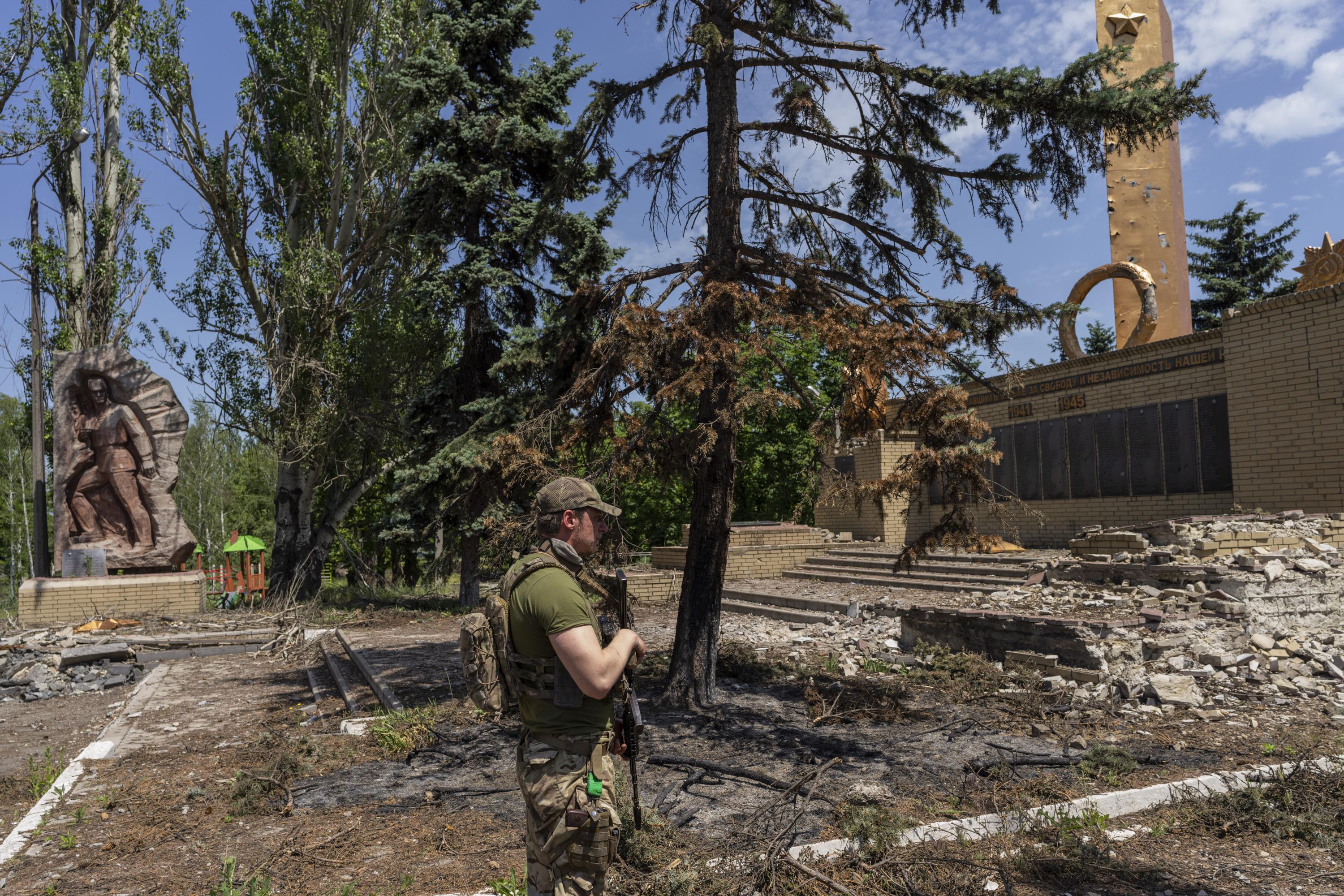 KYIV, Ukraine (AP) – Britain pledged Thursday to send sophisticated medium-range rocket systems to Ukraine, joining the United States and Germany in equipping the embattled nation with advanced weapons for shooting down aircraft and knocking out artillery.

Western arms have been critical to Ukraine’s success in stymieing Russia’s much larger and better-equipped military during a war now in its 99th day. But as Russian forces closed in on a key city in recent days, the Ukrainian government said its fighters needed better rocket launchers to prevail.

A Kremlin spokesman again warned of “absolutely undesirable and rather unpleasant scenarios” if the latest Western-supplied weapons were fired into Russia.

“This pumping of Ukraine with weapons … will bring more suffering to Ukraine, which is merely a tool in the hands of those countries that supply it with weapons,” Kremlin spokesman Dmitry Peskov told reporters.

Russian forces continued to pound towns and cities overnight and to tighten their grip on the eastern city of Sievierodonetsk. The UK Defense Ministry reported that Russia had captured most of the city, one of two in Luhansk province that had remained under Ukrainian control.

As fighting raged on in Ukraine’s east, some residents forced to flee Russian attempts to storm the capital, Kyiv, confronted the overwhelming task of rebuilding their shattered lives.

Nila Zelinska and her husband, Eduard, returned this week for the first time to the charred ruins of what used to be their home outside Kyiv. They fled with her 82-year-old mother amid Russian shelling and airstrikes in the days of the war.

Zelinska sobbed and recovered from the rubble a doll that belonged to one of her grandchildren, clutching it as if it were a real child.

“May there be peace on earth, peace so that our people are not suffering so much,” she said.

Speaking by video link to a security conference in Slovakia, Ukrainian President Volodymyr Zelenskyy called for even more weapons and sanctions targeting Russia to halt such horrors.

Zelenskyy said Russia had fired 15 cruise missiles in the past day and used a total of 2,478 missiles since invading Ukraine, “most of them targeted civil infrastructure.”

British Defense Secretary Ben Wallace said the UK would send an unspecified number of M270 launchers, which could fire precision-guided rockets up to 80 kilometers (50 miles). Ukrainian troops will be trained in the UK to use the equipment, he said.

The British government says the decision to provide the launchers was coordinated closely with the US government, which said Wednesday that it would supply High Mobility Artillery Rocket Systems to Ukraine.

The two missile systems are similar, though the American one has wheels while the British one – also US-built – runs on tracks.

Germany had come under criticism that it was not doing enough to help Ukraine. Chancellor Olaf said Wednesday that his country would supply Ukraine with modern anti-aircraft missiles and radar systems. He told lawmakers that the IRIS-T’s surface-to-air missiles Germany planned to provide were the most modern air defense system the country has.

After Western-supplied arms helped Ukraine fend off Russian attempts to storm the capital, Moscow shifted its focus to seizing all of eastern Ukraine’s industrial Donbas region. As Russia’s military steadily bombarded Ukrainian-held areas, its offensive there resulted in incremental gains in the last week.

A Ukrainian military expert said an uptick in Russian missile strikes came in response to the newly promised arms.

“Supplies of Western weapons are of great concern for the Kremlin, because even without sufficient weapons the Ukrainian army is daringly resisting the offensive,” military analyst Oleh Zhdanov told The Associated Press.

Analysts think Russia is hoping to overrun the Donbas before any weapons that might turn the tide arrive. It will take at least three weeks to get the precision US weapons and trained troops onto the battlefield, the Pentagon said. But Defense Undersecretary Colin Kahl said he believes they will arrive in time to make a difference in the fight.

Kyiv is also set to get a diplomatic boost with the formal installation of a new US ambassador to Ukraine. US Ambassador Bridget Brink was set to hand her credentials to Zelenskyy on Thursday.

Brink will be Washington’s first ambassador to Kyiv since former US President Donald Trump abruptly forced out Ambassador Marie Yovanovitch in 2019. She later became a key figure in the first impeachment proceedings against Trump.

Ahead of her Senate confirmation last month, Brink promised senators she would work to make Russia’s invasion of Ukraine a “strategic failure.” Her work in Kyiv is expected to focus on coordinating Western weapon shipments.

Russian Foreign Minister Sergey Lavrov called Ukraine’s repeated push for more weapons a “direct provocation intended to draw the West into the fighting.” He warned that US-supplied multiple rocket launchers would raise the risk of an expanded conflict.

Meanwhile, Russian forces kept up their bombardment of the Donbas and other parts of Ukraine while ground troops made an inching advance in the east.

A regional governor said Russian forces now control 80% of Sievierodonetsk, a city that is key to Moscow’s efforts to complete its capture of the Donbas. Ukrainian forces and Russia-backed separatists have fought in the eastern region for eight years, and the separatists held swaths of territory before the Russian invasion.

Military analyst Zhdanov noted that after the fierce fighting in and around Sievierodonetsk, Russian forces would be “exhausted,” and military leaders would need to replenish both their troops and weapons.

“Ukraine will try to use this pause to accumulate Western weapons, form a strategic reserve and prepare a counteroffensive,” he said.

The only other city in Luhansk province that the Russians have not yet captured, Lysychansk, is still fully under Ukrainian control, the governor said, but is likely to be the next target. The two cities are separated by a river.

Moscow’s forces also stormed the town of Komyshuvakha in the southeastern Zaporizhzhia region, large parts of which are under Russian control, the Ukrainian General Staff said Thursday.

In the western Lviv region, a Russian missile hit rail lines that were a key conduit for supplies of Western weapons and other supplies, officials said.

In his nightly video address, Ukraine’s president turned the focus to his country’s children. He said 243 of them have died in the war, 446 have been wounded and 139 were missing. The real numbers could be higher, he added, as his government doesn’t have a full picture of areas under Russian occupation.

Zelenskyy said 200,000 children were among the Ukrainians forcibly taken to Russia and dispersed across that vast country: “The purpose of this criminal policy is not just to steal people but to make those who are deported forget about Ukraine and unable to return.”

Becatoros reported from Sloviansk, Ukraine. Yuras Karmanau in Lviv, Ukraine, Ricardo Mazalan in Kyiv, Oleksandr Stashevskyi in Potashnya, Ukraine, and Associated Press reporters around the world contributed to this report.

Ernesto Castro
Ford to add over 6,000 U.S. jobs as it boosts electric vehicle production and prepares for a new Mustang
Law & Order: Angie Harmon Open to Returning to the NBC Crime Drama Series