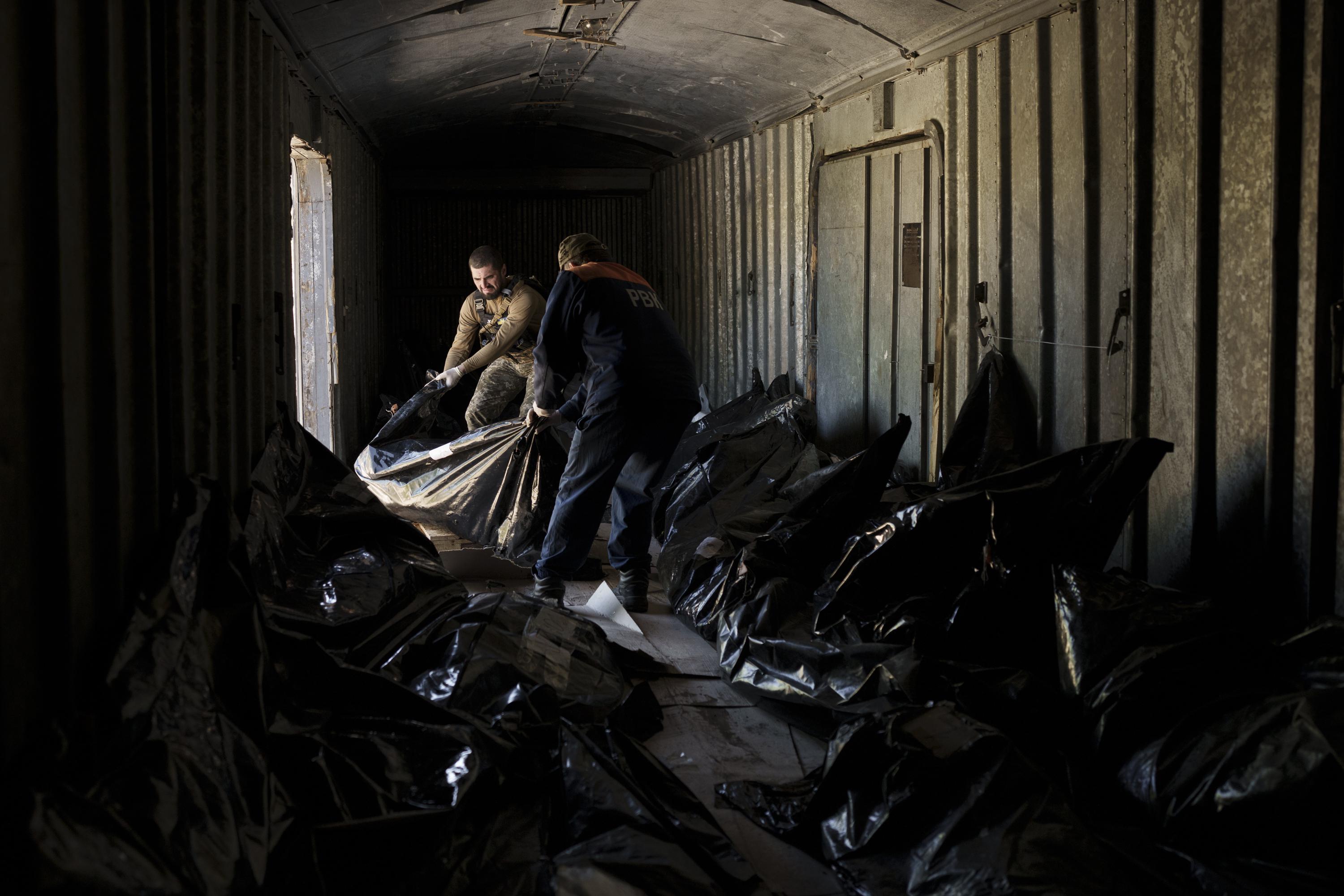 Determined to show success in a war now in its 11th week, Russian troops pummeled a seaside steel mill where an estimated 2,000 Ukrainian fighters are making their last stand in the port city of Mariupol.

The mill is the only part of the city not overtaken by the invaders. Its defeat would deprive Ukraine of a vital port and allow Russia to establish a land corridor to the Crimean Peninsula, which it seized from Ukraine in 2014.

The Ukrainian military’s General Staff warned of a high probability of missile strikes and said that Russian troops were seizing “personal documents from the local population without good reason” in Russian-controlled areas of Zaporizhzhia – the city where many fleeing Mariupol have gathered. The military alleged Russian troops were seizing documents to force residents to join in Victory Day commemorations.

Ukrainian President Volodymyr Zelenskyy warned the anniversary, which marks the Soviet Union’s triumph over Nazi Germany in 1945, could bring a renewed onslaught.

Speaking Monday at a military parade marking the holiday, Russian President Vladimir Putin sought to justify his invasion, by claiming that it was necessary to ward off what he described as “an absolutely unacceptable threat just next to our borders.” He has repeatedly alleged that Ukraine was planning to attack Russia – which Kyiv has flatly denied.

“The danger was rising by day,” he claimed, adding that “Russia has preemptively repulsed an aggression.”

Putin again scolded the West for failing to heed the Russian demands for security guarantees and a rollback to NATO’s expansion, arguing that it also left Moscow no other choice but to invade.

But he did not – at least so far – give any signal as to the next phase of the conflict nor did he claim the complete capture of Mariupol, which his forces have bombarded and besieged for weeks.

Ukrainian fighters in the steel mill in the port city have rejected Russian-set deadlines for laying down their arms, even as attacks continued by warplanes, artillery and tanks.

“We are under constant shelling,” said Capt. Sviatoslav Palamar, deputy commander of the Ukrainian Azov Regiment, a unit holding the steel mill.

Lt. Illya Samoilenko, another Azov Regiment member, said a couple hundred wounded soldiers were in the plant. He declined to say how many able-bodied fighters remained. Fighters lack lifesaving equipment and are having to dig by hand to free people from bunkers that collapsed under shelling.

“Surrender for us is unacceptable because we cannot grant such a gift to the enemy,” Samoilenko said.

The last of the civilians who had taken shelter with fighters at the plant were evacuated Saturday. They arrived Sunday night in Zaporizhzhia, the first major Ukrainian city beyond the frontlines, and spoke of constant shelling, dwindling food, ubiquitous mold – and using hand sanitizer for cooking fuel.

Britain’s Defense Ministry warned in a daily intelligence report on Twitter that Russia was running short of precision-guided munitions and increasingly is using inaccurate rockets and bombs, subjecting Ukrainian towns and cities to “intense and indiscriminate bombardments with little or no regard for civilian casualties. ”

More than 60 people were feared dead after a Russian bomb flattened a Ukrainian school being used as a shelter in Bilohorivka, an eastern village, Ukrainian officials said.

About 90 people were sheltering in the school’s basement when it was attacked Saturday. Emergency crews found two bodies and rescued 30 people, but “most likely all 60 people who remain under the rubble are now dead,” Serhiy Haidai, governor of Luhansk province, wrote on the Telegram messaging app.

Russian shelling killed two boys, ages 11 and 14, in the nearby town of Pryvillia, Haidai said. Luhansk is part of the Donbas, the industrial heartland in the east that Russia’s forces are working to capture.

Explosions echoed across the major Black Sea port of Odesa.

Keeping up their dogged resistance, Ukraine’s military struck Russian positions on a Black Sea island that was captured in the war’s first days. A satellite image by Planet Labs showed smoke rising from two sites on the island.

But Moscow’s forces showed no sign of backing down in the south. Satellite photos show Russia has put armored vehicles and missile systems at a small base in the Crimean Peninsula.

Ukraine’s military also warned some 19 Russian battalion tactical groups were stationed just across the border in Russia’s Belgorod region. Those groups likely consist of some 15,200 troops with tanks, missile batteries and other weaponry.

The most intense combat in recent days has taken place in eastern Ukraine. A Ukrainian counteroffensive in the northeast near Kharkiv, the country’s second-largest city, was making “significant progress,” according to the Institute for the Study of War, a Washington think tank.

However, the Ukrainian army withdrew from the embattled eastern city of Popasna after two months of fierce fighting. Rodion Miroshnik, a representative of the pro-Kremlin, separatist Luhansk People’s Republic, said its forces and Russian troops had captured most of the city.

The Kharkiv regional administration said three people were killed in shelling of the town of Bogodukhiv, about 50 kilometers (30 miles) from Kharkiv.

South of Kharkiv, in Dnipropetrovsk province, the governor said a 12-year-old boy was killed by a cluster munition that he found after a Russian attack. An international treaty bans the use of such explosives, but neither Russia nor Ukraine has signed the agreement.

“This war is treacherous,” Gov. Valentyn Reznichenko wrote on social media. “It is near, even when it is invisible.”

The Group of Seven industrial democracies pledged to ban or phase out imports of Russian oil. The G-7 consists of the US, Canada, Britain, Germany, France, Italy and Japan.

US first lady Jill Biden with her Ukrainian counterpart. Canadian Prime Minister Justin Trudeau raised his country’s flag at its embassy in Kyiv. And U2′s Bono, alongside bandmate The Edge, performed at a Kyiv subway station that had been used as a bomb shelter, singing the 1960s song “Stand by Me.”

The acting US ambassador to Ukraine, Kristina Kvien, posted a picture of herself at the American Embassy, ​​and described plans for the eventual US return to the Ukrainian capital after Moscow’s forces abandoned their effort to storm Kyiv weeks ago.

Zelenskyy released a video address marking the day of the Allied victory in Europe 77 years ago. The black-and-white footage showed him in front of a ruined apartment block in Borodyanka, a Kyiv suburb.

Drawing parallels between Russia’s invasion of Ukraine and the evils of Nazism, Zelenskyy said generations of Ukrainians understand the significance of the words “Never again,” a vow not to allow a repeat of the horrors of the Holocaust.

Gambrell reported from Lviv, Ukraine. Yesica Fisch in Bakhmut, David Keyton in Kyiv, Yuras Karmanau in Lviv, Mstyslav Chernov in Kharkiv and AP staff around the world contributed to this report.