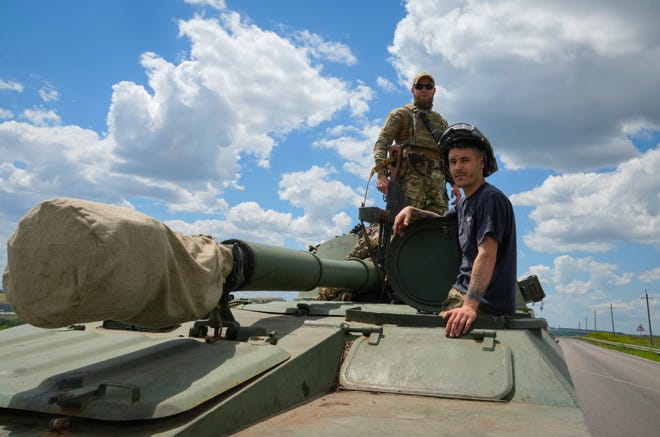 LONDON — Russian hostilities in Ukraine are preventing grain from leaving the “breadbasket of the world” and making food more expensive across the globe, threatening to worsen shortages, hunger and political instability in developing countries.

Together, Russia and Ukraine export nearly a third of the world’s wheat and barley and more than 70% of its sunflower oil and are big suppliers of corn. Russia is the top global fertilizer producer.

World food prices were already climbing, and the war made things worse, preventing some 20 million tons of Ukrainian grain from getting to the Middle East, North Africa and parts of Asia.

Weeks of negotiations on safe corridors to get grain out of Ukraine’s Black Sea ports have made little progress, with urgency rising as the summer harvest season arrives.

“This needs to happen in the next couple of months (or) it’s going to be horrific,” said Anna Nagurney, who studies crisis management at the University of Massachusetts Amherst and is on the board of the Kyiv School of Economics.

►A third American who traveled to Ukraine to lend assistance in the war against Russia appears to be missing amid growing indications the other two have been captured, State Department spokesman Ned Price said.

► Ukraine will not host Eurovision Song Contest in 2023, organizers announced Friday. In May, the Ukrainian band Kalush Orchestra won the contest with “Stefania” and the right to host next year’s event.

►The UK said British Prime Minister Boris Johnson was in Ukraine Friday on a surprise visit, his second trip since the Russian invasion began.

Amid Ukraine’s war, a farmer takes comfort in her snails

VERESNYA, Ukraine — The Ukrainian farmer was living a quiet life with the quietest of creatures: snails that she raises for export. Then, skies on the horizon turned flaming red. Russia had launched its invasion and nearby towns were burning.

Olena Avramenko’s village of Veresnya, northwest of the Ukrainian capital, Kyiv, was quickly occupied by Russian forces. But her snails were too precious to leave.

So she stayed, sheltering in her basement and cooking meals of snails — snail ravioli, fried snails, snails with garlic butter — for herself and the eight other people she took in.

The war’s disruption to exports of grain and other crops from Ukraine that feed the world has captured global attention and sent bread prices soaring across the world. But the production of other, more niche foodstuffs has also been impacted.

“Even before the Ukraine crisis, we were facing an unprecedented global food crisis because of Covid and fuel price increases,” Beasley said, according to the Guardian. “Then, we thought it couldn’t get any worse, but this war has been devastating.”

Russia and Ukraine together export some 30 percent of the world’s wheat, Beasley wrote in a March op-ed for the Washington Post. Plus, the two countries account for about one-fifth of global maize and barley, and nearly two-thirds of traded sunflower oil – of which Ukraine alone holds almost half of global exports, according to Our World in Data.

“It is a very, very frightening time,” Beasley said, according to the Guardian. “We are facing hell on earth if we do not respond immediately.”

As the US sends aid to Ukraine, some say it’s not flowing fast enough

The day after Russia invaded Ukraine, World Central Kitchen was dishing up hot meals to the war’s refugees.

Jose Andrés, the celebrity chief who founded the privately funded non-profit, assumed “the big guys” would show up soon after.

“But it took weeks for them to establish any presence,” Andrés recently told a congressional committee overseeing the billions of dollars the United States has committed to relief efforts in and around Ukraine.

Biden administration officials say there are vexing challenges to delivering those billions of dollars to those in need – from bureaucratic obstacles in Washington to treacherous conditions in a deadly conflict zone.

‘People are starving and thirsty’:As the US sends aid to Ukraine, some say it’s not flowing fast enough

The Ukrainian National Tchaikovsky Academy of Music – also called the Kyiv Conservatory – grappled with its name as Russia’s invasion of the country raises questions about the Russian composer’s place in Ukrainian society.

At a meeting held Thursday, members of the conservatory’s academic council questioned whether the ongoing war should cause the school to disavow Pyotr Tchaikovsky’s name.

Tchaikovsky, the prolific composer of well-known symphonies and ballets like The Nutcracker, was born in Russia but had strong family ties to Ukraine and spent many summers there throughout his lifetime. The Romantic era composer incorporated Ukrainian folk songs or melodies, and subjects, into at least 30 of his works.

The council ultimately decided to retain the Tchaikovsky name, in hopes that the decision would “return to Ukraine a composer with Ukrainian roots, to protect his heritage from its use by the aggressor as an instrument of destruction of the Ukrainian essence.”

“Governments and armies can fight, (but) cultures can never fight each other,” said Yuriy Rybchynsky, a member of the supervisory board. “Tchaikovsky, like Shakespeare, like Joan of Arc, like Christ, does not belong to one particular nation, it belongs to the whole world.”

Andy Tai Ngoc Huynh knew he might not come back. So the 27-year-old former Marine drew up a will, said goodbye to his fiancée and left Hartselle, Alabama, in April to help Ukrainians repel Russian forces.

That same month, not far away in Tuscaloosa, former Army Sgt. Alexander Drueke, a 39-year-old Iraq war veteran, had deliberated for a month before deciding to pack his gear for Ukraine.

The families of the two Alabama men – who went missing near Kharkiv in a battle last week – told USA TODAY they are holding out hope that the men could be released by  Russian-backed separatist forces.

Nearly 37 million children were displaced in 2021, the highest number of kids from their homes since World War II, according to UNICEF.

Some 22.8 million of those children were displaced within their countries due to conflict and violence, and 13.7 million of the children are refugees and seeking asylum, the statement reads.

“We can’t ignore the evidence: The number of children being displaced by conflict and crises is rapidly growing – and so is our responsibility to reach them,” said UNICEF Executive Director Catherine Russell.

The figures don’t include children displaced by climate or environmental disasters, or kids displaced by the war in Ukraine, according to UNICEF. In March, UNICEF said that 4.3 million children were displaced due to the war – more than half of the country’s estimated 7.5 million child population.

When Sergiy Astahof, 31, a Ukrainian migrant, fled for the United States with his partner after Russia invaded his home country, they were excited to finally live openly as a gay couple.

Instead, Astahof, who traveled through the U.S.-Mexico border on April 11, was taken in by kind community members of a conservative Texan church that opposes gay relationships. The church put him and his partner up in a spare room, providing food and shelter in exchange for volunteer work. The couple pretended to be merely friends – as they had in Ukraine and with their families – so as not to insult their hosts.

“We had uncomfortable feelings about this, but at the same time, it’s better than feeling unsafe in Ukraine or Eastern Europe,” Astahof said, speaking through an interpreter. “I know it’s a temporary solution. And right now, the first priority is to survive.”

Astahof and his partner are among the many LGBTQ Ukrainian migrants struggling to find their footing under U.S. humanitarian programs. The Biden administration has pledged to allow 100,000 Ukrainians fleeing war with Russia into the United States, but many LGBTQ migrants are finding it difficult to get into the country because they lack social support and the necessary connections, according to immigration experts.

Six Republican senators on Friday sought information from TikTok regarding “dangerous pro-war propaganda” from Russian state media on the app, while allowing no content from outside the country to balance it out.

The letter, sent to TikTok CEO Shou Zi Chew, said that the Chinese-owned social media giant evaded the information clampdown in Russia by banning Russian users from posting and stopping them from seeing posts from outside Russia. State-sponsored propaganda, from state run media outlets like RIA Novosti, is still allowed on the app. The Washington Post first reported this policy.

“We are deeply concerned that, through its failure to equally enforce this policy, TikTok is enabling the spread of pro-war propaganda to the Russian public, which risks adding to an already devastating human toll for both Ukrainians and Russians,” the senators wrote in the letter.

More than 900 kids have been killed or injured since Russia began its war against Ukraine in March, Ukraine’s prosecutor general’s office said on Telegram Saturday.

Some 323 children were killed and 583 injured, with most casualties occurring in the Donetsk and Kharkiv regions.

The prosecutor general’s office cautioned that those numbers aren’t final and are likely lower than the actual figure, as death and injury counts where there is active fighting cannot be taken.

Shelling by Russian forces has damaged some 2,028 educational institutions, of which more than 200 were “completely destroyed.”

Missing Americans:Two US military vets who felt compelled to fight Russia, are now missing in Ukraine

TALLINN, Estonia — A celebrated Ukrainian medic whose footage was smuggled out of the besieged city of Mariupol by an Associated Press team was freed by Russian forces on Friday, three months after she was taken captive on the streets of the city.

Yuliia Paievska is known in Ukraine as Taira, a nickname she chose in the World of Warcraft video game. Using a body camera, she recorded 256 gigabytes of her team’s efforts over two weeks to save the wounded, including both Russian and Ukrainian soldiers.

She transferred the clips to an Associated Press team, the last international journalists in the Ukrainian city of Mariupol, one of whom fled with it embedded in a tampon on March 15. Taira and a colleague were taken prisoner by Russian forces on March 16, the same day a Russian airstrike hit a theater in the city center, killing around 600 people, according to an Associated Press investigation.

“It was such a great sense of relief. Those sound like such ordinary words, and I don’t even know what to say,” her husband, Vadim Puzanov, told The Associated Press late Friday