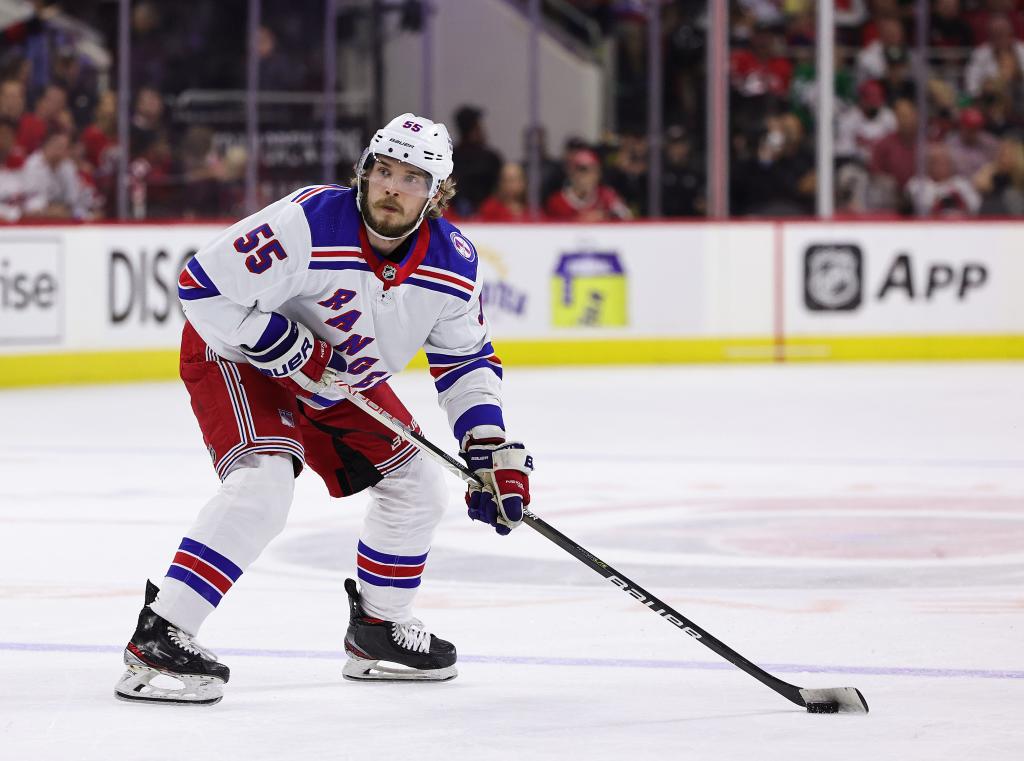 RALEIGH, NC – Rangers defenseman Ryan Lindgren is battling the same lower-body injury that sidelined him for three games in the first round of the playoffs, and it’s not going away.

It’s something head coach Gerard Gallant and the rest of the Rangers training staff will have to monitor for the remainder of their postseason.

“That’s what it is,” Gallant said. “That’ll be right until the end of the playoffs.”

While playing through the nagging injury, Lindgren also took a puck to the face in the Rangers’ 2-0 loss to the Hurricanes in Game 2 Friday night at PNC Arena and had to retreat to the locker room. He came right back to the game shortly afterward and seemingly didn’t miss a single shift.

Lindgren finished with three shots on goal, four blocked shots, and one hit.

Hockey players have the reputation of being insanely tough, but Lindgren brings a whole new meaning to the word. Since he entered the NHL in 2018-19, Lindgren has never been bruised, stitched up or bleeding in some way after games. That’s just the kind of player he is.

“He’s a warrior, that’s all he is,” Ryan Reaves said of Lindgren. “He’s obviously a little uncomfortable, but you can’t take him off the ice, especially in a playoff series. He’s a big player for us. Obviously, huge on the kill and just in key defensive times. He’s really big for us, so hats off to him, he’s grinding. ”

In the series opener of the Rangers’ second-round matchup with the Hurricanes on Wednesday, Lindgren went to the locker room with roughly eight minutes left in the first period before coming back out for the start of the second and finishing out the rest of their eventual 2-1 overtime loss.

The Rangers fell behind 3-1 in their first-round series against the Penguins without Lindgren in the lineup. When he returned, the Rangers rallied from behind in three straight games to advance. Even though he’s not an offense-producing defenseman, Lindgren plays a major role in the Rangers’ physical presence and on their back end in general, next to his longtime D-partner Adam Fox.

“Just leadership, his character,” Gallant said of what Lindgren has shown in these playoffs. “He wants to play. He’s got to battle and that’s what it is, it’s playoff time and it’s hard to keep those guys out. We don’t want him out. He’s got a big reason why we made it to the second round, obviously. ”

As a result of the uncertainty over Lindgren, Gallant and the rest of the coaching staff have had to consider going with 11 forwards and seven defensemen. The Rangers have already done it once in these playoffs, in Lindgren’s first game back in Game 5, to ensure that they don’t get caught with just five defensemen.

“We always think about that every day,” Gallant said. “It’s not the perfect set up, but we think about it right up until the game time.”