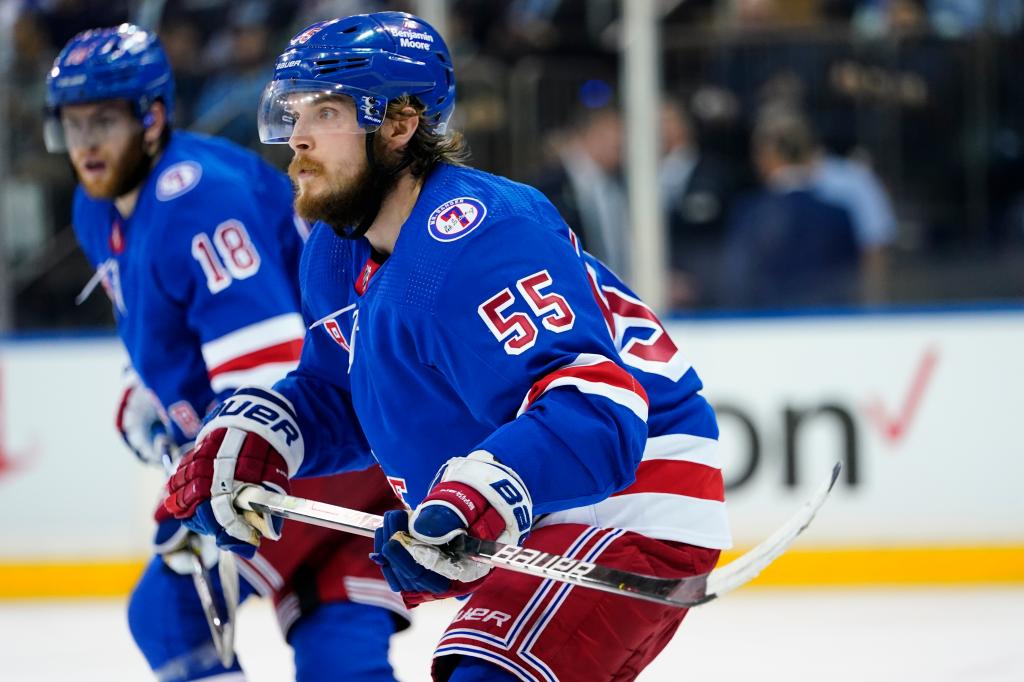 TAMPA, Fla. – There can be a fair amount of silk to the Rangers’ game and a fair amount of glitz surrounding Broadway’s hockey team. But the group that is two games away from the Stanley Cup Final is also filled with iron and fiber.

And there is no one who better personifies those qualities than the Blackest-and-Bluest-shirt of them all. That, of course, is the indestructible Ryan Lindgren, who would keep popping up in Whac-A-Mole no matter how hard and often he would be conked by the mallet.

“He’s a warrior for sure,” Tyler Motte said of Lindgren on Saturday, while sitting beside the defenseman at the club’s press briefing. “He doesn’t like the spotlight, he doesn’t like me talking about him sitting next to him up here.

“But we’ve got a lot of guys battling in a lot of different ways to do different things, some more visible than others. The way Lindy shows up, it makes you proud to be a teammate for someone like that who goes to battle.

“Maybe he’s not 100 percent every night, but he does everything for the team. That’s the mentality. “

The Blueshirts will go for their third straight victory against the reeling two-time defending champion Lightning, who took a couple of standing eight-counts at the Garden in Games 1 and 2. The Rangers out-skilled the Lightning, they out-goaltended the Lightning, and they outhit the Lightning.

There is an evident commitment to play in the tough areas and to compete for every loose puck. The Rangers are sustaining forecheck pressure on a consistent basis for just about the first time since October. The forwards are busting back to apply pressure on opposing puck-carriers. For the first time, really, the Blueshirts are putting pressure on the puck all over the ice.

That, and Igor Shesterkin, are the reason why the Rangers outscored the Lightning 8-2 at five-on-five at the Garden and have outscored Carolina and Tampa Bay 19-10 at full and equal strength in the past two rounds.

“There’s definitely been an increase in getting back and backchecking,” said head coach Gerard Gallant. “[Tampa Bay] rushes the puck as well as any team in the league, so as I talked about it the other night, so you’re doing you’re getting in shot lanes, you’re blocking more shots, you’re doing the little stuff.

“At playoff time, little stuff pays off big for your team and I think we’re doing a good job of that.”

Lindgren has made a career of doing what might appear to be small, but carries a major impact. He and running buddy Adam Fox have been on for only three goals against at five-on-five through the tournament while a plus-eight in that department. To place that into context, the K’Andre Miller-Jacob Trouba tandem has been on for 13 for and 12 against for a plus-one.

Of course, Lindgren did not play in Games 3 and 4 of the first round in Pittsburgh, when the Penguins put up a seven-spot in those consecutive contests. Cause or effect? He was sidelined with a lower-body injury he sustained or exacerbated in the triple-overtime series opener against the Penguins and did not return until Game 5.

Twice during the series against the Hurricanes, Lindgren left the bench to head back to the room. Twice he returned. Is anyone surprised?

“There’s definitely sometimes where it’s a battle and you do whatever you can to get back out there. I can’t say enough about [head athletic trainer] Jim Ramsay and his team and how much they help and get you prepared to get you back out there, ”Lindgren said. “It’s a bunch of guys battling through stuff.

“It’s playoff hockey. You want to be out there helping the team and battle through whatever you can. “

The Rangers obtained the rights to Lindgren from the Bruins at the 2018 deadline in the Rick Nash deal. Lindgren was lauded for his character, work ethic and leadership. Check, check, check. The room seems to be filled with similar high-character athletes who are responding to the moment.

“You kind of figured you were going to get hit and take some bumps and bruises along the way,” Lindgren said. “That’s kind of the style I like to play, to be physical and intense and you know you’re going to have to battle through stuff. That’s just playoff hockey.

“You just do whatever you can to rest up and heal up and get back out there. But I’m feeling better and better. Again, I can’t say enough about Jim Ramsay and how much he helps getting you back out there. “

Gallant talked about how it had become almost automatic for him to expect Lindgren to carry on regardless of the medical circumstance. The coach was asked what it would take inside for the 24-year-old defenseman to play through physical challenges.