Rangers must get greedy when it comes to Stanley Cup chase 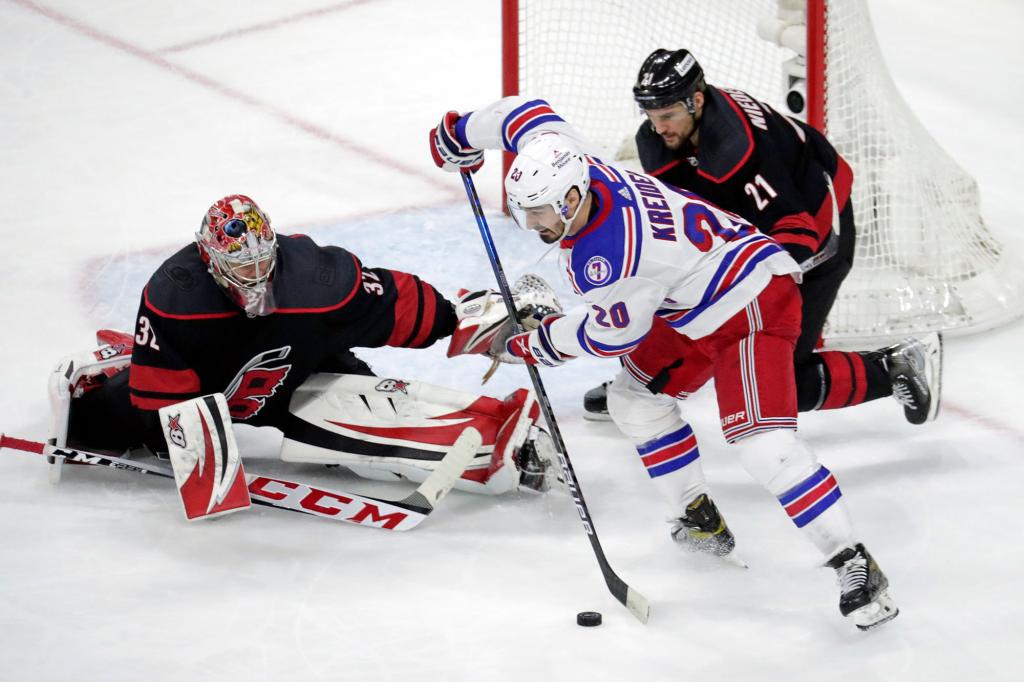 Greed – for lack of a better word – is good. Greed is right. Greed works. Greed clarifies, cuts through, and captures the essence of the evolutionary spirit. “

You’re a Rangers fan, flush with the kind of success that’s only been a rumor (or a visitor to Long Island) these past few years. You have spent a month on pins and needles, enduring two seven-game gauntlets, the first of which ended in overtime glory, the second in a bludgeoning of a team formerly unchallenged on home ice.

But you also approve every word – every syllable – of Gordon Gekko’s treatise on more, more, more, always wanting more. This isn’t your first Stanley Cup dance. You know there’s nothing quite like the obstacle course hockey players put themselves through to determine who gets to pass the Cup around come summer, so you also know something else:

The job isn’t close to being done.

The job, in fact, is only half done.

“It’s a little bit poetic,” Chris Kreider said with a small chuckle on Tuesday, the day before the Rangers host Game 1 of the Eastern Conference Final against the Tampa Bay Lightning. Kreider was here the last time the Rangers got here, after all, in the spring of 2015, and Tampa was there, too. It was the Lightning who prevailed in seven games, who advanced to the Cup Final, who lost in six to the Blackhawks.

The Lightning have actually served up heaping doses of bad poetry all around town for years. The last two years it was the Islanders who were this close, so close that so many of them could taste the champagne inside the Cup. There was that ’15 Rangers loss, the capper bookend 2-0 losses at the Garden in Games 5 and 7.

We’ve had too much of that poetry around here, too much of Andrei Vasilevskiy, too much of Steven Stamkos and old friend Ryan McDonagh, too many Lightning celebrations, too many consolation-prize handshake lines. If there’s one lesson the Islanders learned the hard way a year ago: seize the day when the day presents itself.

Because you never know when you’ll be back here again.

(Maybe give Barry Trotz a call, ask him about that.)

“You find different ways to win and you certainly look to that throughout the season,” said GM Chris Drury, who has had about as close to a dream ride in his first year at the helm as anyone could have forecast. “In both [playoff] series to be able to come back, win some games on the road, take care of games in our building, it’s a resilient bunch that really has had no quit from Day 1. ”

Even before they ushered Pittsburgh and Carolina from the playoffs we knew that much about these Rangers, saw early on the chemistry and the possibilities, recognized quickly that they had a goaltender, Igor Shesterkin, primed to replace Vasilevskiy as the best one on planet Earth. The comeback from 1-3 down to the Penguins solidified that; the comebacks from 0-2 and 2-3 to the Hurricanes fortified it.

“Greed, in all of its forms – greed for life, for money, for love, knowledge – has marked the upward surge of mankind”

And greed will deliver the Rangers well. The Lightning have those matched-set Cups from the last two years back home. They have won 10 straight playoff series, which means they are actually halfway to the Dynasty Islanders’ sacred mark of 19 playoff wins in a row.

(Kind of puts you in a who-do-I-want-to-lose-more bind, Islanders fans, no?)

… And they are coming off a series in which they allowed all of three goals in four games to the Florida Panthers, who only won the Presidents’ Cup this year.

It’s going to be a grind, sure. But when, exactly, has winning a Cup ever been a breeze?

“I think any team’s capable of beating anybody at this point in time and that’s what I see with the remaining four teams,” said Rangers coach Gerard Gallant. “They’re all real good hockey teams.”

Including the Rangers. Since 1994, when they breezed through two rounds before engaging in steel-cage struggles with New Jersey and Vancouver, the Rangers have made it this far five other times, but beyond only once. When those seasons were over, there was a sense of accomplishment, same there’ll be if they fall nobly to Tampa Bay across the next two weeks. Noble is nice. Noble is fine. Noble is admirable.

Ernesto Castro
Tyler Perry’s Sistas: Are Hayden and Karen More Alike Than We Thought?
Ant Anstead Shared a Sweet Photo That Shows His Son is Already Taking After Him