If you purchase an independently reviewed product or service through a link on our website, ShekNow may receive an affiliate commission.

Princess Diana’s twin nieces Lady Amelia and Lady Eliza Spencer are not believed to have attended Queen Elizabeth II’s funeral or any of the events that preceded it. Instead, they’re showing off their effortlessly stylish sides by attending the front row of London Fashion Week. All eyes were on her and her sensational outfits as she attended the David Coma SS23 show during London Fashion Week on 18 September. 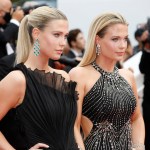 Lady Eliza arrived in a cut-out mini-dress that was glamorous as well as mesmerizing. Below, she’s rocking a white sequined bralette that matches her chic heels. Her twin sister Lady Amelia wore a similarly cut mini dress, but rocked things up with some flashy pink feathers around the cut-outs. She paired a white and pink mini-dress with a black bralette, metallic pumps and a sparkling clutch.

To say that these two looked charming is an understatement.

Now, the chic twins are making waves at London Fashion Week while their cousins ​​mourn their grandmother, and neither have publicly said anything about the late Queen since her death on 8 September.

In case you didn’t know, Eliza and Amelia are the children of Princess Diana’s brother Charles Spencer, 9th Earl Spencer. They share another sister named Kitty, a brother named Louis Spencer, and a half-brother named Samuel.

For years, Inspector Ken Wharf was one of Princess Diana’s closest confidants. The former bodyguard of the late Princess of Wales offers an intimate account of the famous royal’s life Diana: A closely guarded secret. The memoir gives us new insight into everything we knew about Princess Diana, with unfiltered anecdotes and reflections on her life through the eyes of Wharf.

Before you leave, click here to see all of our favorite photos of Princess Diana.