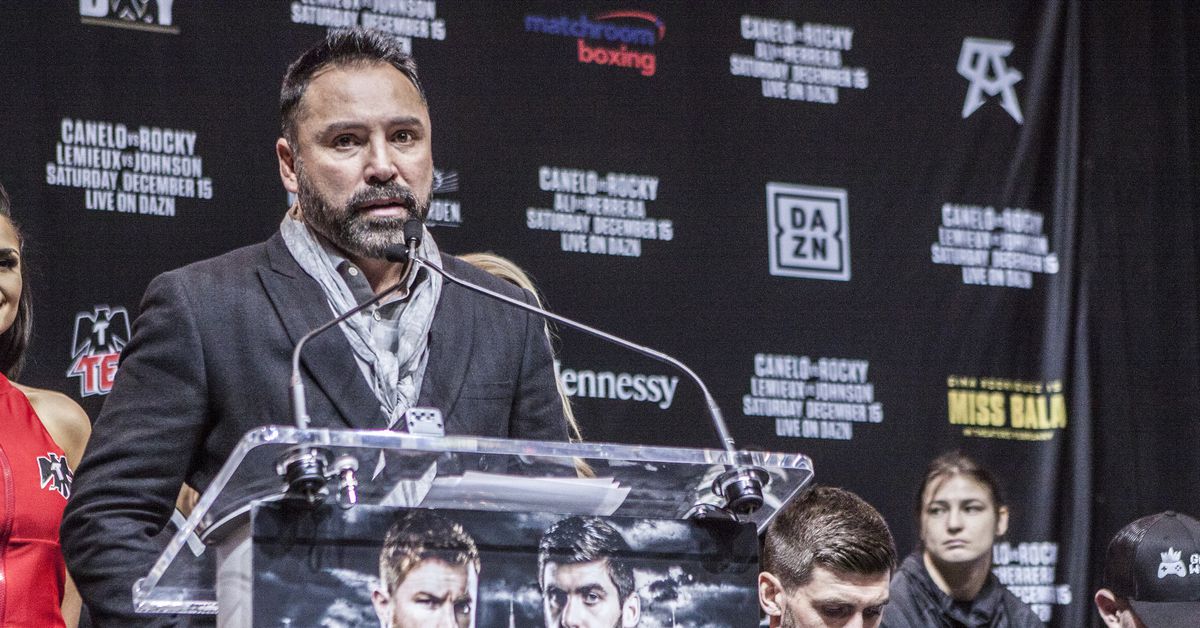 Oscar De La Hoya may look to bury the hatchet with Dana White, but he seems a little less inclined to do so with fellow boxing promoter Eddie Hearn.

In many respects, Hearn is seen as a brash upstart in the world of boxing promotion. In 2020, the Matchroom Boxing chairman scored the biggest coup of his career, signing Canelo Alvarez after the boxer sued De La Hoya’s Golden Boy Promotions and was released from contract. Hearn then successfully promoted a number of Canelo fights, but in May, the biggest star in boxing suffered an unexpected career setback, losing an unanimous decision to Dmitry Bivol.

De La Hoya lambasts Hearn for making the fight in the first place.

“It was a lose-lose situation,” De La Hoya told Ariel Helwani on The MMA Hour. “Nobody knew Bivol whatsoever. I would have promoted Bivol to get a bigger name, because nobody knew who he was before he fought Canelo. He was irrelevant. He was nobody. We were actually going to face him [Gilberto] Zurdo Ramirez, but Canelo has a promoter now who doesn’t come from the boxing world. He doesn’t know the fight game, and he got Canelo beat. It was the wrong style. Las Vegas had no buzz whatsoever.

“I was actually there, sitting ringside, supporting Canelo. Canelo is the superstar of the game right now [and] Eddie Hearn didn’t do any justice to Canelo when he faced him against Bivol. ”

Losing the biggest star in boxing is obviously a tough pill to swallow, but De La Hoya contends his disdain for Hearn the promoter is about more than that. De La Hoya won 11 world titles across six weight classes and, at one point, was the most commercially successful boxer of all time. On top of that, De La Hoya’s Golden Boy Promotions promoted world champions for 20 years. He contends Hearn, who took over Matchroom Sports from his father but has no personal experience in the ring, simply doesn’t understand the finer points of pugilism.

“He’s a character, that’s all it is,” De La Hoya said. “The business of boxing, to build superstars, to build champions, it takes a lot of strategy, it takes a lot of insight, knowing the fighters, knowing their styles, and that’s one thing I’m an expert at. When I built Canelo Alvarez, when he crossed the border from Mexico at the tender age of 18 years old and I promoted his first fight, we had a vision. We knew exactly what we had in our hands and we built him to be a monster.

“That’s exactly what I intend to do with Virgil Ortiz and Ryan Garcia, the next generation, and that’s what other promoters don’t know. They don’t know the secret of how to build a superstar. I’ve promoted Mayweather, I’ve promoted Pacquiao, I’ve promoted all the big superstars in the past, and there’s a formula that you need to have in order to build superstars. …

“Look, he’s doing a lot of fights that mean nothing, especially here in the US He might be good promoter in the UK, and he’s building European fighters, but that means nothing here in the US I know this is a business and he’s partners with DAZN, and obviously I’m partners with DAZN, but let’s just stay in our own lanes and do our jobs right. Let me focus on the US market and build champions, and boxing will keep on thriving for many years to come. “