Officials: 300 dead in airstrike on theater in Mariupol

Home /World/Officials: 300 dead in airstrike on theater in Mariupol 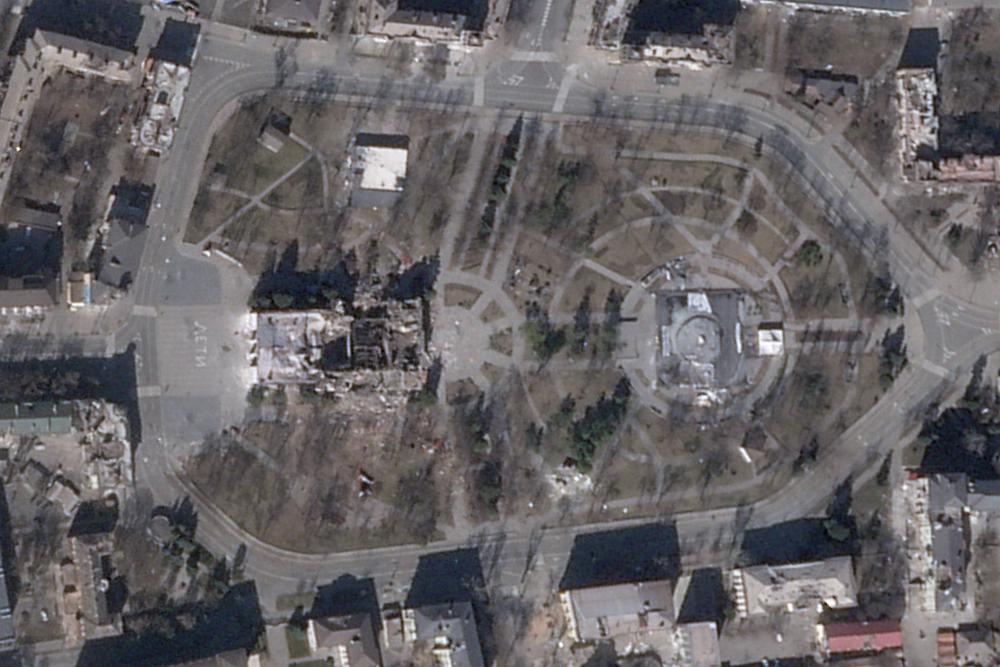 KHARKIV, Ukraine (AP) – About 300 people died in a Russian airstrike last week on a theater being used as a bomb shelter in the besieged Ukrainian city of Mariupol, the city government said Friday, citing eyewitnesses.

When the theater was struck March 16, an enormous inscription reading “CHILDREN” was posted outside in Russian, intended to be visible from the skies above.

It was not immediately clear whether emergency workers had finished excavating the site or how the eyewitnesses arrived at the horrific death toll. Soon after the airstrike, Ludmyla Denisova, the Ukrainian parliament’s human rights commissioner, said more than 1,300 people had been sheltered in the building.

Mariupol has been the scene of some of the worst devastation of the war, which has seen Russia relentlessly besiege and pummel Ukraine’s cities. The misery inside them is such that almost anyone who can is trying to leave and those left behind face desperate food shortages in a country once known as the breadbasket for the world.

In the shelled city of Kharkiv, mostly elderly women came to collect food and other urgent supplies. In the capital of Kyiv, ashes of the dead are piling up at the main crematorium because so many relatives have left, leaving urns unclaimed.

For civilians unable to join the flood of refugees from Ukraine, the days of plenty in the country are becoming just a fading memoryas the war grinds into a second month.

With Ukrainian soldiers battling Russia’s invasion force to a near stalemate in many places and the president urging people to remain steadfast, the US and the European Union announced a move to further squeeze Russia: a new partnership to reduce Europe’s Reliance on Russian energy and slowly squeeze off the billions of dollars the Kremlin gets from sales of fossil fuels.

In Ukraine, the war for hungry civilians is increasingly being counted in precious portions of food, and block of cheese now goes a very long way.

Fidgeting with anticipation, a young girl in Kharkiv watched intently this week as a volunteer’s knife cut through a giant slab of cheese, carving out thick slices – one for each hungry person waiting stoically in line.

Hanna Spitsyna took charge of divvying up the delivery of food aid from the Ukrainian Red Cross, handing it out to her neighbors. Each got a lump of the cheese that was cut under the child’s watchful gaze, dropped chunk by chunk into plastic bags that people in line held open like hungry mouths.

“They brought us aid, brought us aid for the elderly women that stayed here,” Spitsyna said. “All these people need diapers, swaddle blankets and food.”

Unable to sweep with lightning-quick speed into Kyiv, their apparent aim on Feb. 24 When the Kremlin launched the war, Russian forces are instead raining down shells and missiles on cities from afar.

The outskirts of Kharkiv were shrouded by foggy smoke Friday, with shelling constant since early in the morning. In a city hospital, several wounded soldiers arrived, with bullet and shrapnel wounds, a day after doctors treated a dozen civilians. Even as doctors stabilized the direst case, the sound of shelling could be heard in the surgery ward.

Russia’s military claimed Friday that it destroyed a massive Ukrainian fuel base used to supply the Kyiv region’s defenses, with ships firing a salvo of cruise missiles, according to the Interfax news agency. Videos on social media showed an enormous fireball explosion near the capital.

For civilians, the misery has become unrelenting. Kyiv, like other cities, has seen its population dramatically reduced in the vast refugee crisis that has seen more than 10 million displaced and at least 3.5 million fleeing the country entirely. In the capital, over 260 civilians have died and more than 80 buildings have been destroyed since the start of the war.

Ukrainian President Volodymyr Zelenskyy urged his country to keep up its military defense and not stop “even for a minute.” Zelenskyy used his nightly video address on Thursday to rally Ukrainians to “move toward peace, move forward.”

“With every day of our defense, we are getting closer to the peace that we need so much. “We can’t stop even for a minute, for every minute determines our fate, our future, whether we will live.” He said thousands of people, including 128 children, died in the first month of the war. Across the country, 230 schools and 155 kindergartens have been destroyed. Cities and villages “lie in ashes,” he said.

At an emergency NATO summit in Brussels on Thursday, Zelensky pleaded with the Western allies via video for planes, tanks, rockets, air defense systems and other weapons, saying his country is “defending our common values.”

In a video address to EU leaders, meanwhile, Zelenskyy thanked them for working together to support Ukraine and impose sanctions on Russia, including Germany’s decision to block Russia from delivering natural gas to Europe through the new Nord Stream 2 pipeline. But he lamented that these steps were not taken earlier, saying there was a chance Russia would have thought twice about invading.

While millions of Ukrainians have fled west, Ukraine accused Moscow of forcibly removing hundreds of thousands of civilians from shattered cities to Russia to pressure Kyiv to give up. Lyudmyla Denisova, Ukraine’s ombudsperson, said 402,000 people, including 84,000 children, had been taken against their will into Russia, where some may be used as “hostages” to pressure Kyiv to surrender.

The Kremlin gave nearly identical numbers for those who have been relocated, but said they were from predominantly Russian-speaking regions of Donetsk and Luhansk in eastern Ukraine and wanted to go to Russia. Pro-Moscow separatists have been fighting for control for nearly eight years in those regions, where many people have supported close ties to Russia.

CIn Chernihiv, where an airstrike this week destroyed a crucial bridge, a city official, Olexander Lomako, said a “humanitarian catastrophe” is unfolding as Russian forces target food storage places. He said about 130,000 people are left in the besieged city, about half its prewar population.

Russia said it would offer safe passage starting Friday to 67 ships from 15 foreign countries that are stranded in Ukrainian ports because of the danger of shelling and mines.

IanRussian forces fired two missiles late Thursday at a Ukrainian military unit on the outskirts of Dnipro, the fourth-largest city in the country, the regional emergency services said. The strikes destroyed buildings and set off two fires, it said. The number of dead and wounded was unclear.

IthWith the US and others expanding sanctions on Russia, Moscow sent a signal that the measures have not brought it to its knees, reopening its stock market but only allowing limited trading to prevent mass sell-offs. Foreigners were barred from selling, and traders were prohibited from short selling, or betting prices would fall.

– The International Atomic Energy Agency said it has been told by Ukrainian authorities that Russian shelling is preventing worker rotations in and out of the Chernobyl nuclear plant. It said Russian forces had shelled Ukrainian checkpoints in the city of Slavutych, home to many Chernobyl nuclear workers, “putting them at risk and preventing further rotation of personnel to and from the site.”

Meanwhile, Kyiv and Moscow gave conflicting accounts about the people being relocated to Russia and whether they were going willingly – as Russia claimed – or were being coerced or lied to.

Russian Col. Gen. Mikhail Mizintsev said the roughly 400,000 people evacuated to Russia were being provided with accommodations and payments and had voluntarily left eastern Ukraine.

But Donetsk Region Gov. Pavlo Kyrylenko said that “people are being forcibly moved into the territory of the aggressor state.”

Among those taken, Ukraine’s Foreign Ministry charged, were 6,000 residents of Mariupol, the devastated port city in the country’s east.

Kyrylenko said Mariupol’s residents have been long deprived of information and that the Russians feed them false claims about Ukraine’s defeats to persuade them to move to Russia.

“Russian lies may influence those who have been under the siege,” he said.

Qena reported from Kyiv, Ukraine. Associated Press journalists around the world contributed to this report.