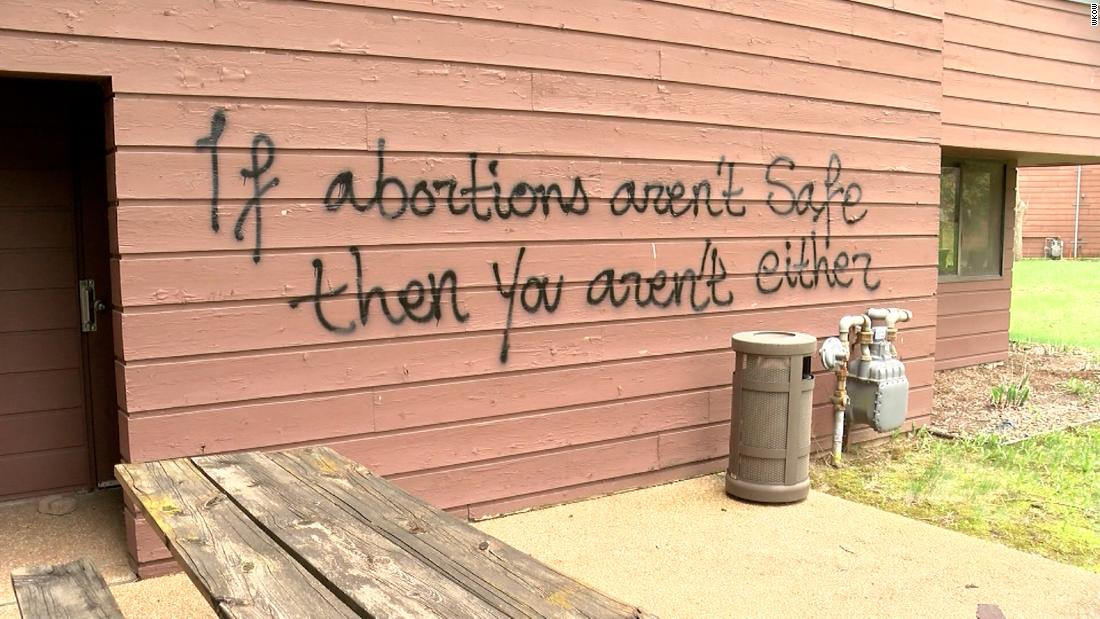 Local News |
The fire and vandalism occurred at the Wisconsin Family Action Office, CNN affiliate WISC reported. WFA is a political action committee that lobbies against abortion rights and same-sex marriage, according to its website.

Emergency dispatchers received a call from a passerby who saw fire coming from an office building on Sunday morning, Madison Police communications supervisor Keith Johnson told CNN. The Madison Fire Department firefighters were called to the building at about 6 am and were quickly able to put out the blaze, officials said. No injuries were reported.

Fire investigators believe the fire was intentionally set and are investigating the incident as arson, the fire department said.
A Molotov cocktail, which did not ignite, was thrown inside the building, Madison police said in an incident report. It appears a separate fire was started, police said, and graffiti was also found at the scene.
An image from WISC shows the graffiti written on the wall of the office: “If abortions aren’t safe, then you aren’t either.”
In a statement, Madison Police Chief Shon Barnes said WFA appeared to have been targeted because of its beliefs. He said federal agencies have been made aware of the incident and are working with the Madison police and fire departments in the investigation.

“Our department has and continues to support people being able to speak freely and openly about their beliefs. But we feel that any acts of violence, including the destruction of property, do not aid in any cause,” Barnes said. “We have made our federal partners aware of this incident and are working with them and the Madison Fire Department as we investigate this arson.”

WFA president responds to the vandalism

WFA President Juliane Appling told CNN she was at a Mother’s Day brunch at her church around 7:45 am Sunday when she got a call from her office building’s management, who said the WFA office had been broken into.

Appling said she was told a couple of what she describes as Molotov cocktails had been thrown through several windows in the space, which started a small fire.

Graffiti was found spray-painted on the outside of the building, where WFA leases space, she said.

“The irony of this happening on Mother’s Day is very poignant,” Appling said.

The WFA received no indication of any specific threat leading up to Sunday morning’s incident, she said.

“I pray that this doesn’t happen to anyone else, this needs to stop right now,” Appling said.

The alleged arson comes days after Politico published a draft of a Supreme Court majority opinion written by Justice Samuel Alito, which would strike down Roe v. Wade, the 1973 ruling that the constitution protects a woman’s right to an abortion.

The opinion would be the most consequential abortion decision in decades and transform the landscape of women’s reproductive health in America. The final opinion in the case – Dobbs v. Jackson, which concerns a challenge to Mississippi’s 15-week ban on abortion – is not expected to be published until late June.

Wisconsin is one of a number of states with an abortion restriction in place prior to the Roe ruling, which has never been removed. Wisconsin Attorney General Josh Kaul, a Democrat, said earlier this week that the state’s Department of Justice would not enforce the law if the Supreme Court overturned Roe, according to CNN affiliate WKOW.