Obi-Wan Kenobi Finale Recap: Was There a ‘Final’ Showdown? Plus, a Familiar Face Appears — Grade It! 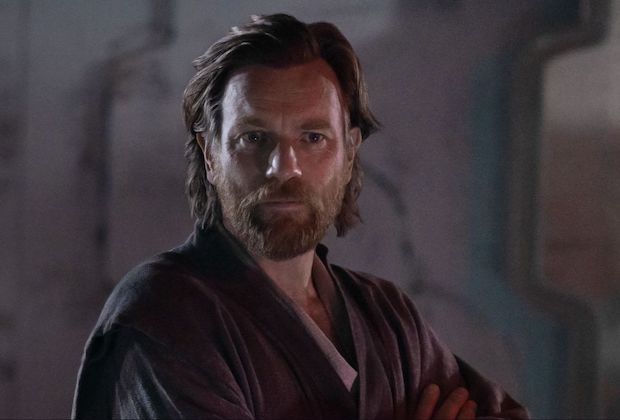 After the heroes evaded Vader’s attack on Jabiim, Obi-Wan Kenobi‘s finale found the rebels running out of time, with the Empire hot on their tail and waning shields.

Realizing this, Obi-Wan decides to buy everyone some time for repairs by facing Vader again, even if that might lead to his own death. Hugging Leia goodbye, Kenobi gives the young princess Tala’s (empty, sorry!) Holster and promises her that he will come back.

On Tatooine, Owen and Beru receive a heads up from a friend who had been grilled by Reva that she’s headed their way. Owen warns Luke to stay put and hide, since Tuskens are raiding farms in the area again. But if anything goes wrong, he needs to run.

Obi-Wan attempts to commune with Qui-Gon one more time, saying he needs to face Anakin. Whether he dies or his former apprentice does, this ends today. Roken is there to see him off, reminding the Clone Wars general that he doesn’t have to do this. But this is between Obi-Wan and Darth Vader, so there’s no turning back.

The Grand Inquisitor notes an escape craft leaving the transport with one person on board, but urges Vader to continue pursuing the rebels since this is their chance to wipe them out entirely. Vader, though, is laser focused on Kenobi and orders his ship to be prepared. As Obi-Wan braces for what he believes will be their final showdown – they will of course meet one more time, in A New Hope – he finds Lola in his pocket. Leia must have hidden the droid there while hugging him. Clever girl.

Following Obi-Wan’s drop ship to a barren moon, Vader once again comes face-to-face with his former master. Obi-Wan whips out his blue lightsaber and utters the same thing he told Anakin just before their battle on Mustafar at the end of Revenge of the Sith: “I will do what I must. ”

“Then you will die, ”Vader responds. They clash again.

At the same time, Reva arrives at Owen’s farm in pursuit of Luke. A prepped-and-positioned Owen and Beru fire blasters, which she deflects, her usually neat braids now loose and slightly disheveled after her being unceremoniously dismissed by Vader. Luke takes off running, and the former Inquisitor chases the boy to the dunes.

Back on the moon, Vader notes that Obi-Wan’s strength has returned but “the weakness still remains.” The Sith lord then uses the Force to bury Obi-Wan under some rocks he has hurled, saying, “Did you truly think that you could defeat me? You have failedmaster. ” 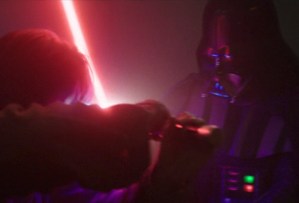 But Vader didn’t kill his former master with the cave-in. Rather, Obi-Wan uses the force to stop the rocks from crushing him. Fueled by memories of both Luke and Leia, he repulses them up and away, then catches up with Vader. Their lightsaber battle continues.

Obi-Wan fights with everything he’s got and eventually slices Vader’s helmet open with his lightsaber. The move weakens Vader, who gasps for air with half of his face exposed. It’s then that Kenobi sees his padawan’s face for the first time in years. “Anakin”He calls.

Through his damaged vocoder – we hear Hayden Christensen’s voice, distorted – Vader tells his former master that “Anakin is gone. I am what remains. ” Obi Wan tells him he’s sorry for what happened in the past, but Vader dismisses it. 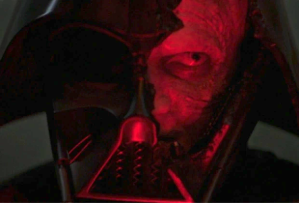 “I am not your failure. You didn’t kill Anakin Skywalker – I did, ”he notes, before vowing to destroy Obi-Wan in kind. Realizing that his friend truly is dead, Kenobi tells the broken man before him, “Goodbye, Darth,” and walks away. Through an angry voice, a weakened Vader calls after “Obi-Wan!” and collapses to his knees, steadying himself against the rocks.

Obi-Wan senses Luke in danger and speeds after the boy in his dropship. On Tatooine, Luke has fallen, after being Forced off a rocky ledge by Reva, and sits unconscious. When Reva approaches him to go in for the kill, she sees herself at his age, and memories of Anakin slaughtering younglings in the Jedi temple come rushing back. With her lightsaber raised, she finds herself now in Anakin’s position.

Obi-Wan lands at Owen’s farm and sees both Owen and Beru calling after Luke, and prepares to search for him in the dunes. But Reva appears in the distance, returning with the unconscious boy in her arms. She reports to Obi-Wan that she couldn’t off Vader’s offspring, and as such failed her dead friends. Obi-Wan doesn’t see it that way, insisting she honored them and has given them peace. When Reva asks if she has become Darth Vader, Obi-Wan says no, she has chosen not to. And who she is now is entirely up to her. Reva places her Inquisitor lightsaber in the sand, and Obi-Wan declares them both free.

On Mustafar, Vader speaks to Darth Sidious through a hologram. Sidious notes that Lord Vader seems agitated and wonders if thoughts of his old master have left him weakened. Vader insists that Kenobi now means nothing, and he only serves his new master. Cue “Imperial March” as Vader sits on his lonely throne.

Returned to Alderaan, Leia dresses herself with one modification: Tala’s holster. Both Queen Breha and Bail Organa love the new look, and Leia is ready to become a leader – with a few changes, of course. All three are greeted by an arriving Obi-Wan, who offers his help to the Organas should they ever need it again.

He also comes clean to Leia about not knowing her parents. “Princess Leia Organa, you are wise, discerning, kind-hearted. These are qualities that came from your mother, ”he tells her. “But you’re also passionate and fearless… forthright. These are gifts from your father. Both were exceptional people who bore an exceptional daughter. “

Kenobi wishes he could divulge more, but Leia says he doesn’t have to. When asked if she will ever see him again, Kenobi tells her maybe, if she ever needs help from a “tired old man.” However, no one must know, or that could endanger them both. Leia hugs him goodbye and Obi-Wan offers these familiar parting words: “May the Force be with you.” 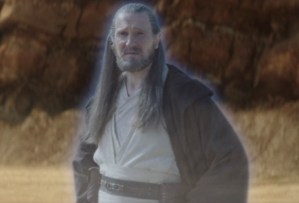 After returning to Tatooine, Obi-Wan is wearing his old Jedi robes while packing up the cave he’d been living in for a decade. Riding an eopie to the Larses’ farm, the former Jedi Master is invited by Owen to finally meet Luke. “Hello, there,” he says to the boy.

Shortly after, Obi-Wan rides through the desert and sees his master Qui-Gon Jinn as a Force ghost. (Hey, Liam Neeson!) He was starting to think his old master would never come.

“I was always here, Obi-Wan,” Qui-Gon tells him. “You just weren’t ready to see.” But now that Kenobi is ready, they have a way to go.

How did you feel about that big showdown in Obi-Wan Kenobi‘s season finale? Were you surprised to see Qui-Gon? And would you want a Season 2? Grade the episode and whole season below, then sound off in the comments.