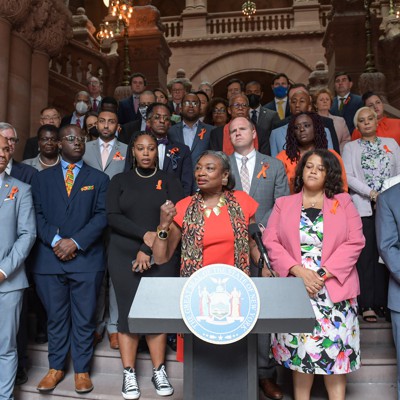 Always expect the unexpected in Albany, even a black bear hanging out in a tree near the Capitol as leaders finalize negotiations over end-of-year legislation.

State lawmakers have returned to Albany for the final three scheduled days of this year’s legislative session. As per tradition, that time will be filled with last-minute dealmaking as lawmakers scramble to approve hundreds of bills – many high-profile or contentious – before heading back to their districts for campaign season. Nearly 200 bills have been introduced or amended over the Memorial Day weekend, not a guarantee that the Legislature will act on them this week but an indication that they are likely part of the end-of-session agenda.

Gun control and abortion rights became the focal issues in the wake of an expected Supreme Court ruling overturning Roe v. Wade and two mass shooting tragedies, one in Buffalo. As of Tuesday, neither chamber had approved new bills addressing either issue, but lawmakers said they were negotiating packages of legislation with the intention of getting something approved before heading home. Gov. Kathy Hochul has pushed for several gun control measures, but has not put her weight behind any specific bills in the Legislature regarding abortion.

But guns and abortion are hardly the only two issues facing legislative leaders and the governor this week. Advocates and lawmakers are lobbying for their priorities to make the cut this year on issues ranging from voting rights to parole reform. As last year’s negotiations made clear, nothing is final until votes are cast – meaning that much can still change before Thursday evening. And an end-of-session Big Ugly always remains a possibility to get everything outstanding wrapped up into a single bill.

Here are where things stand right now. This post was last updated at 2 pm on May 31.

Hochul has made gun control and improving monitoring of domestic terrorism a major priority after a racist mass shooting targeting a Black neighborhood in Buffalo left 11 New Yorkers dead and a Texas school shooting left 19 children dead. Legislatively, she has called for the passage of a bill that would require all guns manufactured in New York to have microstamp technology, which etches information into bullets fired that makes it easier to identify where they came from. Bill sponsors state sen. Brad Hoylman and Assembly Member Linda Rosenthal expressed confidence that it would pass as part of a gun package. Hochul also proposed legislation to close the so-called “other guns” loophole to expand the definition of firearm to cover deadly weapons that currently do not technically meet the definition to be regulated as assault weapons. State Sen. Luis Sepulveda and Assembly Member Kenny Burgos introduced that bill on Monday, meaning that lawmakers can vote for it by Wednesday. Different legislation would close a separate loophole that allows some high-capacity magazines to remain legal in the state. Another bill would impose new restrictions on the purchase of guns and ammunition and require strict recordkeeping to keep gun paraphernalia out of the hands of those with criminal records. Both got amended on Monday as well, an indication that lawmakers may intend to act on it this week.

Lawmakers also amended legislation regarding abortion rights in recent days, and the state Senate plans to approve a number of bills on Tuesday. Two bills would prohibit medical malpractice and professional misconduct charges to New York abortion providers who offer services to people from other states where abortion may become illegal or highly restrictive. Along a similar vein, another bill would protect providers against out-of-state legal action for abortions performed legally in New York in cases where other states allow anyone to bring civil charges against abortion providers regardless of where they are located, as well as potential. extradition on criminal charges. A handful of other bills are also on the agenda for lawmakers in the state Senate relating to abortion, rounding out the package. Legislation from state Sen. Cordell Cleare and Assembly Member Jessica Gonzalez-Rojas to create a fund for abortion care providers has not been acted on, although on Tuesday, a handful of unions – including the New York Nurses Association – offered their support for the measure that would codify and expand. action already taken by Hochul through executive power. Earlier this month, state Senate Majority Leader Andrea Stewart-Cousins ​​said her chamber would not leave for the year without approving additional abortion protections.

The state Senate is also set to vote Tuesday on a series of voting rights and election reform bills, and is expected to take up more later in the week. The bills on Tuesday’s agenda include part of the New York Voting Rights Act that would establish a statewide voting and elections database to collect currently decentralized information into one location. The rest of the New York Voting Rights Act, which would enshrine in state law a number of protections that have been stripped back at the federal level in recent years, exists in a single bill that recently got amended with the expectation that it too would pass Tuesday. Similarly, legislation relating to the State Board of Elections’ authority to examine voting machines is set for a vote, while companion legislation that would outlaw so-called “hybrid” voting machines that have come under scrutiny over security risks they pose was amended. The package of bills is expected to pass in the Assembly as well.

At long last, New York City Mayor Eric Adams has the actual bill to extend his control of city schools after reportedly reaching a deal with lawmakers last week. The final language falls a little short of his original ask of three years, instead extending mayoral control for just two years. It also changes the school governance structure in order to give parents a greater say as well as creating additional accountability measures for the mayor.

Bill sponsors state sen. Zellnor Myrie and Assembly Member Catalina Cruz surely hope that this year will go better than last year with regards to the Clean Slate Act, which appeared poised to pass before a deal fell apart leaving the bill in limbo. The legislation would clear someone’s criminal record after a certain amount of time following the completion of their sentence provided they don’t face new criminal charges in that time. It’s meant to help formerly incarcerated people reintegrate into their communities and make it easier to find jobs. The bill came close to passing again as part of the budget this year, but again fell short. The final amendment likely represents the culmination of ongoing negotiations between lawmakers and the governor on specific details since Hochul had expressed support for the Clean Slate Act in January.