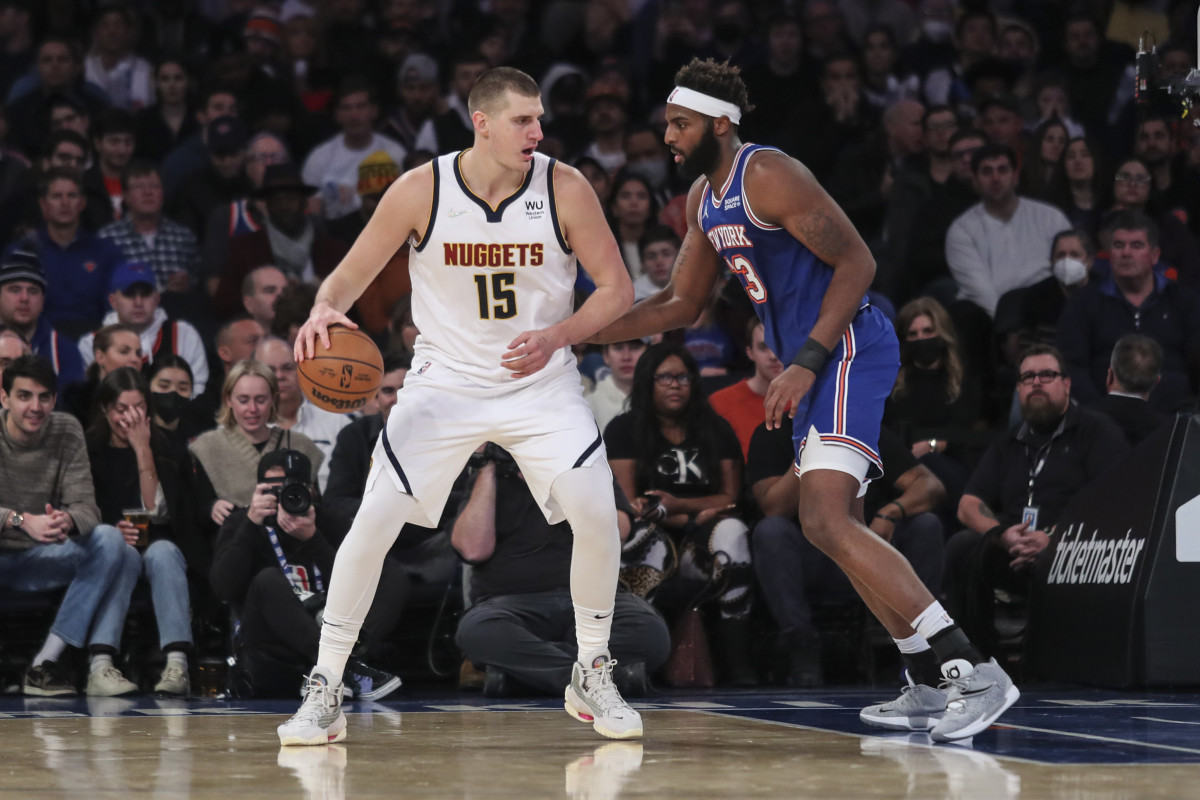 The New York Knicks and the NBA represent a constantly-in-motion thing … and All Knicks, powered by Sports Illustrated, is here to chronicle it for you …

Denver Nuggets center Nikola Jokić has been named the NBA’s Most Valuable Player, according to reports from ESPN Monday morning. He beat out 76ers center Joel Embiid and Bucks forward Giannis Antetokounmpo for the award.

Jokić led the Nuggets to a 48-34 record this season and the sixth seed in the playoffs. Denver drew a first-round matchup with the Golden State Warriors, who proved to be too much for Jokić and Co. in an easy 4-1 series win.

Still, despite being the Warriors’ defensive center of attention, the MVP averaged 31 points, 13.2 rebounds, and 5.8 assists in the series loss.

Jokić and the Nuggets swept the season series with the Knicks this season. In a triple-double effort in an overtime win against the Clippers on Jan. 19, he scored a season-high 49 points to go along with 14 assists, 10 rebounds, and three steals on 16-25 shooting.

The Kings fired head coach Luke Walton during the season and Alvin Gentry was named the interim coach.

MAY 6 ROCKETS PLAN AT NO. 1 The Houston Rockets have a great chance of securing a top-3 pick in the NBA Draft Lottery on May 17. Here’s the maybe-plan from our SI-powered gang in Houston.

MAY 6 MAGIC TO NFL? NBA legend Magic Johnson is entering the massive field of big-name candidates in bidding for the ownership of the Denver Broncos, according to Sportico, joining the bid group being led by Philadelphia 76ers co-owner Josh Harris.

MAY 6 KEMBA TRADE FOR BROGDON? Malcolm Brogdon can run an offense and he can shoot from the perimeter. He could even upgrade the New York defense.

What would be the cost of such a swap? A suggestion here has the Knicks getting Brogdon in exchange for Kemba Walker, Alec Burks and a first-rounder.

MAY 5 COOL HAND LUKA, HOT DRAYMOND The NBA announced Thursday it has fined the Warriors’ Draymond Green $ 25,000 for flipping off fans in Memphis during Tuesday’s Western Conference playoff matchup.

As the Golden State forward entered the locker room in the first quarter Tuesday night in order to get stitches for a right eye laceration, he held up two middle fingers in response to being booed by fans. And after the game …

“You gonna boo someone who was elbowed in the eye and face is running with blood, you should get flipped off,” Green said. “I’ll take the fine. I’ll do an appearance and make up the money. It felt really good to flip them off. … If they are going to be that nasty, I will be nasty, too. I ‘ m assuming the cheers were because they know I’ll be fined. Great, I make $ 25 million a year. I should be just fine. “

The NBA Playoffs are physical. Ask the Dallas Mavs’ Luka Doncic, who is averaging 40 points per game against the Suns, who are up 2-0 while trying to beat up Doncic, who has a responsibility – despite his rep of getting cross-ways with the refs – of being Cool Hand Luka when it comes to T’s.

MAY 4 TYTY TIME Tankathon conducted its latest mock and has the Knicks adding the point guard from Kentucky with the No. 11 overall pick – TyTy Washington. Sensible? Read here.

MAY 3 WHAT’S A DONOVAN DEAL LOOK LIKE? So what exactly does a feasible trade package for Utah’s Donovan Mitchell look like? Most trade hauls for young star players include some combination of picks, young prospects or other winning pieces depending on how much of a rebuild is being planned for. Here’s what we’re thinking …

MAY 3: PHIL’S BACK? Phil Jackson, at age 76, is no longer the coach. But the storied career of the former New York Knicks player, most certainly as a head coach, makes him uniquely qualified to help with the Lakers search …

And his relationship with Jeanie Buss, a prominent member of the Lakers ownership family, probably makes it a nice fit as well.

MAY 2 THE BRUNSON OBSTACLE The New York Knicks will not have the Dallas Mavericks’ help if they want a Jalen Brunson sign-and-trade. The view from the Mavs’ side is here.