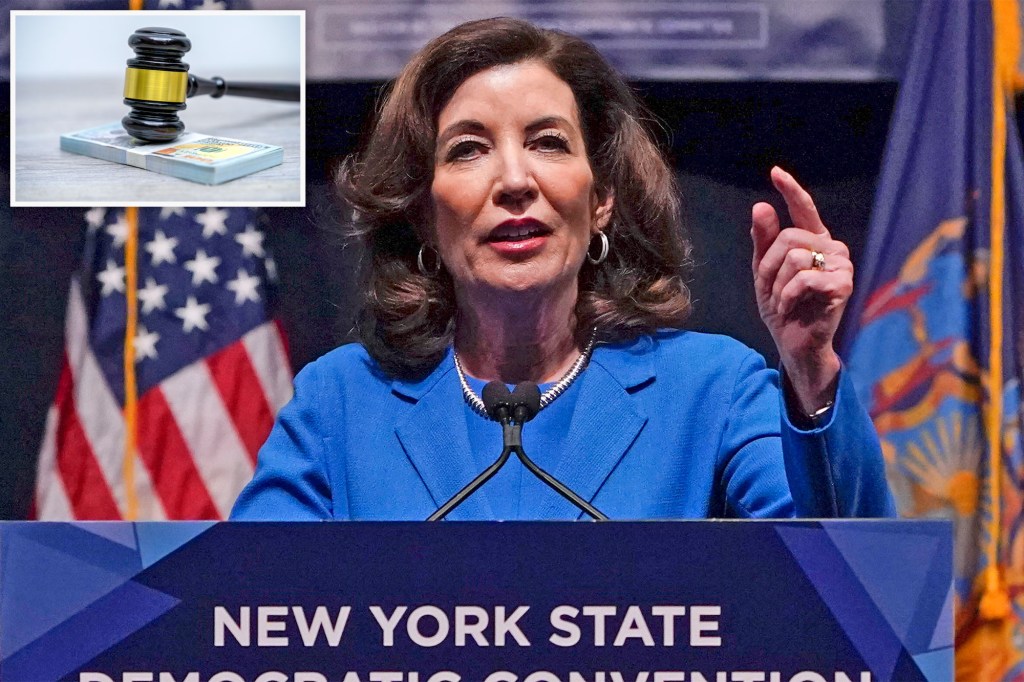 An overwhelming majority of New Yorkers say the no-cash bail law has contributed to the spike in crime and should be overhauled, according to a study released Monday.

A total of 56 percent of voters in the Empire State believe the 2019 bail reform has been bad for New York compared to 30 percent who said it was good policy, the Siena College survey found.

Nearly two-thirds of voters – 64 percent – think the law has resulted in an increase in crime, compared to 24 percent who said it hasn’t.

The poll asked 804 voters if the law approved in 2019 should be amended to give judges more discretion to post cash bail based on the severity of the alleged crime or criminal history of a defendant.

A staggering 82 percent of voters said judges should be given more authority to post bail for more defendants, compared to 11 percent who were opposed.

The clamor for stricter bail comes as Gov. Kathy Hochul and the state Legislature seek to approve a new budget by the Friday April 1 deadline.

Mayor Eric Adams has called for a tougher bail law that includes taking into account the dangerous or criminal record of an accuser.

But Democrats in the legislature – particularly Assembly Speaker Carl Heastie (D-Bronx) and Senate Majority Leader Andrea Stewart Cousins ​​(D-Yonkers) – have been reluctant to make major changes to the bail law they championed. They and other supporters of the law argue that limited data shows that the no-cash bail law has had little to no impact on rising crime rates while allowing defendants to remain free pending trial.

But public opinion has turned against the no-cash bail law during a surge in violent crimes on the streets and in the subway.

Nearly two-thirds of New Yorkers – including at least 60% of Republicans, independents, voters from every region, and white and Latino voters, as well as majorities of Democratic and Black voters – say the bail law has resulted in an increase in crime, ”said Siena College pollster Steven Greenberg.

“And an overwhelming majority of New Yorkers, including at least 72% of voters of every party, region and race, say the law should be amended to give judges more discretion to set bail.”

– 70% of voters support temporarily suspending New York’s gas tax, while only 24% of respondents were opposed.

– A plurality of voters – 48% support putting a $ 4 billion to $ 6 billion environmental borrowing measure on the ballot this fall, compared to 28% who are opposed.

– In a closer call, only 50% of voters support a permanent law to buy to-go drinks from bars and restaurants, while 41% are opposed. Hochul has made extending to-go-drinks post-pandemic a top legislative priority.

– 54% of voters oppose giving people with marijuana convictions or their family members first dibs on obtaining licenses to sell cannabis at retail stores. Only 33% support the preferences for convicts approved by the state Cannabis Control Board,

With baseball season approaching, 40% of voters identified themselves as Yankee fans, nearly double the 20% support for the Mets. Nearly a third of voters said they are not baseball fans and don’t have a favorite team.

Nearly half of voters – 45% – said the Bronx Bombers have a better chance to make it to the World Series, compared to 19% who chose the Amazins’ from Queens.

Ernesto Castro
Oscars controversy shines a light on Jada Pinkett Smith’s ‘struggle’ with alopecia
Tesla wants to split its stock so it can pay a stock dividend; shares gain