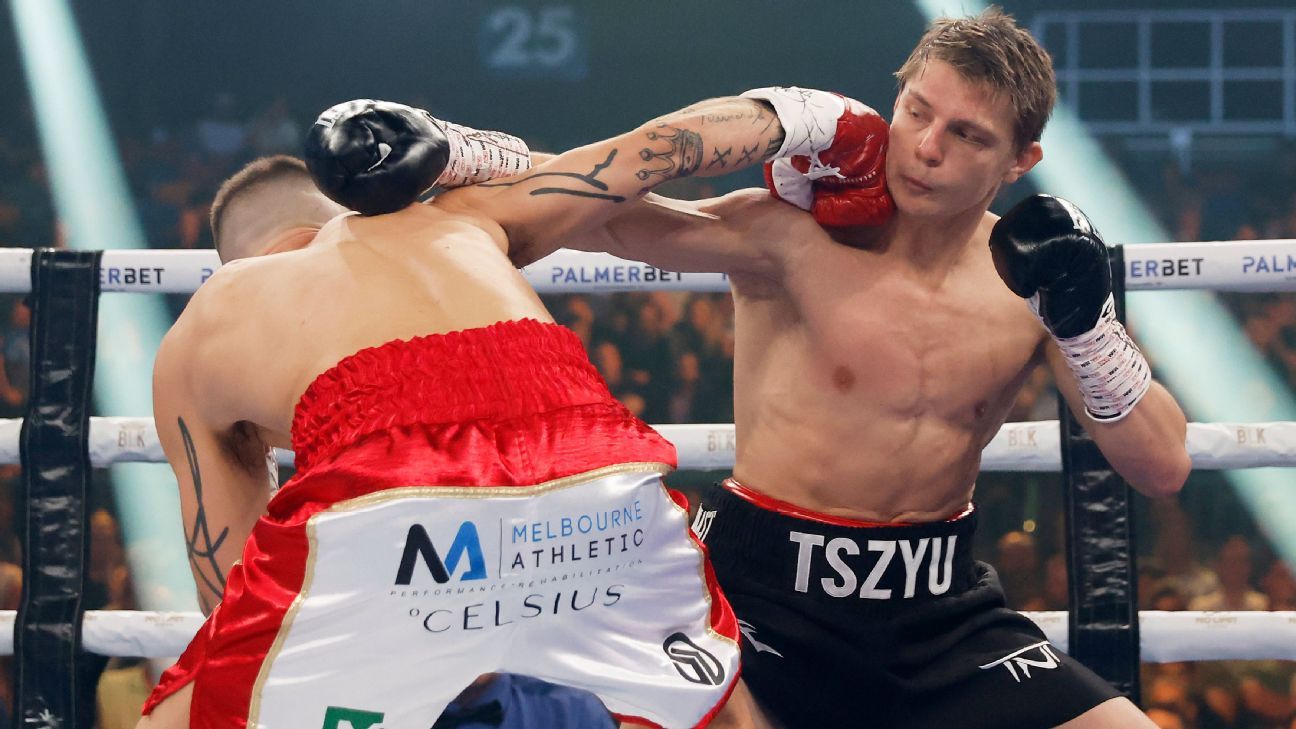 Nikita Tszyu has lived up to the hype and preserved the proud family name with a brutal victory over Mason Smith in a super-welterweight mismatch in Newcastle.

The son of former world champion Kostya and younger brother of undefeated star Tim, Tszyu is fast making his own name after wowing fans with a savage assault on Wednesday night.

Dubbed the “Butcher” for his manic and merciless style, Tszyu floored Mason with a fierce right uppercut barely a minute into the contest.

Mason carried on bravely until the referee stopped the fight with 17 seconds remaining in the opening round.

“It’s the blood that gets me,” Tszyu said after improving his professional record to two from two following his equally emphatic debut win over Aaron Stahl in March.

“I love seeing the blood. That bloody nose. The joy I felt from that.”

Watching on in awe from ringside, Tim Tszyu declared the 27-year-old’s performance perfect.

“I told everyone, ‘Wait till he starts knocking everyone out.’

“Give him time and he’ll be knocking everyone out in the division – except for me.”

Australian users can personalize their ESPN experience by downloading the app. Get live scores, news and videos for the teams and sports you love ANYWHERE, ANYTIME.

Nikita’s victory also gave the famous Tszyu family a perfect 10 from 10 record in Newcastle after Kostya prevailed in all seven of his fights in the steel city before Tim won two from two at the venue last year.

Tim predicted an exciting future for Nikita but said “he’s still got a lot to prove”.

“But the way he’s dealing with everything – the pressure, the TV, the media and performing in his fights – I think he’s doing well,” he told AAP.

“One thing he’s got is a good mindset. He’s always ready to improve.

“He’s very dedicated to what he does and he’s very obsessed.

“When he was doing architecture, it was the same thing. He’d stay up nights and days. For 48 hours once he didn’t sleep. It’s mental.

Forty eight hours he didn’t sleep, got his s *** done and he approaches boxing the same way.

“But he’s got to learn the in and outs. He works hard but he’s very obsessive but in a good way.

“The next few ways for him will be interesting, the way he progresses, the way he adapts for his style.”

Ernesto Castro
Who Do You Believe?: Season Two? Has the ABC TV Series Been Cancelled or Renewed Yet?
Real Housewives Of Beverly Hills Season 12 Taglines Released – Reality Tea