NFL and college football have more opportunities to work together 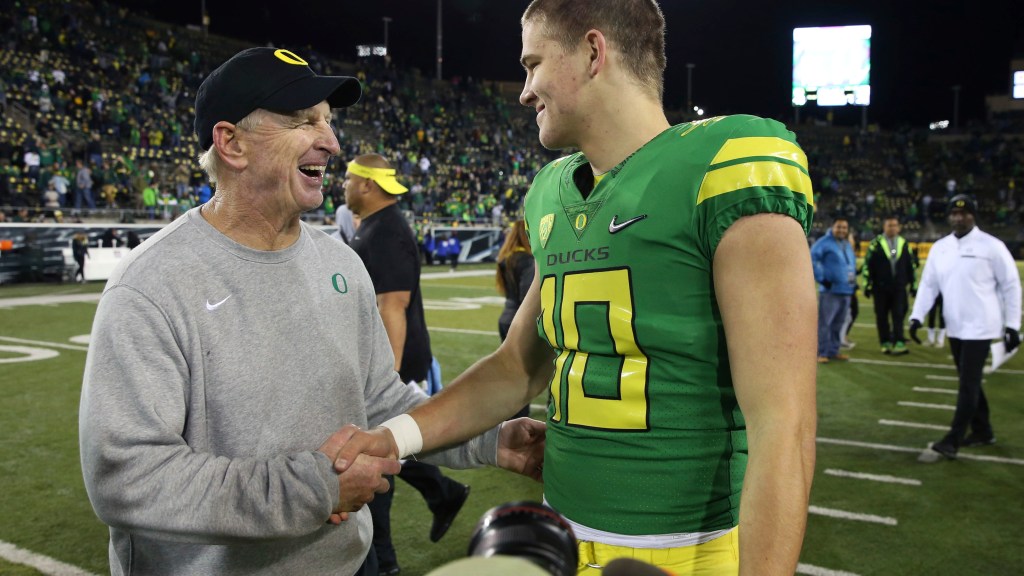 Our friends at Ducks Wire are really excited about the 2022 NFL season, for a few obvious reasons.

First, the New York Giants will play the Detroit Lions. You might see Kayvon Thibodeaux being blocked by Penei Sewell in that game. Two tremendous Oregon players will go against each other.

Second, the Los Angeles Chargers play the Atlanta Falcons later this year, meaning that Justin Herbert and Marcus Mariota will go against each other.

From a USC vantage point, the game between the San Francisco 49ers and Atlanta Falcons will match the two Drakes, Jackson and London, against each other.

The 49ers’ NFC West games against the Arizona Cardinals will pit the USC Niners against Keaontay Ingram of the Cardinals.

Chiefs versus Colts is a battle of USC receivers: JuJu Smith-Schuster for Kansas City versus Michael Pittman for Indianapolis.

All these scenarios created by the new NFL schedule bring up a point: The NFL can work better with college football to reform its schedule.

Let’s note that the NFL now has a 17-game regular season, with some of these games being in Europe or Mexico. If the NFL persists in scheduling games in non-NFL cities, it brings up the obvious point: Why not have one game per year in places where college fans will show up to watch professionals from their respective schools?

For example: The Chargers-Falcons game would be a hit if played in Autzen Stadium. You KNOW that place will be packed for a Herbert-Mariota battle.

For USC fans, the idea of ​​playing an NFL game in the Los Angeles Coliseum just to satisfy a desire to see pro Trojans compete against each other wouldn’t really work. The 49ers and Cardinals would both want a true home game. The Chiefs and Colts would both want a crucial AFC game to be played in an NFL stadium.

Chargers-Falcons, though, is an interconference game, the kind of game which often gets shipped to London and doesn’t have the mammoth stakes of a division or conference game.

Here’s something for the NFL to consider: Precisely because it has a 17th game which doesn’t fit within the parameters of the previously existing 16-game schedule (six division games), that 17th game can be flexed in future schedules to create “college showcases ”such as Mariota vs. Herbert in Eugene, Oregon. It’s a way for the NFL to promote its sport and play more of its games in more places in America, and to create more connectivity with college towns and localities across the country.

Win-win if you ask me… or Ducks Wire.

Every Heisman Trophy winner from current Pac-12 schools since 1970